We are here for you to provide the important Current Affairs February 23 2019, which have unique updates of all daily events from all newspapers such as The Hindu, The Economic Times, PIB, Times of India, PTI, Indian Express, Business Standard and all Government official websites. Changes in the Indian Stamp Act, 1899 approved by President Ram Nath Kovind
On 21st February 2019, President Ram Nath Kovind gave his assent to the amendments to the Indian Stamp Act, 1899,which were introduced in the Parliament as part of the Finance Act 2019. These amendments have been introduced to regularise the system of levying stamp duty and to help in curbing tax evasion.
Key points:
i. For the stamp duty rates, the duties levied by Maharashtra will be taken as a benchmark as the state accounts for 70% of the total collection.
ii. They propose creation of a legal and institutional mechanism which will enable states to collect stamp duty on securities market instruments at one place by one agency(through the Stock Exchanges or Clearing Corporations authorised by the stock exchange or by the Depositories).
iii. They also propose a mechanism for appropriate sharing of the stamp duty with relevant state governments on the basis of state of domicile of the buying client.
iv.There’s also a proposal to create a Coordination Council under Article 263 of the Indian Constitution by a separate order/notification of the President of India for the enactment of the Act.
v. This system is expected to do away with the practice of tax evasion completely and will also lead to minimisation of cost of collection and enhancement of revenue productivity.

Commerce Minister addressed India-Russia Forum on SMEs
An Interactive Forum between Small and Medium Enterprises (SMEs) of India and Russia was held in Bengaluru and was addressed by Union Minister of Commerce & Industry and Civil Aviation, Suresh Prabhu for working to address and resolve trade and investment issues to facilitate and increase private sector cooperation.
i. India has already announced setting up of a fast track, single-window mechanism for Russian companies which would be chaired by Department for Promotion of Industry and Internal Trade (DPIIT) Secretary.
ii. This mechanism would be in addition to the Russia Desk that had been set up to promote Russian investment in India.
iii. SMEs being less informed about the schemes that exists in both the countries, a need to curate a digital bridge between the economies so that SMEs can benefit from it was addressed. 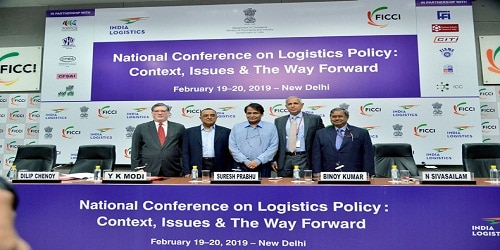 i. Union Minister of Commerce & Industry and Civil Aviation, Suresh Prabhu, addressed the first stakeholder consultation on the draft logistics policy prepared by the Department of Logistics of the Ministry of Commerce & Industry.
ii. He also launched the SAFAR Mobile App, on this occasion.About the app:

iii. Special Secretary, Logistics, N. Sivasailam, said that the logistics business in the country is worth USD 160 billion and is growing at 7% – 8 % every year and the main objectives of the policy are to reduce logistics cost from 14% to 10% of GDP, create additional 10-15 million jobs in the sector, become a single point for all logistics & trade facilitation and reduce losses in agriculture to less than 5%, by facilitating agri-logistics in the country. 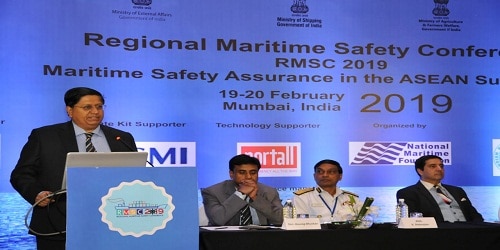 i. It was organized by India for the first time, by the National Maritime Foundation (NMF), in coordination with Ministry of Shipping and Ministry of External Affairs.
ii. It addressed a range of issues that affect regional maritime safety, including transport safety, maritime law, ship building, transportation of hazardous goods, marine oil spill, pollution and environmental safety.
iii. UnionShipping and Water Resources Minister,Nitin Gadkari inaugurated an upgraded version of e-commerce portal Port Community System (PCS) called ‘PCS1x’, developed in record time by the Indian Ports Association, based on feedback from stakeholders using PCS. 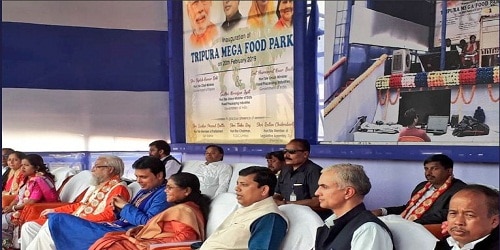 i. It has been set up on 50 acres of land at the cost of Rs 87.45 crore and the Government of India has approved a financial assistance of Rs 50 Crore to the project.
About Tripura
♦ Capital – Agartala
♦ Chief Minister – Biplab Kumar Deb
♦ Governor – Prof. Kaptan Singh Solanki

UP CM Yogi Adityanath Launches Scheme for Adolescent Girls
Uttar Pradesh Chief Minister, Yogi Adityanath launched a scheme for adolescent girls aged between 11 to 14 years, who have left their education and will take steps to provide them proper nutrition and special care.
i. UP Government decided to observe 8th of every month as Adolescent Girls Day, at Anganwadi Centres across the state, and Nutrition Campaigns will be organized for these girls on that day.
About Uttar Pradesh
♦ Capital – Lucknow
♦ Chief Minister – Yogi Adityanath
♦ Governor – Sri Ram Naik 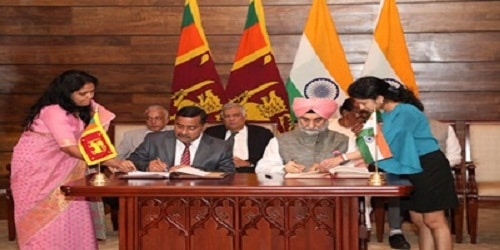 The MoU was signed in Colombo, Sri Lanka by High Commissioner of India to Sri Lanka Mr. Taranjit Singh Sandhu, and Secretary, Ministry of Development Strategies and International Trade Mr. S. T. Kodikara in presence of Sri Lankan Prime Minister Ranil Wickramasinghe.
Key points:
i. The centre is being set up to create a conducive environment for Information Communication Technology (ICT) and other professional services in the Northern region which is inhabited by minority Tamils.
ii. Other development projects in Jaffna which have been funded by India are-construction of Cultural Centre in Jaffna, school buildings of 27 schools, 3000 rainwater harvesting units and 25 model villages etc.
iii. This takes India’s total development assistance to Sri Lanka to around 3 billion US$, out of which 560 million US$ is pure grant assistance.

European Union agrees on greenhouse gas emission cut for trucks
On 19th February 2019, the European Union(EU) and the Council agreed on reducing carbon dioxide (CO2) emissions from new trucks and buses by 30 percent by 2030. This reduction shall be in comparison to the 2019 levels.
i. It’s going to be a step-by-step process with a15 percent reduction target set for 2025 and the 2030 target will be reviewed in 2022.
ii. Presently, trucks generate almost a quarter of European Union’s (EU) transport-related emissions and it has imposed no limits on emissions from heavy-duty vehicles, unlike the United States, China, Japan and Canada.

Srei Equipment, Syndicate Bank to jointly provide equipment financing under co-lending arrangement
Srei Equipment Finance, a wholly-owned subsidiary of Srei Infrastructure Finance, has collaborated with Syndicate Bank to provide equipment financing under co-lending arrangement for various equipment categories like construction, mining, material handling, commercial vehicles, medical and farm equipment.
i. The arrangement requires Syndicate Bank to utilise its low-cost funds and co-lend equipment loans with Srei at a rate which has been mutually agreed on.
ii. It has been done under the aegis of Reserve Bank of India (RBI) circular dated September 21, 2018 that allows banks to collaborate with non-banking finance companies (NBFCs) to co-originate loans for the creation of assets for priority sector.
iii. Loans under this programme will be sourced by iQuippo a Kanoria Foundation initiative- India’s first digital marketplace for construction equipment, machinery and services. 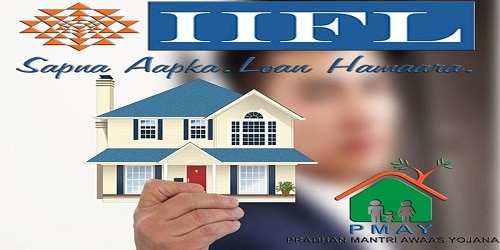 i. Through this MoU, the Housing Department of Maharashtra will provide permissions and enable IIFL Home Finance (IIFL HFL) to spread awareness among customers about the benefits of PMAY through presentations, counselling, calls and messages. 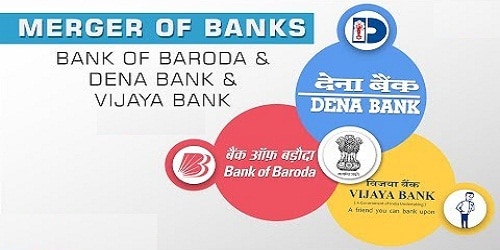 i. This scheme has been named as ‘Amalgamation of Vijaya Bank and Dena Bank with Bank of Baroda Scheme, 2019’.
ii. According to the Scheme of Amalgamation-

CBDT set up panel to help bring down tax litigation
The Central Board of Direct Taxes (CBDT) formed a 4-member committee, headed by income tax commissioner Sanjeev Sharma, to look into the matter of taxation related pain points and submit its final report and recommendations by mid-March.
i. It will tackle the issue by addressing some current pain points and recommending some steps borrowed from international best practices.

Divya Karnad became First Indian Woman to receive Future of Nature Award
33-year-old Ashoka University teacher and Wipro Sustainable Fellow, Divya Karnad became the First Indian Woman to be honoured with the “Global Future of Nature Award” for her work on marine conservation.
i. She is the second Indian to receive this award after Dr. Charudutt Mishra.
ii. The award is given to 3 people annually, and this year it was given to Olivier Nsengimana and Fernanda Abra along with Divya Karnad.
About Global Future of Nature Award
It is a prestigious international award that celebrates achievements in protecting wild animals and plant species.

i. At a cost of USD 100 million, it is the lowest-budget spacecraft to ever undertake such a mission. It is part of renewed global interest in the Moon, sometimes called the “Eighth Continent” of the Earth.
ii. The project is funded almost entirely by donations making it the first privately backed lunar lander mission.It was notably financed by businessman and philanthropist Morris Kahn. Other partners include Israel Aerospace Industries (IAI), Israel’s space agency and Israel’s Ministry of Science and Technology.
iii. Beresheet carries a “time capsule” loaded with digital files containing a Bible, children’s drawings, Israeli songs, memories of a Holocaust survivor and the blue-and-white Israeli flag.
iv. Landing is the main mission, but the spacecraft also carries a scientific instrument to measure the lunar magnetic field, which will help understanding of the Moon’s formation.
v. It is estimated it will land on 11 April after a 4m-mile (6.5m-km) journey.
vi. With this, Israel became the 4th country after Russia, USA and China to carry out a 384,000km journey and land a spacecraft on the Moon.
vii. The Falcon 9 rocket also contains an Indonesian satellite and a satellite of the US Air Force Research Laboratory.
Related Points
India hopes to become the 5th lunar country with its Chandrayaan-2 It aims to put a craft with a rover onto the Moon’s surface to collect data.

Scientists have discovered 300,000 new galaxies using a Low-Frequency Array (LOFAR) telescope
A study conducted by 200 scientists from 18 countries has led to discovery of 300,000 new galaxies using a Low-Frequency Array (LOFAR) telescope in Netherlands.
i. LOFAR is capable of detecting low radio frequencies which is not visible to other telescopes. Thus, scientists could spot lakhs of light sources, which were once too faint to be detected from Earth.
ii. The telescope has a very high sensitivity and detects traces or “jets” of ancient radiation produced when galaxies merge.

World’s largest bee spotted the first time since 1981
Wallace’s giant bee– the largest bee known on the Earth which was considered to be extinct since 1981 was re-spotted in an Indonesian forest.
i. Scientists spotted a female bee of the species Megachile pluto and its size is four times the size of the typical European honeybee and has a wingspan of 2.5 inches. 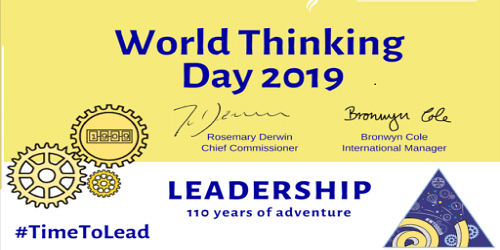 i. The theme of World Thinking Day 2019 is ‘Leadership’. The aim is to learn the different ways to be a leader and develop the power to bring the change a person wants to see in the world.
ii. The day is significant as it was the birthday of Scouting and Guiding founder Lord Robert Baden-Powell and of Lady Olave Baden-Powell, his wife and World Chief Guide.