Crown Prince Mohammed bin Salman bin Abdulaziz Al Saud, Deputy Prime Minister and Minister of Defence of the Kingdom of Saudi Arabia, paid his first visit to India from 19-20 February 2019, at the invitation of Prime Minister Narendra Modi, and under the guidance of the Custodian of the Two Holy Mosques. 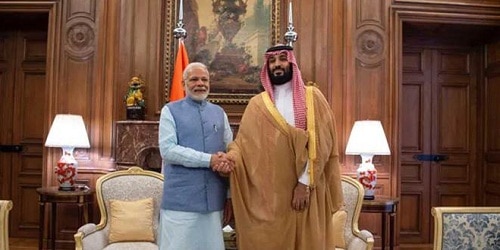 i. The visit followed the official visit of PM Modi to the Kingdom of Saudi Arabia in April 2016 at the invitation of the custodian of the Two Holy Mosques His Majesty King Salman bin Abdul Aziz Al Saud.
ii. He was received at the Palam airport by the PM Modi and was accorded a ceremonial welcome on 20th February, 2019 at the Forecourt of the Rashtrapati Bhawan, New Delhi. President Ram Nath Kovind also hosted a banquet dinner in honour of him.
iii. PM Modi and Mohammed bin Salman bin Abdulaziz held delegation level talks at Hyderabad House on 20th February 20, 2019. The two sides re-affirmed their deep commitment to strengthen the ‘strategic partnership’ envisaged in the ‘Riyadh Declaration’ of February 2010.

Agreements and MoUs signed during the visit
i. Saudi Arabia signed the framework agreement of the International Solar Alliance (ISA) and became the 73rd country to join the India-led renewable energy organisation which now has a total of 122 members.
ii. Apart from this, the following 5 MoUs were signed: