We are here for you to provide the important Current Affairs February 15 2019, which have unique updates of all daily events from all newspapers such as The Hindu, The Economic Times, PIB, Times of India, PTI, Indian Express, Business Standard and all Government official websites. UNICEF in Maharashtra joined hands with Goa WCD for addressing issues in child protection
In order to focus on the issues in the area of child protection in the state, the UNICEF in Maharashtra joined hands with Goa Women and Child Development (WCD).
i. Discussion was held on “Key challenges around child protection in Goa” at a training programme on Integrated Child Protection Scheme(ICPS), by WCD, which saw the participation of Ms. Rajeshwari Chandrasekar, Chief Field Officer,UNICEF Maharashtra and Ms. Alpa Vora, Consultant, Child Protection, UNICEF.
ii. Issue of migrant children who face a whole lot of different problems linked with challenges of livelihood, alcoholism, etc., of their poor parents, or the children themselves were brought to light, among other issues.
About Maharashtra
♦ Capital – Mumbai
♦ Chief Minister – Devendra Fadnavis
♦ Governor – C. Vidyasagar Rao
About Goa
♦ Capital – Panaji
♦ Chief Minister – Manohar Parrikar
♦ Governor – Mridula Sinha 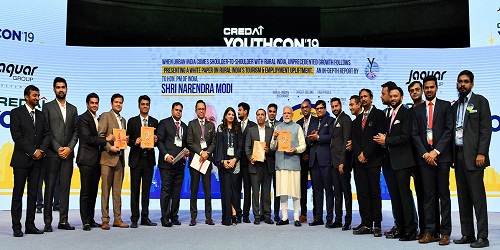 i. Gautam Chatterjee, Maharashtra RERA Chief,said that the main objective of RERA (Real Estate Regulatory Authority) is transparency with other objectives being projects to help builders overcome difficulties and improve trust between builders and buyers.
ii. Prime Minister Narendra Modi was the Chief Guest of CREDAI-YouthCon 2019.He announced that about 1.5 crore houses have been built under PM Awas Yojna out of which 15 lakhs are built for poor people in urban areas. 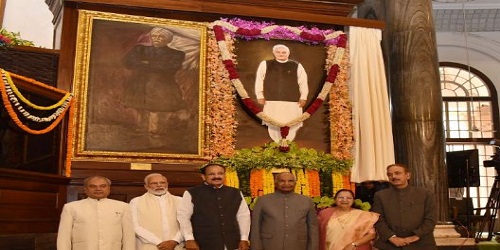 i. It was done in the presence of Vice President Venkaiah Naidu, Prime Minister Narendra Modi, Lok Sabha Speaker Sumitra Mahajan, Leader of Opposition in the Rajya Sabha Ghulam Nabi Azad, Union Ministers, and leaders of various parties.The portrait was made by Krishna Kanhai.

Universal Old Age Pension scheme has been announced by Bihar Government
Bihar Chief Minister, Nitish Kumar announced an Universal Old Age Pension scheme, named Mukhya Mantri Vriddha Pension Yojana (MMVPY), irrespective for all caste, community, religion, except for those who are retired from government organizations.
Key points
i. The scheme facilitates the amount of Rs. 400 monthly pension for all in the state above the age of 60 years who are not getting pension from the government.
ii. The scheme will come into its enforcement from 1st April, 2019.
iii. Other than this scheme, Bihar’s govt. has also proclaimed a pension of Rs. 6,000 for journalists above 60 years of age, which will get implemented from 1st April, 2019.
iv.Currently old age pension scheme is applicable to only the BPL category.
About Bihar
♦ Capital- Patna.
♦ CM- Nitish Kumar
♦ Governor- Lalji Tandon

PM-Kisan scheme and Annadatha Sukhibhava scheme has been amalgamated by Andhra Pradesh
Andhra Pradesh has made a significant move by merging Pradhan Mantri Kisan Samman Nidhi Yojana with its own Annadatha Sukhibhava scheme. This move will further allow a fixed amount of Rs. 10,000 per annum to all farmers in the state, irrespective of the size of their land.
Key points
i. The benefits will be facilitated in 2 portions of Rs. 5000 before the Kharif and Rabi crop cycle.
ii. Around 70 lakhs farmers will get advantage from this merger.
iii. As PM-Kisan scheme covers only marginalized farmers but, Annadatha Sukhibhava scheme also covers tenant farmers, who will be facilitated with ‘Cultivation Certificates’ and ‘Loan Eligibility Certificates’ to avail the benefits of scheme.
iv. Other than Rs. 6000 per household which will given under PM Kisan Samman Nidhi, farmers will also receive Rs. 4000 from Andhra Pradesh government, which will further benefit 54 lakhs farmers.
Andhra Pradesh
♦ Capital- Amaravati, Hyderabad
♦ Chief Minister- N. Chandrababu Naidu.
♦ Governor- E.S.L. Narasimahan

WHO and ITU issued new standard for Music Devices to make them safe for listening
Ahead of World Hearing Day, the World Health Organization (WHO) and International Telecommunication Union (ITU) have issued a new international standard regarding fabricating and utilization of musical devices, which includes smart phones and audio players, to make them safe for listening.
Key points
i. The motto and aim behind this move is to avert hearing loss among 1.1 billion young people who use musical devices most often. As 50% of the people who lie in age group of 12-35 are at risk of getting deaf due to prolong and immoderate exposure to loud sounds, they listen via their music devices.
ii. It is estimated that by 2050, around 900 million people will have loss of hearing.
iii. This new standard for music device was develop under WHO’s “Make Listening safe” initiative, drawing on the latest evidences and consultations. These standards will recommend Sound allowance function, Personalized profile, Volume limiting options, general information and guidance.
About WHO
♦ Headquarter: Geneva, Switzerland
♦ Director General: Tedros Adhanom
♦ World Hearing Day – 3rd March.

Yes Bank cleared of Divergence charges imposed by RBI
On 13th February 2019, The Reserve Bank of India cleared Yes Bank of Divergence charges i.e. disparity in reporting bad loans and provisioning numbers for the year ended March 2018.
Key points
i. The final report has observed nil divergence in the bank’s asset classification and provisioning from the norms of the RBI.
ii. In FY16, after its first assessment, Yes Bank was found divergence of Bad loans by RBI at Rs. 4,176 crore higher than the reported gross NPA of Rs. 748.9 crore. Further, in FY17, Yes Bank was found to be divergence again at Rs. 6,355 crore and reported gross NPA of Rs. 2,018 crore lower than RBI’s estimation of Rs. 8,373 crore.
About Yes Bank
♦ Interim CEO- Ajai Kumar
♦ Head Quarter- Mumbai
♦ Tagline- Experience our Expertise

RBI imposes penalties on Various Banks for violating various norms
The Reserve Bank of India (RBI) has penalised various banks for not complying with various norms of RBI. i. HDFC Bank, Kotak Mahindra Band and IDBI Bank were fined Rs 2 million each for non-compliance with respect to Know Your Customer (KYC) norms and Anti-Money Laundering (AML) standards.
ii. Allahabad Bank, Andhra Bank, Indian Overseas bank and Bank of Maharashtra were penalised for not following directions set by RBI on monitoring end use of funds, exchange of information with other banks, classification and reporting of frauds and restructuring of accounts. The penalty was Rs 10 million for Andhra Bank and Rs 15 million each for others.
iii.Bank of Baroda and Union Bank of India has imposed a penalty of Rs 1 crore each for violating various banking norms.
About RBI
♦ Governor – Shaktikanta Das
♦ Headquarters – Mumbai Key points
i. These Sig Sauer Assault rifles are 7.62*51 mm which are compact, robust, advance in technology and easy to maintain in field conditions.
ii. These new rifles will come at a cost of around Rs. 700 Crore and will be used by the army troops deployed along the 3,600 km China’s border.
iii. As the contract is made under Fast-Track Procurement (FTP), the assault rifles will be made and supplied within a year.
iv. Out of 72,400 rifles, around 66,000 are for the Indian Army and rest 2000 for Indian Navy and 4000 for the Indian Air Force.
About USA
♦ Capital- Washington, D.C.
♦ Currency- US Dollar.
♦ US President- Donald Trump

i. A Star is Born has received 8 Oscar nominations including best actor for Bradley Cooper and best actress for Lady Gaga. 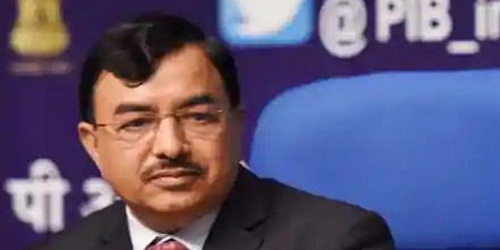 Key points
i. Mr. Sushil Chandra is an IIT graduate and is a1980 batch officer of the Indian Revenue Service (IRS),was recently retired from CBDT.
ii. Mr. Chandra was appointed CBDT Chairman on November 1, 2016 and further he got 2 extensions.
iii. The Election Commission now has Sunil Arora as the Chief Election Commissioner who will succeed O.P. Rawat and Ashok Lavasa and Sushil  Chandra as fellow commissioners.
iv.He made this appointment by exercising the powers given under clause (2) of Article 324 of the Constitution.

Air India reappoints Ashwani Lohani as CMD
Ashwani Lohani, former chairman of Railway Board, has been reappointed as the Chairman and Managing Director (CMD) of Air India for the second time after his previous tenure from August 2015 to August 2017. 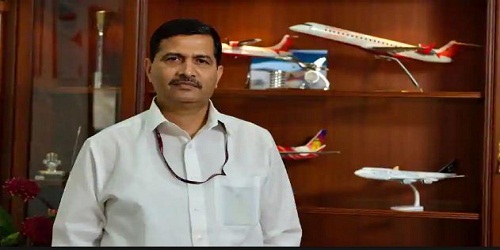 i. He assumed the charge from 14th February 2019, replacing Pradeep Singh Kharola, who is appointed as the new Secretary, Ministry of Civil Aviation.

CEO of DHFL, Harshil Mehta resigned from his post
Dewan Housing Finance Corporation Limited (DHFL) has notified that its CEO Harshil Mehta has resigned from his position with immediate effect on 13th February, 2019.
Key Points
i. Mr. Mehta will further hold the position of DHFL’s Executive President in Retail business from 14th February, 2019.
ii. DHFL’s board has further appointed Sunjoy Joshi as an Independent Director and Srinath Sridharan as a Non-Executive director.
iii. DHFL through layers of shell companies allegedly moved Rs. 31,000 crore out of total Rs. 97,000 crore of bank loans by sanctioning and disbursing amounts in unsecured loans.

A new snake species “Hebius lacrima” discovered in Arunachal Pradesh
A non-venomous snake species has been discovered by Herpetologists Jayaditya Purkayastha of Help Earth, Guwahati and Patrick David of Museum National d’Histoire Naturelle, Paris in Guwahati, Arunachal Pradesh.
Key Points
i. The Snake has been named as “Crying Keelback (Hebius lacrima)” due to the presence of black spots below the snake’s eye which is taken as an allusion for crying.
ii. The 48 mm long Snake is found is “jhum” (shifting) cultivation areas in the Basar area West siang district of Arunachal Pradesh in 2010-11.
iii. The Discovery of snake is published in a peer reviewed journal for animal taxonomy known as “Zootaxa”.
About Arunachal Pradesh
♦ Capital: Itanagar
♦ Governor: B.D. Mishra
♦ Chief Minister: Pema Khandu

Derrick Pereira becomes the India U-23 Football team coach
Derrick Pereira is set to become the coach of the Indian Under-23 football team for the upcoming Asian Football Confederation (AFC) qualifiers, to be held in Tashkent, Uzbekistan from 22nd March.
i. He will take charge from the preparatory camp in Goa that begins on 2nd March.
ii. A friendly match between Qatar U-23 and India U-23 is also scheduled in Doha on 11th March 2019.
About AFC
♦ President – Salman Bin Ibrahim Al-Khalifa
♦ Headquarters – Kuala Lumpur, Malaysia
About Uzbekistan
♦ Capital – Tashkent
♦ Currency – Uzbek Som
♦ President – Shavkat Mirziyoyev i. He was awarded half of the Nobel Prize in Chemistry on 1967 for his work in measuring extremely fast chemical reactions. He had shared this prize with R. G. W. Norrish and George Porter.

Telugu Film Director, Vijaya Bapineedu, dies at age 83
Vijaya Bapineedu, Telugu director-producer, known for giving several hit films to actor Chiranjeevi, passed away on 13th February, 2019 at the age of 83 years.He was passed away in Hyderabad, Telangana.He was born in Andhra Pradesh.
i. His movie ‘Gang Leader’ was remade in Hindi as ‘Aaj ka Goondaraj’ with Chiranjeevi in the lead. Other hit movies include ‘Big Boss’, ‘Khiladi No. 786’ and ‘Maga Dheerudu’.