We are here for you to provide the important Recent and Latest Current Affairs 7 August 2021, which have unique updates of Latest Current Affairs 2021 events from all newspapers such as The Hindu, The Economic Times, PIB, Times of India, PTI, Indian Express, Business Standard and all Government official websites. The Union Cabinet, chaired by Prime Minister Narendra Modi, approved the Constitution (127th) Amendment Bill, which will restore the power of States and Union Territories (UTs) to make their own Other Backward Class (OBC) lists.

Background:
i.Through the 102nd Constitution Amendment Act of 2018, Articles 338B and 342A were included in the constitution to remove the powers vested with States and UTs to create their own OBC list.

iii.By referring to Article 342A, the Supreme Court has barred the Maharashtra government from granting reservations to Marathas and stated the Centre’s only power to draw up a single ‘central’ OBC list.
About National Commission for Backward Classes (NCBC):
It is a Constitutional Body under Article 338B of the Constitution of India under the Ministry of Social Justice & Empowerment.
Chairman – Bhagwan Lal Sahni
Headquarters – New Delhi

India’s first Water Villas will be set up in Lakshadweep For the first time in India, water villas will be set up in the Union Territory (UT) of Lakshadweep with an outlay of Rs 800 crore. Similar to water villas in Maldives, these will be solar-powered and eco-friendly to provide world-class facilities. 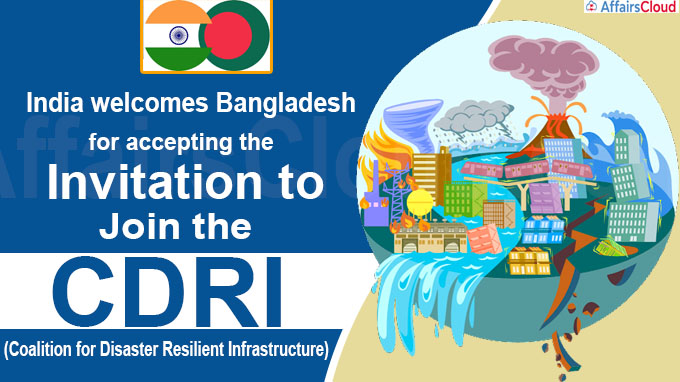 Bangladesh and Canada joined the Coalition on Disaster Resilient Infrastructure (CDRI), an initiative of India launched by Prime Minister Narendra Modi at the UN Climate Action Summit in September 2019. 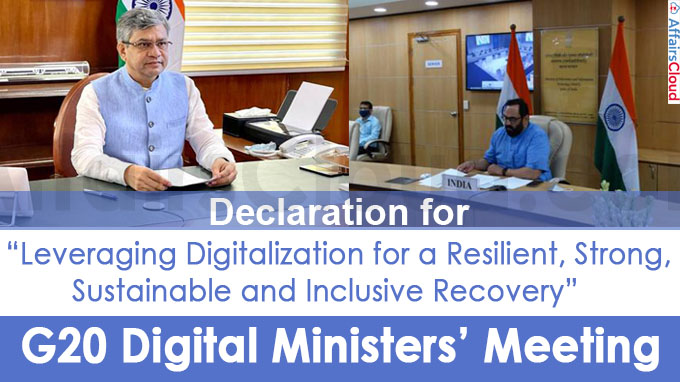 Highlights of the Third Bi-Monthly Monetary Policy of FY21-22 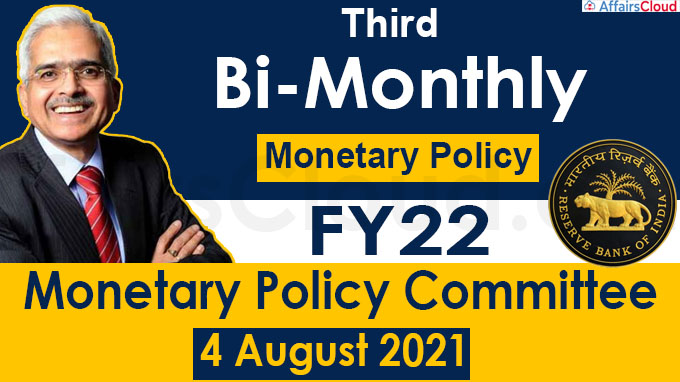 The Reserve Bank of India’s (RBI) 6-members Monetary Policy Committee (MPC) had met on 4th, 5th and 6th August 2021 and released its third bi-monthly monetary policy statement for FY22 (April 2021 – March 2022).
Policy Rates:
The Policy rates were kept unchanged, which are as follows: 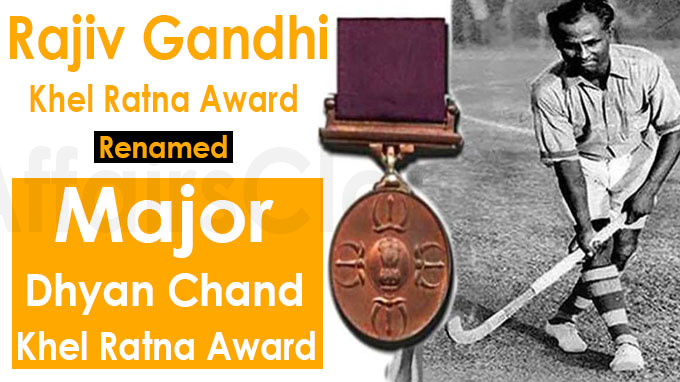 The Highest sporting honour of India, “Rajiv Gandhi Khel Ratna Award”, has been renamed as “Major Dhyan Chand Khel Ratna Award” in honour of the hockey Wizard Dhyan Chand.
Prime Minister Narendra Modi stated that the renaming was based on the request from the citizens across India to name the Khel Ratna Award after Dhyan Chand
About Khel Ratna Award:
i.The Khel Ratna Award named after former Prime Minister Rajiv Gandhi was instituted in 1991-1992 and the inaugural award was presented to Vishwanath Anand(Chess).
ii.The award is annually presented by the Ministry of Youth Affairs and Sports.
iii.The award consists of a cash prize of Rs 25 lakh, a medallion and a certificate.
About Dhyan Chand:
i.Major Dhyan Chand, who was known as ‘The Wizard’, was an Indian Hockey player who represented the Indian hockey team from 1926 to 1949.
ii.He has scored more than 400 goals during his career.
iii.He has won 3 consecutive gold medals in the 1928, 1932 and 1936 Olympics.
Honours:
i.The government of India has honoured him with the Padma Bhushan in 1956.
ii.Since 2012, the birth anniversary of Dhyan Chand has been celebrated as National Sports Day(29th August).

Mahatma Gandhi National Council of Rural Education (MGNCRE) under the Ministry of Education has recognised the Chitkara University in Patiala as the ‘District Green Champion’ for the academic year 2020-2021.
Dr Madhu Chitkara, Pro-Chancellor of Chitkara University received the award in the presence of Kumar Amit, Deputy Commissioner, Patiala. i.In 2016, On the occasion of ZSI’s centenary celebrations, Banerjee co-authored the document titled ‘The Glorious 100 women’s Scientific Contribution in ZSI’. It highlights the contributions made by women scientists on studies related to different animal groups.
ii.Although formed in 1916, ZSI started hiring women scientists only from 1949. Mira Mansukhani was the 1st women scientist of ZSI.
iii.Thomas Nelson Annandale was the 1st Director-General of ZSI.
Background 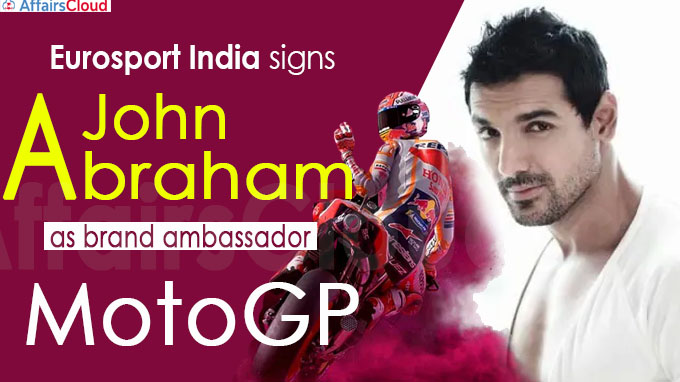 Eurosport India, an Indian sports channel of Discovery Asia-Pacific has appointed Bollywood Actor John Abraham as India ambassador for its flagship motorsport property MotoGP.
Yamaha’s R15 is the co-presenting sponsor for the MotoGP broadcast in India.

About MotoGP:
i.The Grand Prix Motorcycle racing is popularly known as MotoGP.
ii.MotoGP is the motorcycle road racing event organised on road circuits and it is sanctioned by the Fédération Internationale de Motocyclisme (FIM)
Additional info:
i.The motorsport properties of Eurosport India includes MotoGP, FIA Formula 2 Championship, W Series, Nascar, Indycar Series and Bennetts British Superbike racing.
ii.Eurosport and the over-the- top(OTT) video streaming platform Discovery+ have the broadcasting rights of all the three premier classes, such as Moto 2, Moto 3 and Moto GP for their Indian audience.
About Eurosport India:
Eurosport is a part of the Discovery, Inc.,
Head– Vijay Rajput
Launched in 2017 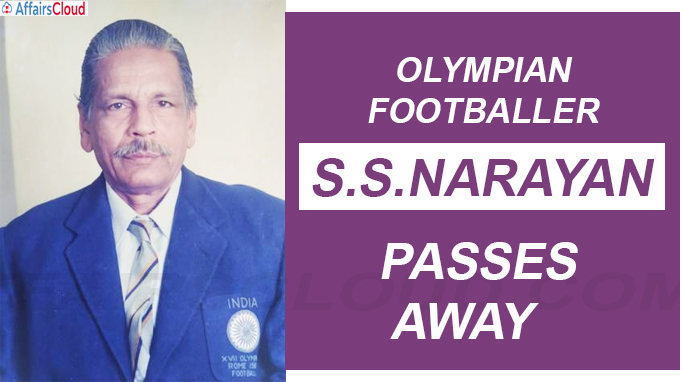 India’s former football goalkeeper & 2 time Olympian Shankar Subramaniam Narayan (86) also known as S.S. ‘Babu’ Narayan passed away due to cardiac arrest in Thane, Maharashtra.
i.He was born in 1934 at Palakkad district of kerala.
ii.Narayan was also part of Indian team that finished 2nd in the 1964 AFC Asian Cup and the 1958 Asian Games. 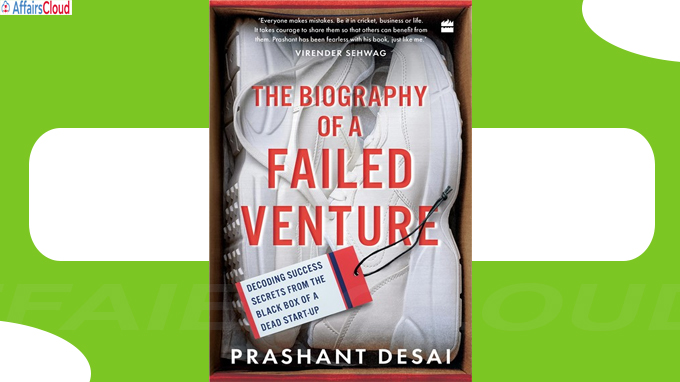 Founder of D:FY, India’s first Sports brand, Prashant Desai has authored a new book titled “The Biography of a Failed Venture: Decoding success secrets from the Black box of a Dead Start-up”.
The book published by HarperCollins Publisher India, features the accounts on why the brand “D:FY failed and how entrepreneurs can avoid these mistakes and become successful.
About Prashant Desai:
i.Prashant Desai, a Senior Director at Everstone Capital, is currently serving as the strategy and investor relations at Burger King India.
ii.He is a Chartered Accountant and an all India 4th ranked Cost and Works Accountant.
ii.He started the startup KAN D:FY Sports Pvt. Ltd, a made in India technology-based sports brand in 2017.
iii.He has also worked with the Future Group, Rare Enterprises and has been the CEO and MD of Financial technologies. Hiroshima Day is annually observed across the globe on the 6th August to remember the victims of the world’s first atomic bombing on Hiroshima, Japan during World War II(WW2).
The day also aims to create awareness about the adverse effects of Nuclear power and nuclear weapons and to promote world peace.
6th August 2021 marks the observance of the 76th anniversary of Hiroshima Day.
Background:
i.On 6th August 1945, the United States of America dropped the first nuclear bomb named “Little Boy” on the City of Hiroshima which killed more than 140,000 people, which is around 39% of its population and later on 9th August 1945, the 2nd bomb named “Fat Man” was dropped on Nagasaki killing another 40000 people.
ii.The first Hiroshima Day was observed on 6th August 1947.
>>Read Full News 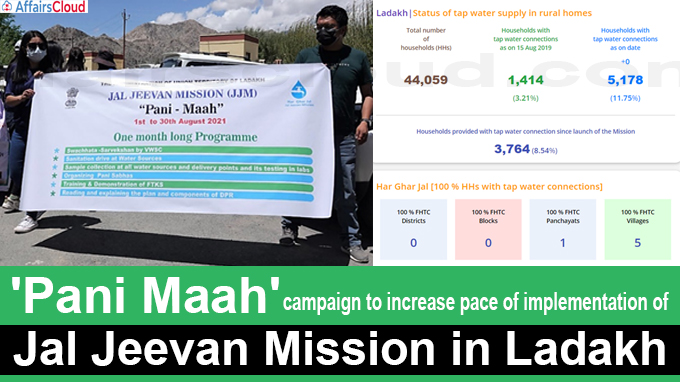 Lieutenant Governor of Ladakh RK Mathur launched a month-long campaign named ‘Pani Maah (water month)’ to accelerate the implementation of Jal Jeevan Mission (JJM) and to inform and engage village communities on the importance of clean water in the Union Territory (UT) of Ladakh.
i.The campaign includes 2 phases to be run at the Block and Panchayat levels.
ii.During the 1st phase (August 1 to 14th), water samples will be collected from all identified sources and service delivery points for testing.

iii.During the 2nd phase from (August 16 to 30th) water quality test reports and analysis with the villagers in an open forum.
iv.An award of INR 5 lakh per village has been announced to the first 5 Har Ghar Jal villages of each district, and INR 25 lakh to the first Har Ghar Jal Block in each District of Ladakh.
About Jal Jeevan Mission (JJM)
It was launched on August 15th 2019 and is implemented by the Ministry of Jal Shakti. BDL signs MoU with UPEIDA to Invest in UP Defence Corridor 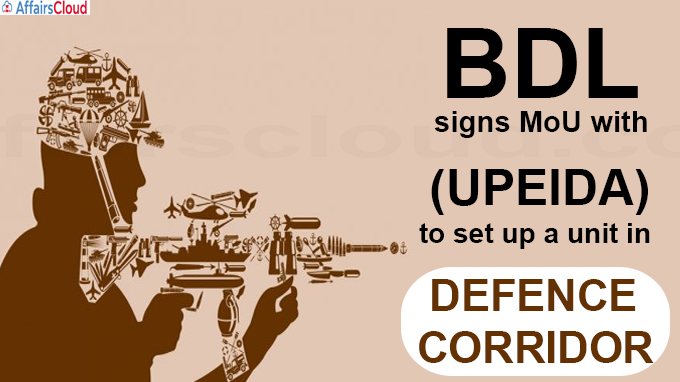 Bharat Dynamics Ltd (BDL) has signed a Memorandum of Understanding (MoU) with Uttar Pradesh Expressways Industrial Development Authority (UPEIDA) to establish a manufacturing unit in the UP Defence Industrial Corridor, which is under-construction.

The Government of Kerala launched the ‘COVID-19 Death Information Portal’, designed and developed by eHealth Kerala,  to ensure transparency and maintain a proper record of the number of deaths due to COVID-19. The government institutions and the general public have access to this portal.
The portal provides details such as the name, age, gender and district of the person who died due to COVID-19