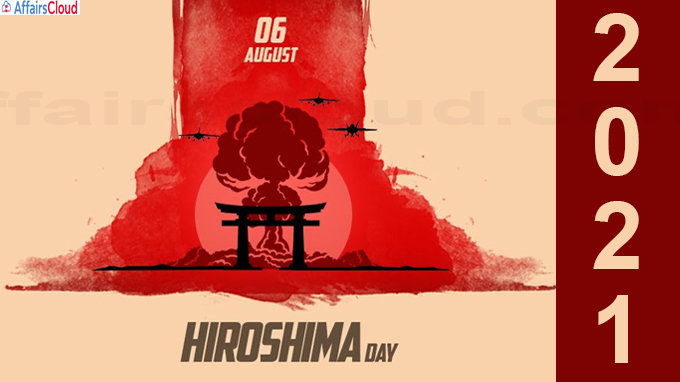 Hiroshima Day is annually observed across the globe on the 6th August to remember the victims of the world’s first atomic bombing on Hiroshima, Japan during World War II(WW2).

The day also aims to create awareness about the adverse effects of Nuclear power and nuclear weapons and to promote world peace.

6th August 2021 marks the observance of the 76th anniversary of Hiroshima Day.

i.On 25th July 1945, the allied forces, Great Britain, the United States, and the Soviet Union, issued the order to attack the Japanese cities, Hiroshima and Nagasaki, with atomic bombs.

Facts on the Bombing of Hiroshima:

i.The ‘Little Boy’ contains enriched uranium and has a blast yield of 13 kilotons of (Trinitrotoluene) TNT.

ii.Colonel Paul Tibbets was the pilot of the B-29 Superfortress bomber named “Enola Gay” which dropped the ‘little boy’ over Hiroshima.

iii.The atomic bomb survivors are referred to as ‘Hibakusha’ in Japanese, which translates to “Bomb affected people”.

i.Hiroshima Peace Memorial, ‘The Genbaku Dome’, was the only structure left standing in the region of the first atomic bomb explosion on 6th August 1945.