We are here for you to provide the important Recent and Latest Current Affairs 6 & 7 June 2021, which have unique updates of Latest Current Affairs 2021 events from all newspapers such as The Hindu, The Economic Times, PIB, Times of India, PTI, Indian Express, Business Standard and all Government official websites. 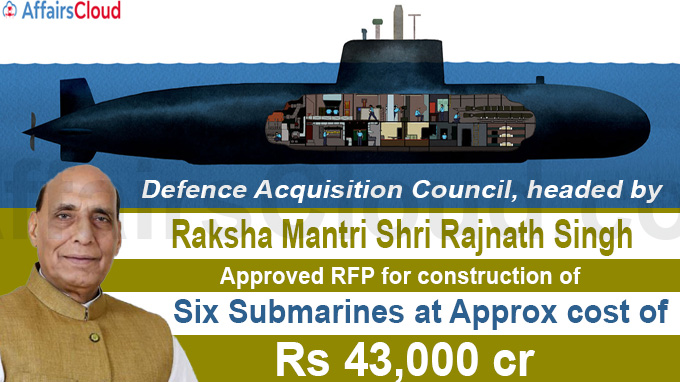 On 4th June 2021, the Defence Acquisition Council (DAC) chaired by Defence Minister Rajnath Singh approves Request For Proposal (RFP) for the construction of 6 Conventional Submarines under Strategic Partnership (SP) Model at a cost of Rs. 43,000 crores and allocated Rs. 6,000 crores for modernisation of Indian Army’s Air Defence Guns and Ammunition.
i.Submarine Construction:
6 Conventional Submarines with state-of-art Air Independent Propulsion System will be indigenously developed under Project P75(I) through SP Model.
Note – INS Kalvari, was the 1st submarine to be inducted in the Indian Navy in 1967. It was built by Soviet Union
ii.Modernising Air Defence Guns:
DAC gave approval for modernising Air Defence Guns and Ammunition of Indian army at a cost of Rs. 6,000 crores under Buy & Make (India) category.
>>Read Full News Energy Efficiency Services Ltd (EESL), a joint venture under the Ministry of Power has signed a Memorandum of Understanding (MoU) with the Indian Society of Heating, Refrigerating and Air Conditioning Engineers (ISHRAE) for a strategic partnership to implement energy-efficient and clean energy solution in the Heating, Ventilation, Air Conditioning, and Refrigeration (HVAC&R) industry. 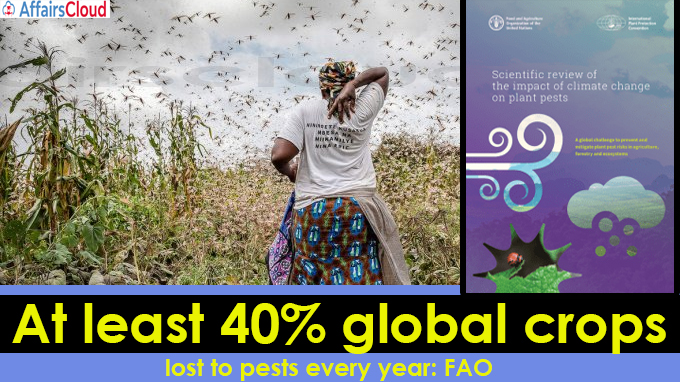 According to the “Scientific review of the impact of climate change on plant pests” report of the Food and Agriculture Organisation (FAO), globally around 40% of agricultural produce is damaged due to invasive pests every year.
i.The report was prepared by Maria Lodovica from the University of Turin in Italy alongside 10 co-authors.
ii.Annually countries spent USD 70 billion to eliminate invasive pests like Fall Armyworm, Desert Locusts (World’s most destructive migratory pests)
About Food and Agriculture Organization (FAO):
FAO was established by the United Nations in October, 1945 to eliminate hunger and improve nutrition and food security.
Director General– Qu Dongyu
Headquarters– Rome, Italy
>>Read Full News

Land Equivalent to Size of China to be Restored by 2030 to Prevent Biodiversity Loss:FAO & UNEP Report 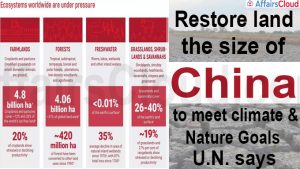 On 3rd June, 2021, Food and Agriculture Organization (FAO) and UN Environment Programme’s (UNEP) has released a report titled, “Becoming #GenerationRestoration Ecosystem Restoration for People, Nature & Climate”. The report states, to avoid biodiversity loss, land equivalent to size of china or one billion hectares of degraded land should be restored by 2030.

Currently, the world is using 1.6 times the amount of services that nature could provide. 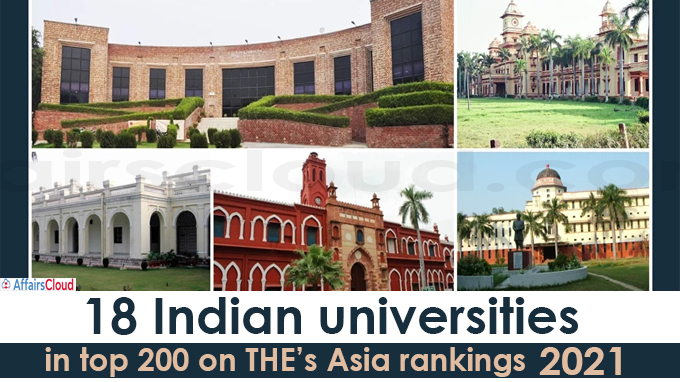 In the 2021 Times Higher Education(THE) Asia university rankings , IISc Bangalore, IIT Ropar and IIT Indore have secured ranks among the top 100 universities in Asia.18 Indian universities have made it to the top 200 Rankings.

The Ranking is based on 13 carefully calibrated performance indicators that measure an institution’s performance across four areas: teaching, research, knowledge transfer and international outlook.

63 Indian universities participated in this year’s rankings, which includes 14 institutions debuting in the table. With this, India is at third place overall in terms of university representation behind Japan (116 universities) and China (91 universities).
Overall, 551 universities appeared in rankings this year from 30 countries in Asia. Securities and Exchange Board of India (SEBI) enhanced the overseas investment limit for a mutual fund(MF) house to USD 1 billion from the existing USD 600 million. The overall MF industry limit for investing overseas remained unchanged at USD 7 billion.

Earlier Enhancements:
In November 2020, SEBI had enhanced the foreign investment limit per MF house from $300 million to $600 million, and for ETFs it was increased from $50 million to $200 million.
About Securities and Exchange Board of India (SEBI):
Establishment – On April 12, 1992, in accordance with the SEBI Act, 1992. (Replaced Controller of Capital Issues (CCI))
Headquarters – Mumbai, Maharashtra
Chairman – Ajay Tyagi
>>Read Full News

Highlights of the Second Bi-Monthly Monetary Policy of FY22 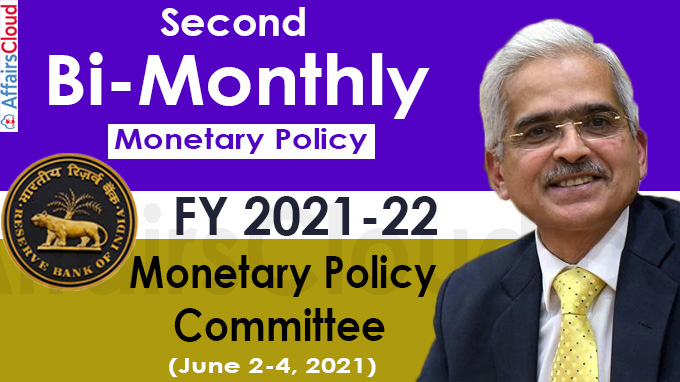 The Reserve Bank of India’s (RBI) 6-members Monetary Policy Committee (MPC) had met on 2nd, 3rd and 4th June 2021 and released its second bi-monthly monetary policy statement for FY22 (April 2021 – March 2022).
Policy Rates:
The Policy rates were kept unchanged, which are as follows: India’s largest private lender, HDFC Bank has planned to become carbon neutral by 2031-32. Bank is now looking to reduce its emissions, energy, and water consumption.The bank is  working on a framework of issuing green bonds.
HDFC has planned to,

HSBC to Exit Retail & Small Business Banking Market in the US

HSBC has announced that it is withdrawing from the retail and small business banking market in the United States (US) as a part of its strategy to refocus on corporate and investment banking in Asia. HSBC is set to sell 90 out of 140 US branches to Citizens Bank and Cathay General Bancorp.
The bank also plans to make around 20 locations as international centres dedicated to high net worth individuals.

Central Bank of India’s (CBI) board has allotted over 280,53,76,972 equity shares at the issue price of Rs 17.11 per share to the government(govt) on preferential basis for Rs 4,800 crore capital infusion in the bank.

About Preferential Shares(PS):
i.PS are one of the special types of share capital having a fixed rate of dividend (Dividend – It is a share of profits and retained earnings that a company pays out to its shareholders).
ii.PS provides the shareholders with the special right to claim dividends during the company lifetime, and also with the option to claim repayment of capital, in case of the winding up of the company.
About Central Bank of India(CBI):
It is the 1st Indian commercial bank which was wholly owned and managed by Indians.
Established– 1911
Headquarters– Mumbai, Maharashtra
MD & CEO –  Matam Venkata Rao
Tagline–  Central to You Since 1911

US Became the 2nd Largest Source of FDI to India in 2020-21;Singapore Tops – DPIIT 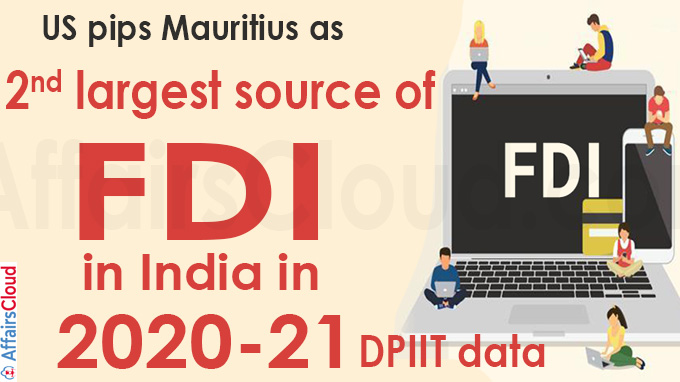 As per the data of the Department for Promotion of Industry and Internal Trade (DPIIT), the United States(US) became the 2nd largest source of foreign direct investment(FDI) into India during FY21 by replacing Mauritius.

FDI’s growth in FY21:
i.In FY21, FDIs into the country grew 19 percent to USD 59.64 billion amidst measures taken by the government for policy reforms, investment facilitation and ease of doing business.
ii.The total FDI (including equity, reinvested earnings, and capital) in FY21 rose by 10 percent to the highest-ever USD 81.72 billion, as against USD 74.39 billion in FY20.
Country-wise Ranking over FDI inflow in FY21: In the 67th edition of Fortune Magazine’s annual ranking of America’s largest companies, Cognizant is ranked at 185th position on the 2021 Fortune 500 list.

About Cognizant:
i.Cognizant is an American multinational technology company that provides IT and consulting expertise in IoT, artificial intelligence, digital engineering, cloud and other key digital technologies.
ii.Cognizant debuted on the Fortune 500 list in 2011 at 484. The company moved into the top 200 in 2018, and advanced nine places on this year’s list.
Headquarters:Teaneck, New Jersey, United States
Chief Executive Officer(CEO):Brian Humphries On June 4,2021,the Reserve Bank of India (RBI) approved the re-appointment of Vishwavir Ahuja as Managing Director(MD) and Chief Executive Director(CEO) of RBLbank for a period of one year with effect from June 30, 2021.

About Vishwavir Ahuja:
i.Vishwavir Ahuja has been the MD & CEO of RBL Bank since June 30, 2010.
ii.He also served as the MD & CEO of Bank of America, India from 2001 to 2009.
Note:
In April, RBI announced capping the tenure of managing directors, chief executives and whole-time directors of private banks at 15 years from the date of appointment. Dr. R S Sodhi, Managing Director, Gujarat Cooperative Milk Marketing Federation Ltd (GCMMF) popularly known as ‘Amul’ was selected to the Board of International Dairy Federation (IDF).The decision has been taken in IDF General meeting on June 1,2021 i.e. World Milk Day.
About International Dairy Federation (IDF) :-
i. IDF is an international authority established in 1903 in the development of science-based standards for dairy sector to provide high quality dairy products.
ii. IDF has an important role to play in ensuring the right policies, standards, practices, and regulations are in place to ensure the world’s dairy products are safe and sustainable.
iii. It has over 1,200 qualified dairy experts in 43 member countries.
iv. IDF members are National Committees generally constituted by dairy organizations in each country.
v. India is represented by the National Committee (INC) of the IDF. The Secretary (ADF), Ministry of Fisheries, Animal Husbandry and Dairying, Government of India is the President of the INC-IDF and National Dairy Development Board (NDDB).

Omnivore, an Agritech venture capital firm, has appointed Harsh Kumar Bhanwala the former chairman of the National Bank for Agriculture and Rural Development (NABARD) as its Senior Advisor. 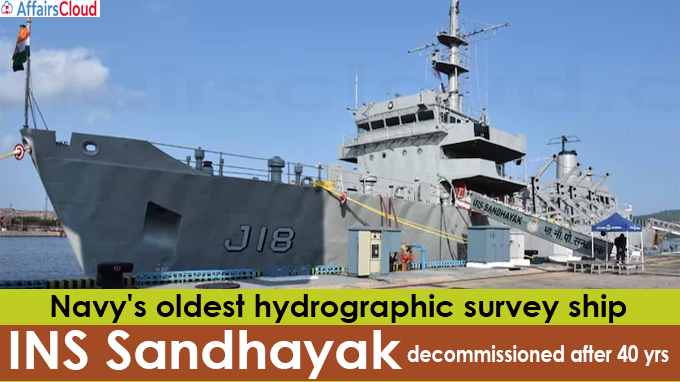 The World Bank Study “Glaciers of the Himalayas : Climate Change, Black Carbon, and Regional Resilience”, informs that the black carbon deposits generated by human activities from inside and outside South Asia have accelerated the glaciers and snow melt in the Himalayan range.
Purpose:
To identify the causes of potential changes to the glacier and snow dynamics in the Himalaya, Karakoram, and Hindu Kush mountain ranges.
About World Bank:
President– David Malpass
Managing Director and  Chief Administrative Officer- Shaolin Yang
Headquarters– Washington, DC, United States
>>Read Full News 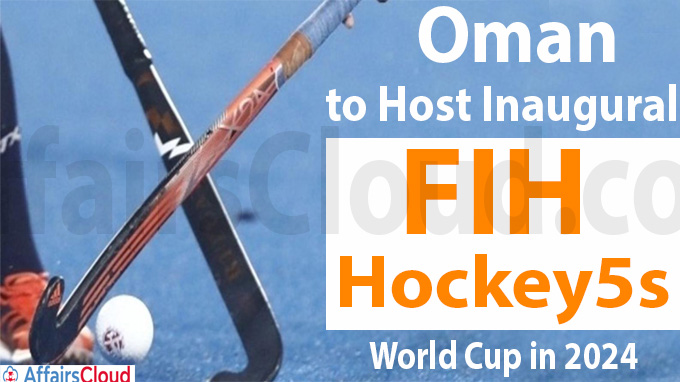 Hockey5s World Cup is a brand-new International Hockey Federation (FIH) competition set to be host by the country Oman in January 2024 and all matches will be held in its capital Muscat. Oman had won the bid against India, Pakistan, and Singapore to host the first edition of the FIH Hockey5s World Cups for men and women.

Hockey5s – It is a short format of the sport which is designed to enhance the global reach of Hockey via a game that is fast, skillful, and adaptable with a set of simplified rules. A maximum of five players such as 4 field players and one goalkeeper from each team must be played on a field at any particular time during the match.

International Day for the Fight against Illegal, Unreported and Unregulated Fishing 2021 – June 5 The World Day Against Speciesism is annually observed across the globe on June 5th to create awareness among people that speciesism has no place in a civilized society. speciesism is like racism or sexism.
The World Day Against Speciesism is observed by the People for the Ethical Treatment of Animals (PETA), Farm Animal Rights Movement (FARM), and other animal rights groups across the globe.
Speciesism:
Speciesism refers to the assignment of different inherent moral status based solely on an individual’s species membership. United Nations(UN)’s World Environment Day is annually observed across the globe on 5th June to promote and encourage the involvement of the government, businesses, celebrities and citizens to focus on environmental issues.
Theme: