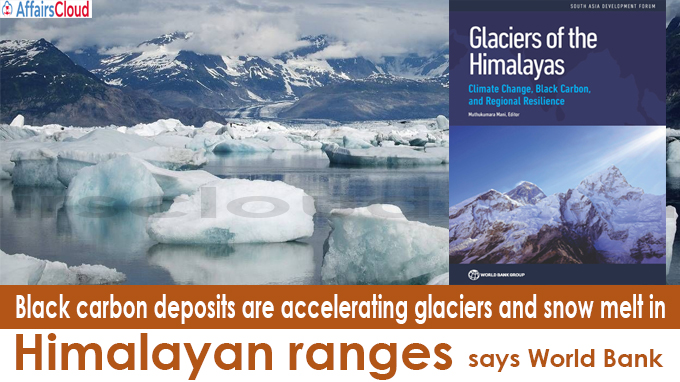 The World Bank Study “Glaciers of the Himalayas : Climate Change, Black Carbon, and Regional Resilience”, informs that the black carbon deposits generated by human activities from inside and outside South Asia have accelerated the glaciers and snow melt in the Himalayan range.

To identify the causes of potential changes to the glacier and snow dynamics in the Himalaya, Karakoram, and Hindu Kush mountain ranges.

By 2050, from 1.5 billion to 1.7 billion people in South Asia are projected to be vulnerable to water scarcity.

Key Points of the Study:

i.The evidence in the study suggests that in addition to the change in temperatures and precipitation patterns, anthropogenic black carbon(BC) deposits are accelerating the glacier and snow melt in the Himalayas, Karakoram, and Hindu Kush mountain ranges.

ii.This also examines the extent of water resources and the impacts of the loss of glaciation on downstream river basins.

iii.The study presents the scenarios through to 2040, to align with a reasonable policy-making time horizon.

iv.Addressing the challenges related to the melting glaciers is a transboundary task beyond the scope of a single country policymaker.

i.The glaciers of the Himalayas provide water to around 750 million people living in this region.

ii.The changes in the glaciers and snow due to climate change and black carbon, determining the implications of water resources in Indus, Ganges, and Brahmaputra basins.

Black carbon is a kind of an aerosol. An aerosol is a suspension of fine solid particles or liquid droplets in the air. Among aerosols (such as brown carbon, sulphates), Black Carbon (BC) has been recognized as the second most important anthropogenic agent for climate change and the primary marker to understand the adverse effects caused by air pollution.

According to the report of Bank of America(BofA), India needs 401 Billion USD Capital investments as a part of its measures to control pollution under the 2015 Paris Climate Agreement, to save 106 GW of energy and 1.1 billion tonne greenhouse gases between 2015 and 2030.