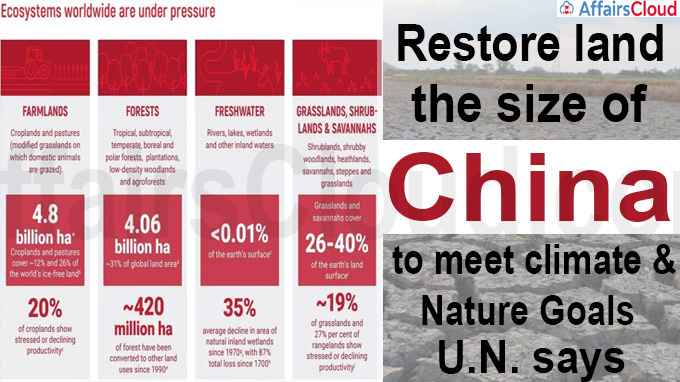 On 3rd June, 2021, Food and Agriculture Organization (FAO) and UN Environment Programme’s (UNEP) has released a report titled, ‘Becoming #GenerationRestoration: Ecosystem Restoration for People, Nature and Climate’. The report states, to avoid biodiversity loss, land equivalent to size of china or one billion hectares of degraded land should be restored by 2030.

Currently, the world is using 1.6 times the amount of services that nature could provide.

Forests – ~420 million ha of forest have been converted to other land uses since 1990.

Grasslands, Shrublands & Savannahs- ~19% of grasslands and 27% per cent of rangelands show stressed or declining productivity.

Urban Area – >50% Since 2000, the number of city inhabitants without access to safely managed drinking water has increased by more than 50 per cent.

To achieve land restoration targets by 2030, investment of at least $200 billion per year by 2030 will be needed.