We are here for you to provide the important Recent and Latest Current Affairs 5 February 2021, which have unique updates of Latest Current Affairs 2021 events from all newspapers such as The Hindu, The Economic Times, PIB, Times of India, PTI, Indian Express, Business Standard and all Government official websites. 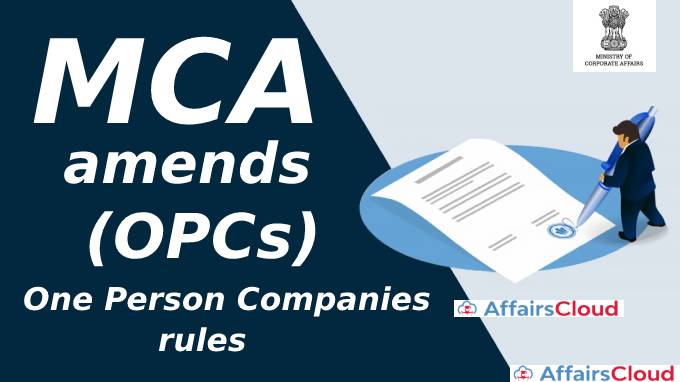 Ministry of Corporate Affairs (MCA) has amended the ‘Companies (Incorporation) Rules, 2014’ to make changes in the definition of One Person Companies (OPCs) Rules

Change in Threshold of Paid-up capitals & Turnover:
MCA has also revised the limit of  paid-up capital & Turnover  of small companies under Companies Act , 2013 Based on  the recommendations of the Company Law Committee (CLC) headed by Corporate Affairs Secretary, Rajesh verma, the Ministry of Corporate Affairs (MCA)   has started the process of Decriminalization of Compound Offences under the Limited Liability Partnership (LLP) Act, 2008.

i.Objectives behind Decriminalization of Compoundable Offences: 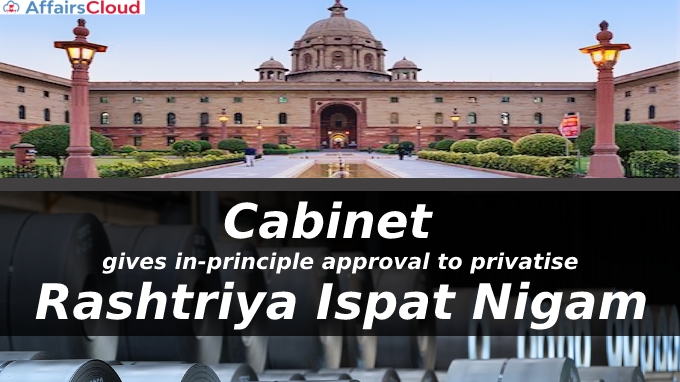 i.The Cabinet Committee on Economic Affairs (CCEA) gave in-principle approval for 100% strategic divestment of Indian Government’s shareholding in Rashtriya Ispat Nigam Limited (RINL).
ii.In addition to this it also gave approval for management control of RINL by way of privatization.
Reason of Privatization: RINL has been incurring losses for a few years.
Background:
The Government in the budget 2021-2022 stated that it has set a target of Rs 1.75 lakh crore from stake sale in public sector companies and financial institutions,  including 2 Public Sector Banks and one General Insurance company. The disinvestment will begin from April 1 of FY 2021-2022.
About Rashtriya Ispat Nigam Limited(RINL):
i.It is a corporate entity of Visakhapatnam Steel Plant(Vizag Steel) and is a Navaratna PSE under the Ministry of Steel.
ii.It is the 1st shore based integrated steel plant in India.
Chairman-cum-Managing Director– Pradosh Kumar Rath
Headquarters– Visakhapatnam, Andhra Pradesh
<<Read Full News>> On 3rd February 2021, the Automotive Research Association of India (ARAI) signed a statement of intent (SOI) with Atal Innovation Mission (AIM) the flagship initiative of Niti Aayog to boost the start-up ecosystem in the mobility sector.
The objective of the partnership includes, to create mobility, electric mobility, transportation, sustainable development goats and digital infrastructure in cities and villages across India.
ARAI and AIM will collaborate under the Atal New India Challenge(ANIC) for the development of the technologies which were identified as the challenges or problem statements by the Ministry of Road Transport and Highways.
About Automotive Research Association of India (ARAI):
Automotive Research Association of India (ARAI) is an autonomous body under the Ministry of Heavy Industries and Public Enterprises, Government of India.
Director– Reji Mathai
Headquarters- Pune, Maharashtra
About Atal Innovation Mission (AIM):
Director– Ramanan Ramanathan
Headquarters– New Delhi
<<Read Full News>> 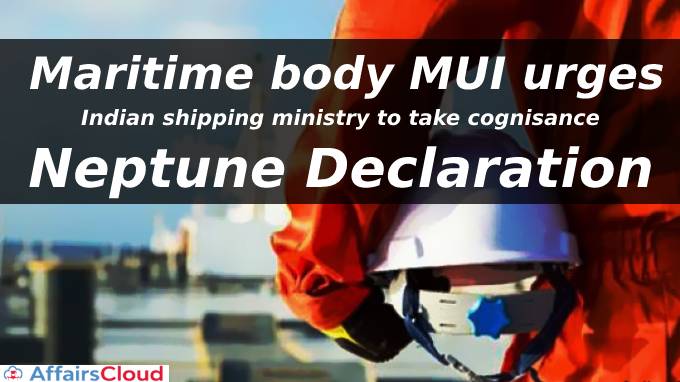 Maritime Union of India (MUI) urged the Ministry of Ports, Shipping and Waterways of India to take note of “Neptune Declaration on Seafarer Wellbeing and Crew Change” while preparing the ‘Maritime India Vision 2030’.
i.The Neptune declaration initiated by Global Maritime Forum focuses on Recognition of seafarers as key workers by Governments of all countries in line with UN General Assembly resolution adopted on December 1, 2020. 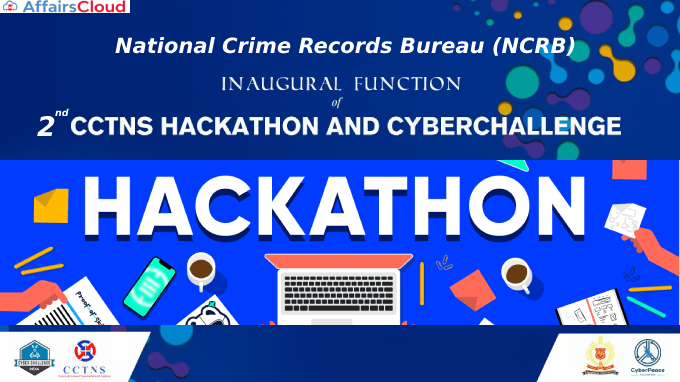 On 3rd February 2021, the Ministry of Commerce and Industry has organised Udyog Manthan under which a series of webinars were conducted on 45 sectors which includes pharma and electronics.  Udyog Manthan focuses on quality and productivity in all the major sectors of manufacturing services. Udyog Manthan started on 4th January 2021 and concluded on 2nd March 2021.
Features of Udyog Manthan: 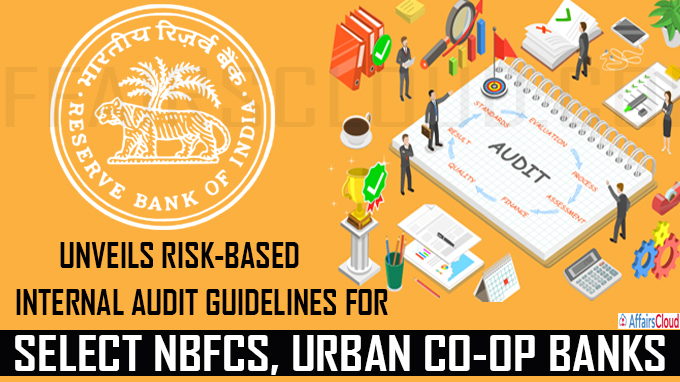 i.On February 3, 2021 Insurance Regulatory and Development Authority of India (IRDAI) issued guidelines on Standard Vector Borne Disease Health Policy to encourage all general and health insurers to offer this product. They will offer this product by 1st April, 2021.
ii.The product will offer a policy tenure of a year (12 Months).
iii.The nomenclature of the product should be in the name of the insurance company followed by “Mashak Rakshak”
Purpose– To make available Vector Borne Disease specific health insurance product for the public
About Insurance Regulatory and Development Authority of India (IRDAI):
Chairman – Subhash Chandra(C.) Khuntia
Headquarters – Hyderabad, Telangana
<<Read Full News>> On 30th January 2021, Jay Shah, secretary of Board of Control for Cricket in India(BCCI) was elected  as new President of Asian Cricket Council (ACC) at the Annual General Meeting of ACC which was held virtually due to the COVID-19 pandemic.

2020 Asia Cup:
i.The 2020 Asia Cup was postponed to June 2021 due to the COVID-19 pandemic.
ii.The tournament which was planned to be organised in Pakistan will be held in Sri Lanka or Bangladesh.
About Asian Cricket Council (ACC):
i.ACC was formed on 19th September 1983 as The Asian Cricket Conference in New Delhi.
ii.Founding members of ACC were Bangladesh, India, Malaysia, Pakistan, Singapore and Sri Lanka.
Members- 25 Associations.
About Board of Control for Cricket in India(BCCI) :
President- Sourav Ganguly
Headquarters- Wankhede Stadium, Mumbai, Maharashtra. 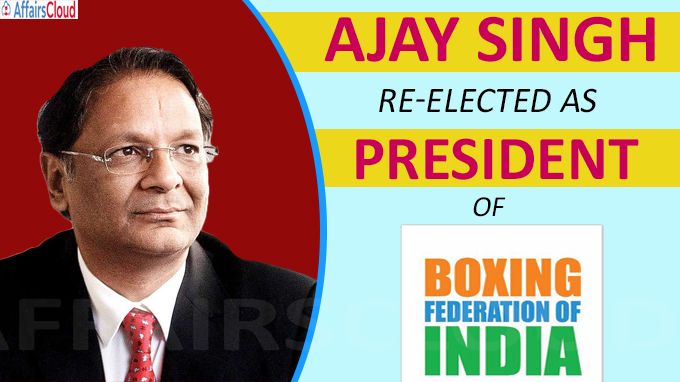 Ajay Singh has been re-elected as the president of Boxing Federation of India(BFI) for the second term after securing 37 votes in the general elections held on February 3, 2021 at Gurugram(Gurgaon), Haryana. Hemanta Kumar Kalita was elected as the secretary and Digvijay Singh as treasurer.

Elections
The election was held in the presence of International Boxing Association (AIBA) observer Yury Zaystsev, Indian Olympic Association(IOA) observer Rakesh Gupta along with an observer from the sports ministry.
About Boxing Federation of India(BFI)
Headquarters– Gurugram(Gurgaon), Haryana 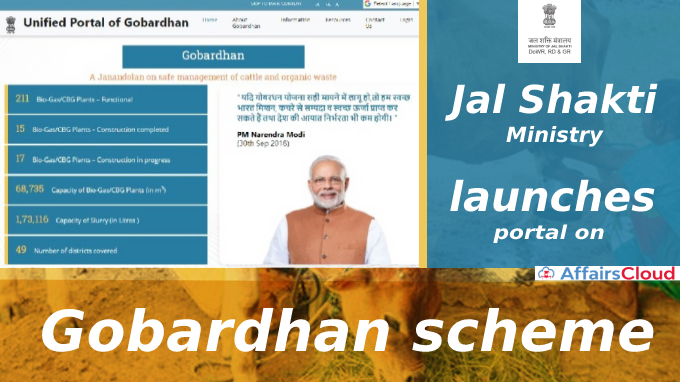 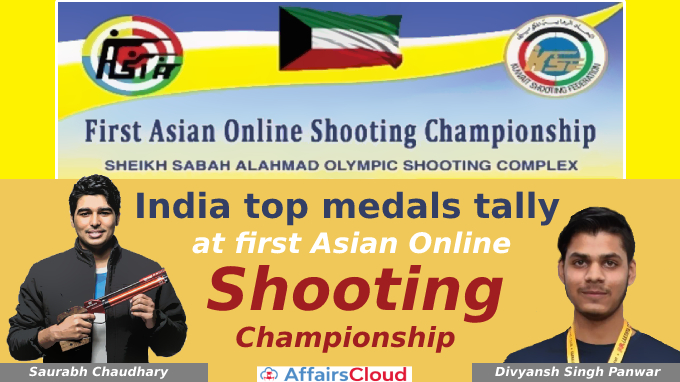 i.World Cancer Day is annually observed across the globe on 4th February to create awareness and educate the general public about the stigma around cancer and  to reduce the preventable deaths.
ii.The World Cancer Day is a global uniting initiative led by the Union of International Cancer Control (UICC).
iii.The theme of the World Cancer Day for 2019 to 2021 is “I Am and I Will”.
iv.The theme of World Cancer Day 2021 is “I Am and I Will: “Together, all our actions matter”.
v.The World Cancer Day was established during the World Cancer Summit Against Cancer for the New Millennium held in Paris, France on 4th February 2000.
iv.The day also marks the signing of the Charter of Paris Against Cancer by Kōichirō Matsuura, General Director of UNESCO and Jacques Chirac, the French President.
About Union of International Cancer Control (UICC):
CEO-  Cary Adams
Headquarters– Geneva, Switzerland
<<Read Full News>> 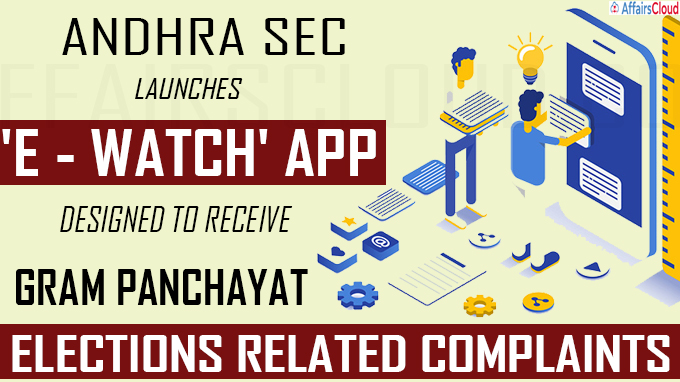 Andhra Pradesh State Election Commissioner(AP SEC) N. Ramesh Kumar launched the ‘e-Watch’ app to receive complaints related to poll related irregularities. This launch comes ahead to the Gram Panchayat Elections of Andhra Pradesh state, that is planned to be held on February 21, 2021.

i.Poll related irregularities such as booth capturing can be informed by citizens through this app. The app is designed Fool proof with 100% transparency & User friendly.
ii.High secrecy will be maintained on the details of the complainant.
iii.A Call center was also set up in the state to address the Gram Panchayat polls related complaints.
About Andhra Pradesh:
Ugadi, the state festival of Andhra Pradesh, is called as the Telugu New Year.
Nicknames-
Vishakhapatnam – City of Destiny
Piduguralla – Lime City of India i.On 4th February 2021, Arvind Kejriwal, the Chief Minister of Delhi, launched “Switch Delhi” a campaign to promote the use of Electric Vehicles and to encourage people to buy electric vehicles to reduce the pollution in Delhi.
ii.The government of Delhi has set a target of 25% of electric vehicles in the total registration in Delhi by 2024.
iii.As a part of this campaign he announced that the government of Delhi will hire only electric vehicles for other purposes in the next 6 weeks.
About Delhi:
UNESCO Sites– Humayun’s Tomb, Qutb Minar and its Monuments, Red Fort Complex
Zoological park– National Zoological Park
<<Read Full News>>