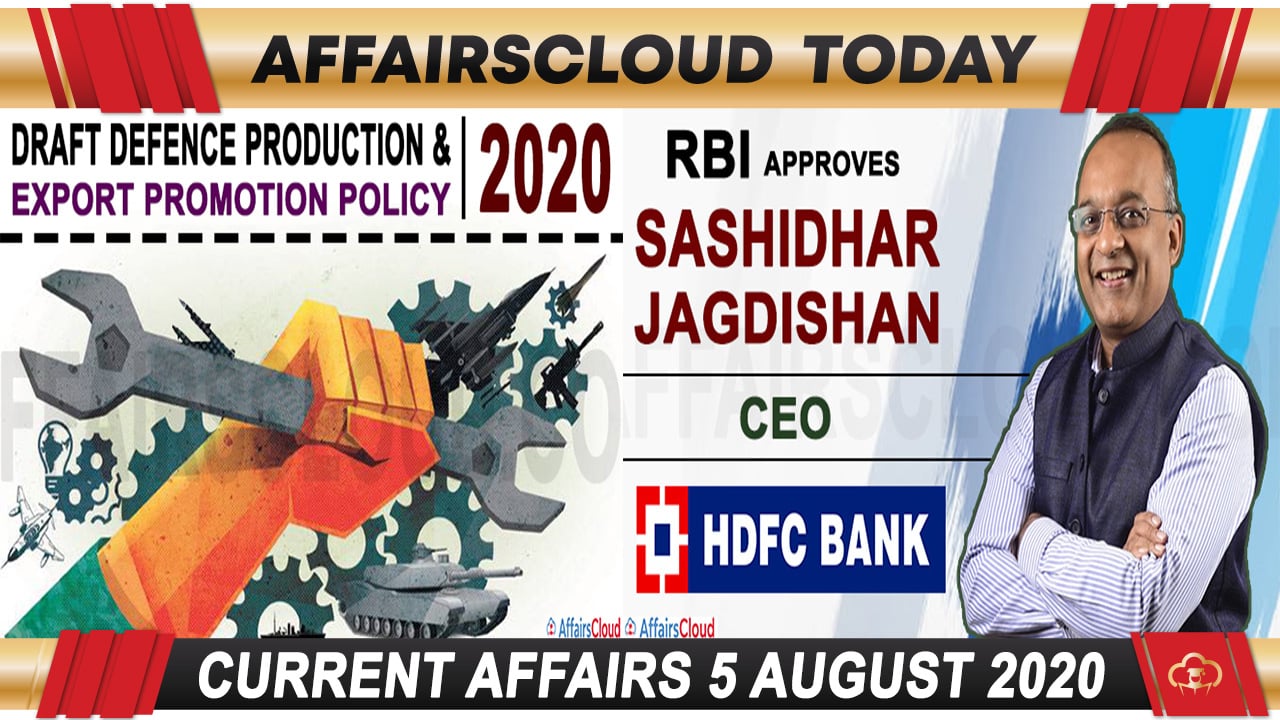 We are here for you to provide the important Recent and Latest Current Affairs 5 August 2020, which have unique updates of Latest Current Affairs 2020 events from all newspapers such as The Hindu, The Economic Times, PIB, Times of India, PTI, Indian Express, Business Standard and all Government official websites. 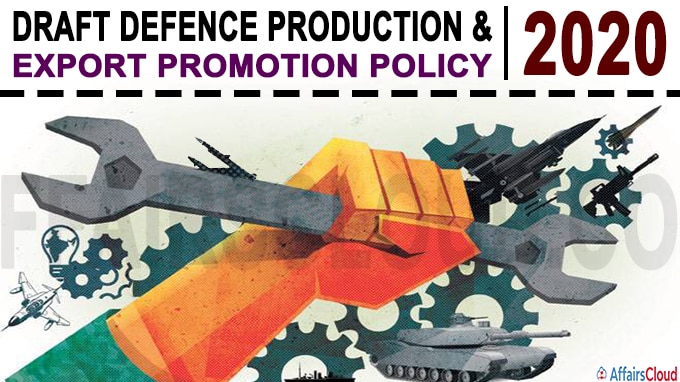 i.On August 3, 2020, the Ministry of Defence (MoD) publicized a draft ‘Defence Production & Export Promotion Policy (DPEPP) 2020 for public feedback by August 17, 2020 after which the policy would be promulgated by the MoD. The policy aims to achieve a manufacturing turnover of $25 bn or Rs 1,75,000 crore, including exports of $5 bn or Rs 35,000 Crore in aerospace and defence goods and services by 2025.
ii.The DPEPP 2020 is MoD’s overarching guiding document for providing significant thrust to defence production capabilities for self-reliance and exports.
iii.The Department of Defence Production (DDP) will be the nodal department for coordination on various components of the DPEPP 2020 and to achieve the objectives set in this Policy.
About Ministry of Defence (MoD):
Union Minister– Rajnath Singh
Minister of State (MoS)– Shripad Yesso Naik
<< Read Full News >> i.In order to provide more time to the listed entities to meet criteria of minimum public shareholding (MPS) of 25%, the Centre Government has made changes in the Securities Contracts (Regulation) Rules, 1957 in rule 19A, in sub-rule (1), where the words “two years” substituted by words “three years”.
ii.Eligibility for this relaxation: The rules were relaxed for listed entities for whom the deadline to comply with MPS requirements falls between the period from March 1, 2020 to August 31, 2020.
iii.Stock exchanges will not take any penal action against entities in case of non-compliance during the above mentioned period.
About Securities and Exchange Board of India (SEBI):
Chairman– Ajay Tyagi
Headquarter– Mumbai, Maharashtra
<< Read Full News >> 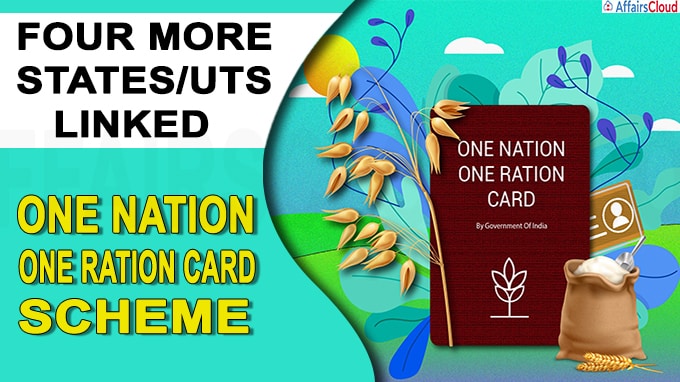 Key Features of NTC Machine:
-The NTC machine has the capability to lay 1.5 km of track per day as compared to 150-200 metres of track.
-The machine helps in bringing efficiency in track construction with integrated logistic arrangements for mechanised handling, movement and laying of heavy track components.
Recent Related News:
In accordance with the initial timeline drawn by the railways, it has planned to roll out 151 private train services by 2027 on 109 pairs of routes across the country. In this regard, Indian Railways is ready to introduce 12 trains in 2022-23, 45 in 2023-2024, 50 in 2025-26 and 44 more in the next fiscal, taking the total number of trains to 151 by the end of FY 2026-2027. There would be Rs 30,000 crore private sector investment in this project.
About Indian Railways:
Headquarter– New Delhi
Operated by – Ministry of Railways
Railway Board Chairman– Vinod Kumar Yadav 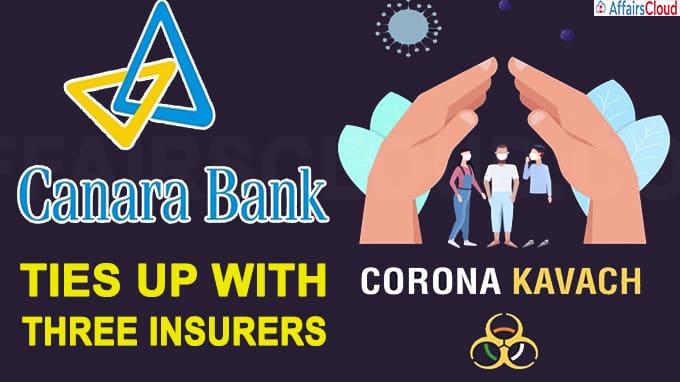 National Bank of Bahrain(NBB) and Infosys Finacle, part of EdgeVerve Systems, a wholly-owned subsidiary of Infosys, announced that the bank has decided to adopt the Finacle Cash Management Suite to digitally transform its transaction banking business. The Karmaveer Chakra Award instituted by the United Nations(UN) and International Confederation of NGO (iCONGO) was awarded to 23 years old Sunil Ydv SS, the founder and CEO of SS motivation channel on Telegram for his contribution to the society through “SS Motivation”, at the ReX ConcLIVE hosted at Indian Institute of Technology- Delhi(IIT-D).
Sunil Ydv SS:
i.Through the SS Motivation channel Sunil addressed various social issues and motivated numerous people.
ii.His channel achieved around 127 million views in 2019, the highest global record obtained by a telegram channel that provides solutions to social issues.
iii.He was enlisted in the Bravo International Book of World Records for having the most number of subscribers on his telegram channel.
Awards:
i.He received Rastra Prerna, Iconic Personality of India, Incredible Indian Icon and Humanitarian Excellence in 2019.
ii.He also received the India Book of Records award for the “Most Popular Motivational Channel.”
Book:
He authored the book “The Secrets Behind Success”, which emphasized the success mantra of a 23-year-old boy from a small Indian town.
Karmaveer Chakra Award:
i.Karmaveer Chakra is presented as a tribute to Dr.APJ Abdul Kalam, the 11th President of India and recognises nobel laureates.
ii.Karmaveer Chakra award is a global civilian honour presented to recognise the contribution of individuals who showcase their restless courage, initiating change and exploring the less travelled life paths. 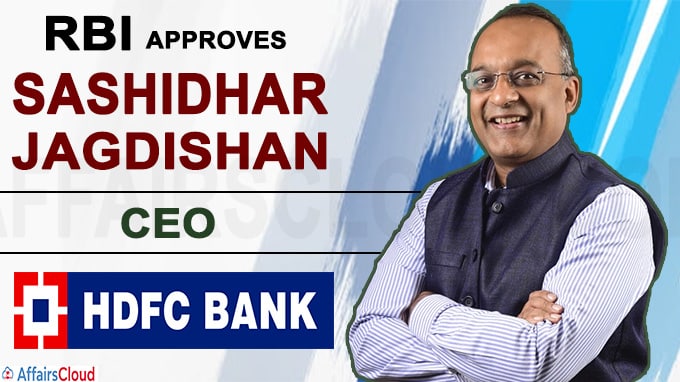 i.The Reserve Bank of India(RBI) has approved Sashidhar Jagdishan as the next Managing Director(MD) and Chief Executive Officer(CEO) of HDFC Bank for a period of 3 years, effective from October 27, 2020 under Section 35B of the Banking Regulation Act 1949.
ii.He will succeed Aditya Puri, the bank’s longest serving CEO(26 years- since September 1994).
iii.Aditya Puri will retire on October 26, 2020, on attaining the age of 70.
About HDFC Bank:
Headquarters– Mumbai, Maharashtra
Chairman– Deepak S. Parekh
Tagline– We understand your world
<< Read Full News >> i.Healthcare Technology Innovation Centre(HTIC) of Indian Institute of Technology Madras (IIT Madras) in partnership with Helyxon Healthcare Solutions Private Limited, a healthcare startup in IIT Madras jointly developed a first of its kind remote patient monitoring device for COVID-19.
ii.The device was engineered based on the clinical input to provide a low cost, simple and easy to use device to monitor the patients from anywhere at the hospital or home.
About IIT Madras:
Director– Bhaskar Ramamurthi
Inaugurated– 1959
<< Read Full News >>

On July 31, 2020 the Mumbai Division of Central Railway (CR), designed a health assistant robot “Rakshak” that communicates between doctor and patient remotely.
The Robot was developed in-house at EMU (Electric Multiple Unit) car shed by Sunil Bairwa, Senior Divisional Electrical Engineer and his team in Kurla, Mumbai section of the Central Railway.The robot was handed over to Dr Babasaheb Ambedkar Memorial Hospital.
The main objective of building the robot is to avoid spreading of the COVID-19 virus among people.
The Divisional Railway Manager (DRM) Shalab Goel, CR Mumbai Division, handed over this robot to Dr Meera Arora, Chief Medical Director of the hospital at Byculla at Chhatrapati Shivaji Maharaj Terminus.
Features of the “Rakshak”
i.The Robot can measure health parameters like temperature, pulse, oxygen percentage and dispenser sanitizer automatic, infrared sensors.
ii.It can also deliver medicines and food and can make 2-way video communication between the doctors and the patients.
iii.The Robot can work upto 6 hours and can carry upto 10 Kilogram (Kg) of weight in its tray.
iv.It can move in all directions at all levels and has a remote range upto 150 meters and operates on Wi-Fi and with Android mobile applications.
About Central Railway (CR)
Headquarters – Chhatrapati Shivaji Maharaj Terminus, Mumbai, Maharashtra
Divisions– Mumbai, Bhusaval, Pune, Solapur, and Nagpur

On August 3, 2020 a unique kiosk named “UV Baggage Bath” was inaugurated at the Bangalore railway station, South Western Railway, by the Senior Divisional Commercial Manager, Bengaluru Division, AN Krishna Reddy and Additional Divisional Railway Manager (Admin), Bengaluru Division, Kalyani Sethuraman.
Objective of the kiosk :- To disinfect the baggage to stop the indirect mode of COVID – 19 transmissions from the outer surfaces of travel bags to the human beings.
The proposal was implemented at KSR (Krantivira Sangolli Rayanna) Bengaluru and Yesvantpur Railway stations by M/s Optimurz Bio and IT Solutions.
About UV Baggage Bath
i.It is an enclosed chamber through which passenger luggage will be passed. The beamed Ultra Violet (UV) light from all directions disinfects the contaminations like virus, bacteria and other germs and pathogens on the outer surface of the baggage.
ii.It has been set up at the second entry (near entrance of Platform Number: 5, 6,7 & 8) of the station to sanitize the luggage of the on-board and off-board passengers.
iii.The sanitized luggage will be handed back to the passenger with a sticker certifying the sanitized luggage.
iv.The optional luggage disinfection process would be available free to the passengers for one month. After a month nominal charges will be collected based on the cost of operation and patronage.
About South Western Railway
Headquarters: Rail Soudha, Gadag Road Hubli Karnataka
Divisions: Hubli, Mysore and Bangalore 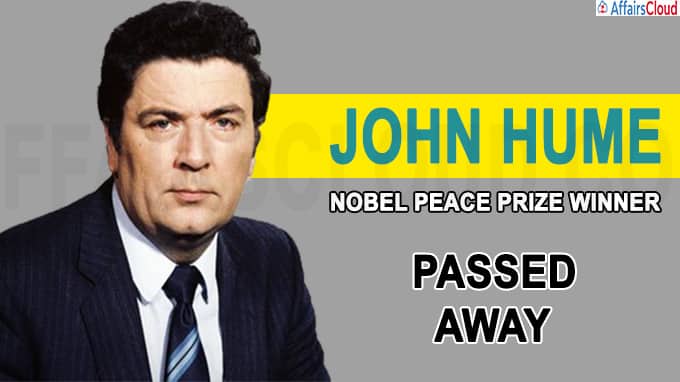 The Nobel Peace Prize winner(1998) and prominent Northern Ireland politician John Hume passed away at 83 in a Londonderry nursing home due to a long period of illness on August 3, 2020.He was born on January 8, 1937 in Derry(Londonderry), Northern Ireland(a part of the United Kingdom- UK).He is the only person to receive the three major peace awards(Gandhi Peace Prize, Nobel Peace Prize & Martin Luther King Award).
Key Info about John Hume
i.John Hume was the founding member of the Social Democratic and Labour Party (SDLP) in 1970 and led the party from 1979 until 2001.
ii.He shared the Nobel Peace Prize with David Trimble of the Ulster Unionist Party(UUP) for their efforts to find a peaceful solution to the conflict in Northern Ireland.
iii.They played a major role to create the Good Friday Agreement in 1998, which ended the violent conflict in Northern Ireland by bringing unionists and Irish republicans into a power-sharing government.
Few Honors- International Gandhi Peace Prize, 2001; Golden Doves for Peace Journalistic Prize, 1997; Martin Luther King Peace Award, 1999. On July 31, 2020 Former Arunachal Pradesh Governor and Veteran Bureaucrat Ramachandra Dattatraya Pradhan (R.D.Pradhan) passed away at the age of 92 in Mumbai. He was born on 27th June, 1928.
He joined as IAS officer in the erstwhile Bombay State in 1952. He has served positions in Gujarat, Maharashtra also. He has held the position of Home Secretary & Chief Secretary of Maharashtra.
Positions held: 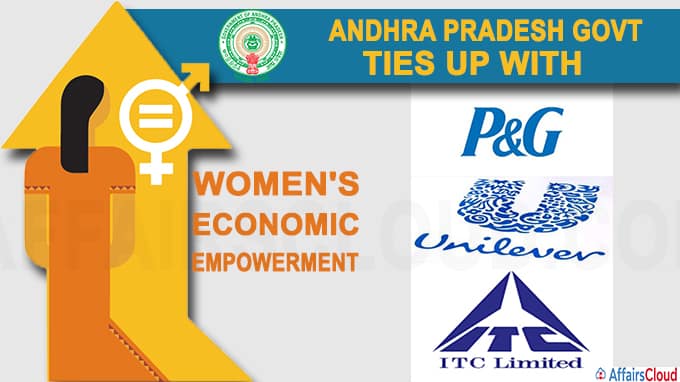 The Education department of Daman Administration launched the E-Gyan Mitra mobile application developed by the administration of Dadra and Nagar Haveli and Daman and Diu (DNHDD) to support students for their online education of the Union Territory of DNH and DD .
E-Gyan Mitra:
i.The application provides a platform for online classes, where the teachers can post the videos of lectures and conduct tests for the students from primary to higher secondary classes.
ii.Using the mobile application the teachers can monitor the progress of the students who are at home amid COVID-19 pandemic.
iii.The application supports multiple languages – English, Hindi, Gujarati and Marathi.
About Dadra & Nagar Haveli and Daman & Diu(DNHDD):
Administrator– Praful Patel
Capital– Daman

Union Home Minister Amit Shah  has inaugurated a two-day international webinar on the theme of ‘Lokmanya Tilak – Swaraj to Self-reliant India’ in New Delhi,which was organized by the Indian Council for Cultural Relations(ICCR) on the 100th death anniversary of the great freedom fighter Lokmanya Bal Gangadhar Tilak(August 1, 2020).