We are here for you to provide the important Recent and Latest Current Affairs 3 April 2021, which have unique updates of Latest Current Affairs 2021 events from all newspapers such as The Hindu, The Economic Times, PIB, Times of India, PTI, Indian Express, Business Standard and all Government official websites. The Ministry of Finance has extended the validity of Emergency Credit Line Guarantee Scheme (ECLGS) by another 3 months till June 30, 2021 or till such time that an amount of INR 3 Lakh crore (Target Credit Line) is sanctioned under the Scheme. Additionally, the scope of ECLGS has been widened through introduction of ECLGS 3.0. India and the United States (US) have agreed to revise the India-US Strategic Energy Partnership (SEP). The revised SEP will have a greater focus on promoting clean energy with low-carbon pathways & accelerating green energy cooperation. i.The Scheme will have 2 major components – 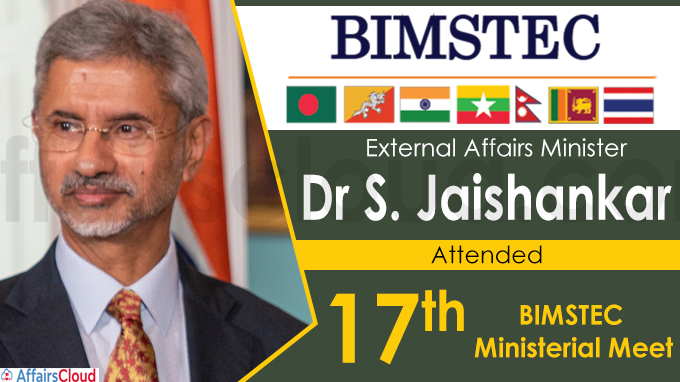 On 1st April 2021 External Affairs Minister(EAM), S. Jaishankar virtually addressed the 17th BIMSTEC (The Bay of Bengal Initiative for Multi-Sectoral Technical and Economic Cooperation) Ministerial Meeting held Virtually from Colombo, Sri Lanka. The Meeting was chaired by Sri Lanka virtually. He highlighted the strategic importance of the master connectivity plan among the South and Southeast Asian countries.
BIMSTEC is group of 7 Asian countries,

ULPIN: Unique 14-digit ID for all Land Records by March 2022

Parliamentary Standing Committee on Rural Development announced, The Unique Land Parcel Identification Number (ULPIN), 14-digit unique identification number to every plot of land in India. Currently, the ULPIN scheme has been launched in 10 States and will be extended all over the country by March 2022.
i.All land will be identified based on longitude & latitude coordinates, solving issues related to outdated & disputed lands.
ii.ULPIN is a part of India’s Digital India Land Records Modernisation Programme (DILRMP).
Other Proposals:

Starting from April 1, 2021, the Finance Ministry has made it mandatory for Businesses with turnover of more than INR 5 Crore to furnish 6-Digit HSN/SAC (Harmonised System of Nomenclature Code/Service Accounting Code) on invoices issued for supplies of taxable goods and services.

i.Businesses with Turnover of up to INR 5 Crore in the Financial Year 2020-21 would be required to furnish 4-digit HSN code on B2B invoices.
ii.In India, HSN is already in use According to the report ‘Prime-Time for Real Time’-2021 launched by ACI Worldwide and GlobalData, India with 25.5 Billion transactions topped the list of countries with most number of real-time transactions in Digital Payments in 2020. It was followed by China (15.7 Billion) & South Korea (6.0 Billion). On April 1,2021, Government of India has decided to continue the existing inflation-targeting framework which fixed the inflation target (price stability) of 4% with a +/- 2% tolerance band (in the range of 2% – 6%) for the next 5 fiscal years i.e. FY22 to FY26. 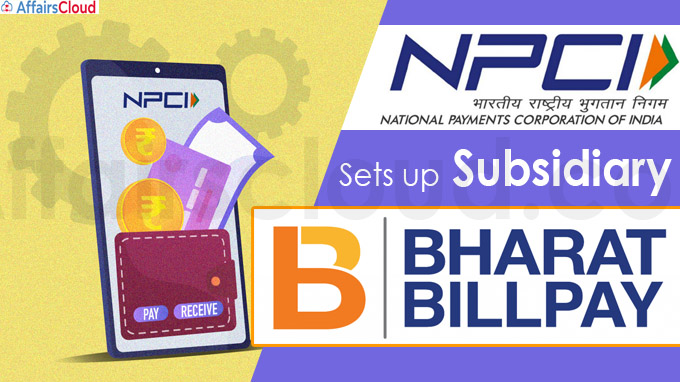 CDC tied up with Northern Arc for PBI to support MFIs Rajinikanth to be Honoured with 51st Dadasaheb Phalke Award 2019 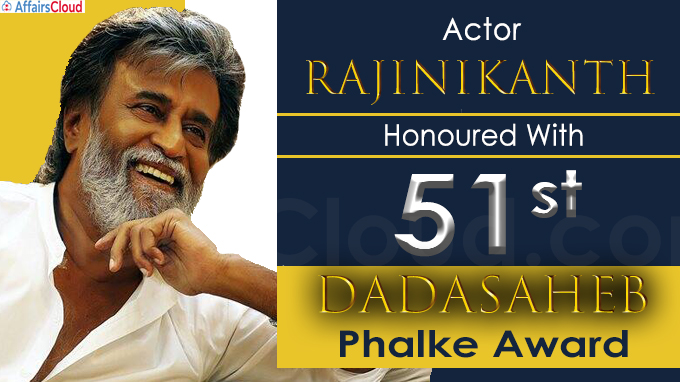 American Author Carmen Maria Machado won the Rathbones Folio Literary Prize for the year 2021 for memoir ‘In the Dream House’ (released in 2019).   It is the only Literary prize which is open to all genres – Fiction, non-fiction, and poetry for writers around the world. Captain of the Indian Men’s cricket team, Virat Kohli became the brand ambassador of Digit Insurance, a general insurance company, which became the first unicorn of 2021 with a valuation of 1.9 Billion USD (around Rs. 13918 crores).

Mallika Srinivasan CMD of TAFE, 1st Private Sector Specialist to be Appointed as Chairperson of PESB 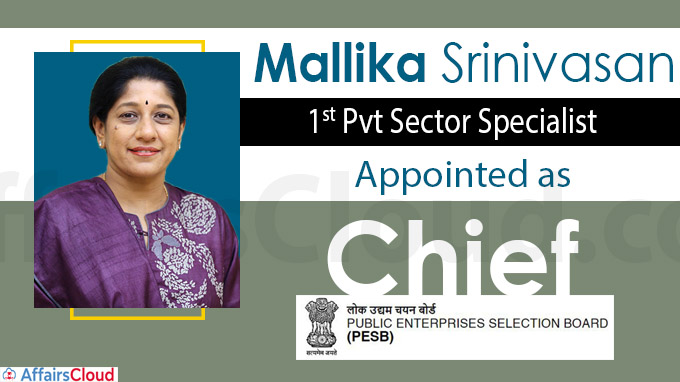 i.On 1st April 2021, the Appointment Committee of the Cabinet(ACC) approved the appointment of Padma Shri Mallika Srinivasan, Chairman and Managing Director(CMD) of Tractors and Farm Equipment (TAFE), India’s 2nd and World’s 3rd largest tractor manufacturer, as the Chairperson of the Public Enterprises Selection Board(PESB), which is responsible for the appointment of top management posts in Central Public Sector Enterprises(CPSEs).
ii.This is the first time where a private sector specialist was appointed as the head of PESB.
iii.Sailesh, a 1985 batch IAS officer was appointed as the member of PESB for a period of 3 years or until attaining the age of 65 years. Details of existing rules & regulation and reasons for review Mukhmeet S Bhatia Takes Over as the DG of ESIC 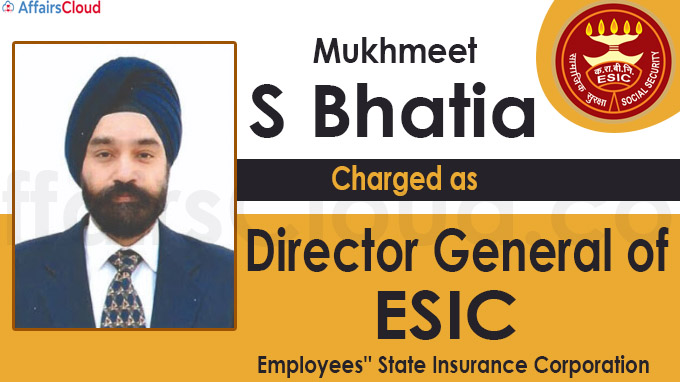 On 1st April 2021, Mukhmeet S Bhatia assumed the charge as the Director General(DG) of Employees’ State Insurance Corporation (ESIC), under the Ministry of Labour and Employment, Government of India.

Urjit Patel, former Reserve Bank Governor has been appointed as the Britannia Industry’s Additional Director in the category of Non-Executive and Independent Director with effect from 31st March 2021 for a term of 5 years i.e up to 30th March 2026.

Kamalesh Chandra Chakrabarty (KC Chakrabarty), the former Deputy Governor of Reserve Bank of India(RBI) passed away at the age of 68 in his residence in Mumbai, Maharashtra. 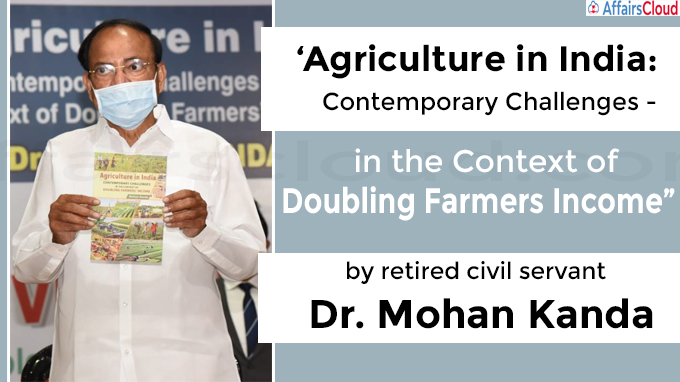 On 31st March 2021, M. Venkaiah Naidu, Vice President of India released the book titled “Agriculture in India: Contemporary Challenges – in the Context of Doubling Farmers Income” authored by Dr. Mohan Kanda, former Chief Secretary(CS) of Andhra Pradesh(AP).
The book is published by BSP Books Private Limited.
Doubling Farmers Income(DFI):
i.The Government of India targets to double the income of farmers by 2022.
ii.The Inter-Ministerial Committee constituted in 2016 to examine the issues on Doubling of Farmers Income (DFI) recommended the DFI strategy to double the farmers’ income, they are,

About Dr. Mohan Kanda
i.Dr. Mohan Kanda, a 1968 Batch IAS Officer of AP Cadre.
He was involved in the formulation, implementation and evaluation of the “Single Window”
system in the Agriculture Credit and Marketing cooperative structure of AP.
Some of his Other Publications: 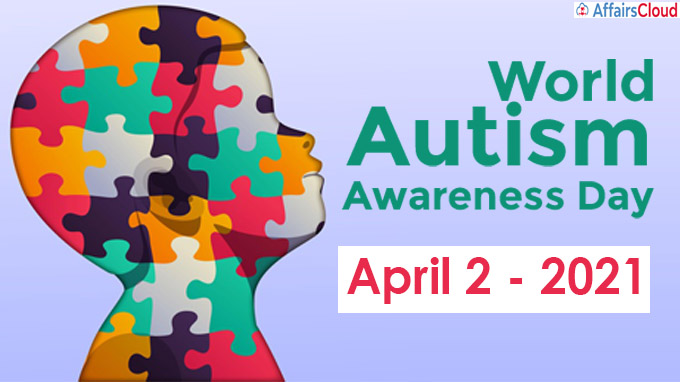 i.International Children’s Book Day(ICBD) is annually observed across the globe on or around 2nd April, the birth anniversary of Danish Author Hans Christian Andersen, famous for his fairy tales for children. The first ICBD was celebrated in 1967.
ii.Theme of ICBD 2021 is “The Music of words”.United States Board on Books for Young People (USBBY) is the sponsor of 2021’s ICBD Poster. The theme of 2021 ICBD Poster is “The Music of words”.
iii.The 2021 ICBD sponsor is the United States Board on Books for Young People (USBBY).
iv.The Hans Christian Andersen Award 2020 (Author) was presented to Jacqueline Woodson(America) and the award for an illustrator was presented to Albertine(Switzerland).
About International Board on Books for Young People(IBBY):
President– Mingzhou Zhang
Headquarters– Basel, Switzerland
>>Read Full News