The Ministry of Home Affairs (MHA) has constituted 5 new Inter-Ministerial Central Teams (IMCTs) to review the grave situation arising out of Coronavirus (COVID-19), taking the total of such teams to 11. i.According to Times Higher Education(THE)’s 2nd edition of Impact rankings 2020, which has ranked 766 universities from 85 countries, The Indian Institute of Technology(IIT) Kharagpur is ranked 57th with a score of 87.9 among global universities.
ii.The list is topped by the University of Auckland, New Zealand with a score of 98.5….Click here to Read More 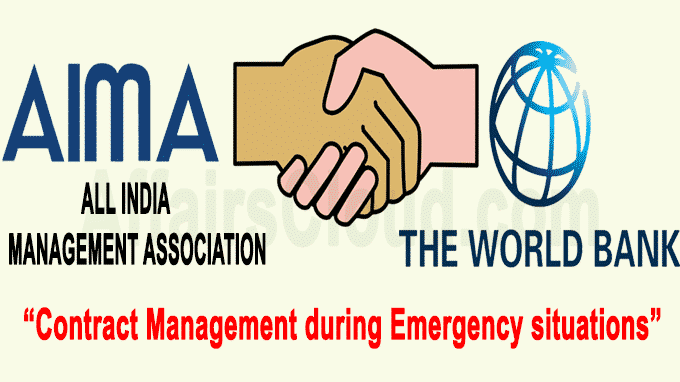 World Bank (WB) has joined hands with AIMA (All India Management Association) to organize a virtual workshop called “The Contract Management during Emergency situations” with the aim to create awareness about the likely impact of the coronavirus (COVID -19) pandemic on the implementation of the bank-funded Jhelum Tawi Flood Recovery Project (JTFRP)….Click here to Read More 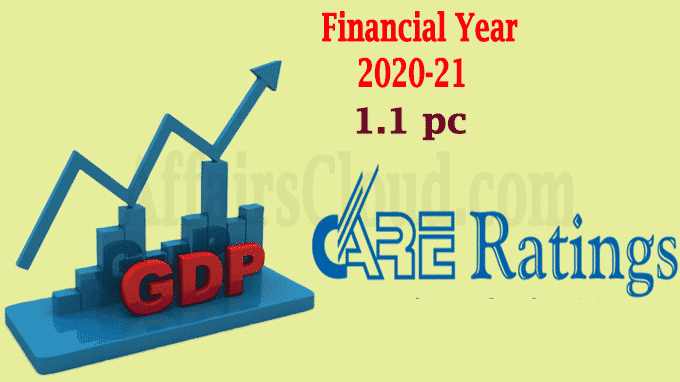 i.Gross Value Added (GVA) has been estimated to grow at 1.4% for FY21.
ii.Overall growth is expected to be driven only by the government expenditure.
iii.The agency also revised the GDP forecast for FY20 by declining it to 4.7% from 5% with GVA growth expected at 4.6%.
iv.CARE has assessed 8 sectors for GDP projection of FY21 out of which 3 sectors are anticipating a declineviz. mining and quarrying, manufacturing and construction….Click here to Read More

On 24th April 2020 the ICICI Prudential Mutual Fund Bharat-22 ETF picked up share of value Rs.59 Crore in the National Aluminium Company (NALCO) through the open market transaction.The National Stock Exchange (NSE) said that more than 1.71 crore shares were bought at an average of Rs.34.43 apiece.
This got the total deal value to Rs.58.9 crore and the NALCO’s shares ended at Rs.30.95 apiece, down 8.16% on the NSE.
50 lakhs shares of Reliance Naval and Engineering Ltd were sold by the Yes Bank for Rs.65 Lakhs and Rs.1.13 Lakhs worth shares were sold by a private lender on 23rd April 2020.
On 24th April 2020, The shares of Reliance Naval and Engineering ended at Rs.1.3 apiece, up 4%
About NALCO:
NALCO is under the Ministry of mines belongs to the Navaratna group ‘A’CPSE having integrated and diversified operations in mining, metal and power.
Headquarters– Bhubaneswar, Odisha,India
Chairman– Sridhar Patra
About ICICI Prudential Mutual Fund:
It is a joint venture between ICICI Bank and Prudential Plc, a UK financial services sector.
It is a second largest asset management company in India
MD & CEO– Nimesh Shah
Headquarters– Mumbai
Founded– 1993

On April 24, 2020 IIFL Wealth Management has acquired entire(100%) equity shares of Larsen & Toubro Capital Markets(LTCM), a wholly-owned subsidiary of L&T Finance Holdings (LTFH) for Rs 230 crores plus available cash balance of LTCM after  receiving requisite regulatory approvals.
Key Points
i.LTCM had a total income of Rs 124.81 crores while the net worth stood at Rs 82.45 crore at the end of March 2019 & has assets of Rs 20,807 crores as of April 21.
ii.IIFL Wealth Management is an investment and financial advisor to over 5,600 influential families in  high net worth individuals (HNIs) and ultra HNI segments in India and abroad, with aggregate assets of more than 24 billion dollars under management
iii.It has more than 900 employees and presence in 6 major global financial hubs and 23 locations in the country.
About LTCM:
Headquarters– Mumbai, Maharashtra
About IIFL Wealth Management:
Headquarters– Mumbai, Maharashtra
Founder, MD & CEO– Karan Bhagat 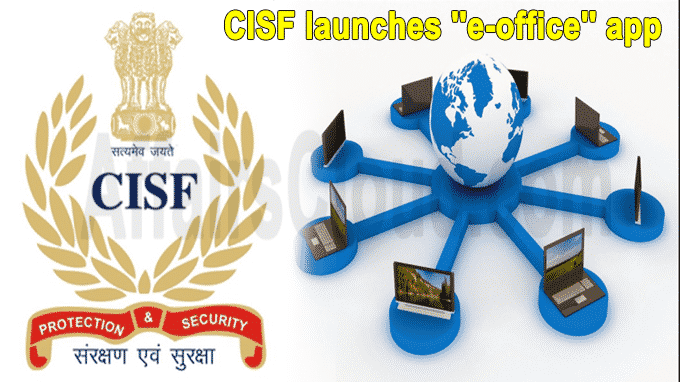 i.Central Industrial Security Force(CISF) launched ‘e-karyalay’ an electronic office application to enable the movement of files and documents without physical touch so as to prevent coronavirus infection.
ii.App’s ‘Dak’ or letters management section handles all sorts of communication between various levels of functional hierarchy & it enables to transfer the dak(snail mail)  directly to the file noting….Click here to Read More

Unified Geologic Map of the Moon: 1st ever digital geological map of moon released by US Geological Survey i.It was released by thescientists from USGS(United States Geological Survey) Astrogeology Science Center, in collaboration with NASA (National Aeronautics and Space Administration) and the Lunar Planetary Institute.
ii.It will serve as a blueprint for future human missions and a source of research and analysis for the educators and the general public interested in lunar geology.
iii.Moon is the closest cosmic body to Earth.
iv.S Harrel, a NASA Space Grant student, mapped the surface features of the moon….Click here to Read More 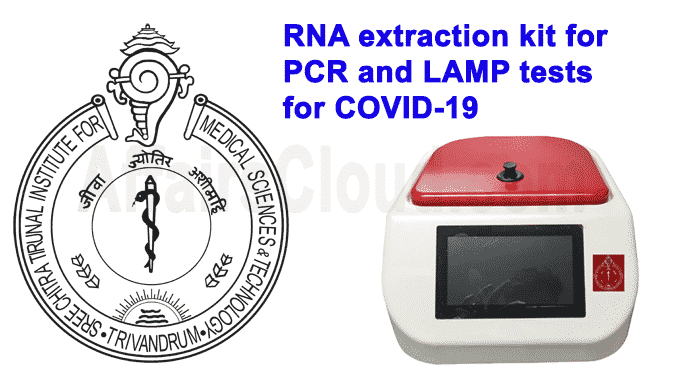 i.It is developed by Dr Anoop Thekkuveettil and his team, which has earlier, came up with Chitra GeneLAMP-N.
ii.Chitra Magna provides a highly purified and concentrated level of RNA of the causative virus of COVID-19 pandemic i.e.SARS-COV-2.
iii.The technology of Chitra Magna has been transferred to the Agappe Diagnostics Ltd Ernakulam.
iv.It uses a magnetic nanoparticle to capture and concentrate the RNA from a swab sample….Click here to Read More i.On April 24, 2020, China National Space Administration (CNSA) has named its first Mars exploration mission as “Tainwen-1” and also released its logo “Lanxingjiutian” during the online celebration of “Space Day“.
ii.Tianwen-1 is set to be launched in July 2020 with an aim to complete orbiting, landing and roving in one mission.
iii.India became the first Asian country to have successfully launched its Mars orbiter mission, Mangalyaan in 2014….Click here to Read More 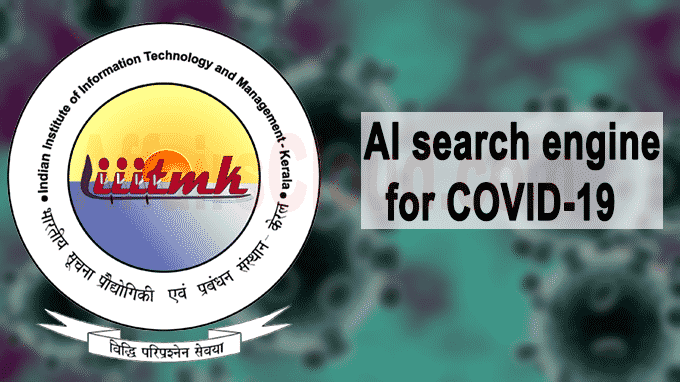 On April 23, 2020, The Indian Institute of Information Technology and Management- Kerala (IIITM-K) has developed anAI (Artificial Intelligence) semantic search engine “Vilokana” to enable researchers to get deeper insights into scientific studies and to find an early solution to the COVID-19 crisis. The user can supply keyword-based queries, the meaning of which the search engine will be able to understand, and find the relevant text from the scientific papers….Click here to Read More Astronomers at the Universidade Estadual Paulista in Brazil, have discovered 19 interstellar asteroids (asteroids from outside our solar system) orbiting the sun between Jupiter and Neptune.
i.These asteroids are belong to a group of space objects called ‘Centaurs’ & has been present almost since the very inception of the solar system, 4.5 billion years ago….Click here to Read More On April 24, 2020, Mathias Boe, 39 years old, badminton doubles player from Denmark announced retirement from international badminton. He won silver medallist at the 2012 London Olympics and 2013 World Championships.
Key Points:
i.Boe planned to retire after either the Badminton World Federation (BWF) Thomas Cup in May or the Tokyo 2020 Olympic Games, both of which have been postponed because of the coronavirus pandemic.
ii.About Mathias Boe: In his career spanning two decades, he has partnered with Michael Jensen, Thomas Hovgaard and Michael Lamp, before striking up a successful long-term combination with CarstenMogensen.
iii.Mathias, who made his international debut in 1998, along with Mogensen had reached the final of their first tournament together the US Open 2004.
iv.Mathias was also part of the team that won the Thomas Cup in 2016. They were frequently on the podium at the Superseries events and also won the coveted All England (2011, 2015) twice apart from three straight World Superseries Finals (2010, 2011, 2012) titles.
v.The partnership with Mogensen split in March 2019, after which Mathias combined with Mads-Conrad Petersen and he was coached by Jakob Hi.
About Badminton World Federation (BWF):
President – Poul-Erik Høyer Larsen
Headquarters– Kuala Lumpur, Malaysia. 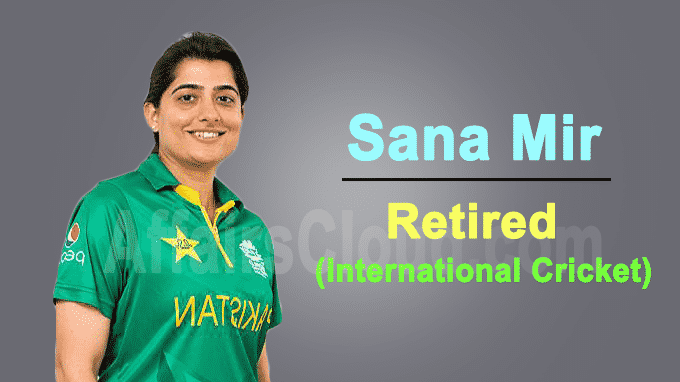 On 25th April 2020, Former Pakistan skipper and Women Cricket team Captain, Sana Mir announced her retirement from international cricket at the age of 34, ending her 15 year career currently ranking 9th in ICC’s ODI and 41st in T20I bowlers list
Career Highlights:
i.Sana Mir, right handed batter made her debut in One Day International(ODI) against Sri Lanka in Karachi in December 2005 and her ODI in Lahore against Bangladesh in November 2019. In 120 ODIs she took 151 wickets.
ii.She made her Twenty20 International(T20I) debut in Dublin against Ireland in May 2009 and her last T20Is in Lahore against Bangladesh in October 2019. In 106 T20Is she took 89 wickets and scored 802 runs.
iii.She featured in a total of 226 international matches which includes the 137 matches from 2009 to 2017 as the team captain for Pakistan.
iv.She topped the International Cricket Council (ICC) Women’s Ranking for the ODI bowlers in October 2018, being a vital player in the Pakistan bowling lineup.
v.She is one of the nine women cricketers who has taken 100 wickets and scored 1000 runs in the ODIs.
vi.In her captaincy the Pakistan women’s cricket team had won 26 ODI, and 26 T20Is.
She was the skipper of Pakistan in the World Cup 2013 and 2017 and five ICC Women’s T20 World Cups (2009, 2010, 2012, 2014 and 2016)
vii.She improved the profile of the Pakistan Women’s Cricket team in Pakistan and enhanced the image of Pakistan globally.
About Pakistan Women’s National Cricket Team:
One of the eight teams participating in the ICC Women’s Championship.
Captain– BismahMaroof
Coach– Iqbal Imam
Founded– 1997 On April 23, 2020, Usha Ganguly, was an Indian theatre director-actor and activist, most known for her work in Hindi theatre in the 1970s and 1980s, passed away at the age of 75 in Kolkata, West Bengal. She was born in Jodhpur, Rajasthan in 1945.
Key Points:
i.AboutUshaGanguly: She founded Rangakarmee theatre group in 1976, known for its productions like Mahabhoj, Rudali, Court Martial and Antaryatra.
ii.Apart from thespian ShyamanandJalan of Padatik (one of the institutions in the field of performing arts in India, especially theater and dance), Usha was the only theatre director to practise Hindi theatre in Kolkata, which is largely Bengali speaking.
iii.Usha’s Bengali productions include Mukti and Manasa. She also worked with RituparnoGhosh during the scripting for Raincoat.
iv.Awards: She was awarded with the SangeetNatakAkademi Award for Direction given by SangeetNatakAkademi, India’s National Academy of Music, Dance& Drama in 1998.
v.Usha was also honoured by the West Bengal government as the “Best Actress” for the play ‘GudiaGhar’ and “GirishSamman” honour in 2016 for her contribution to theatre.

International Day of Multilateralism and Diplomacy for Peace 2020: April 24 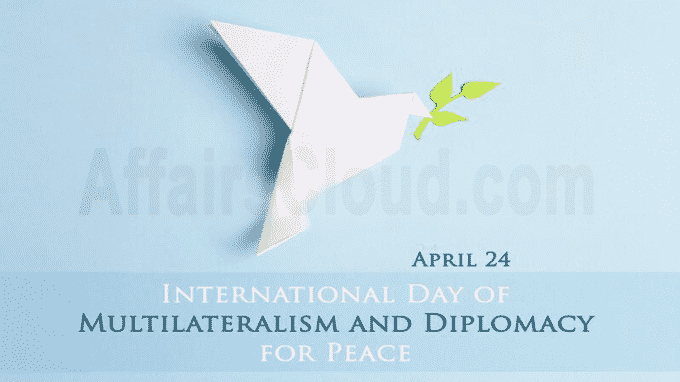 International Day of Multilateralism and Diplomacy for Peace is observed on April 24 annually to support the UN (united Nations) Charter and its principles of resolving disputes among nations through peaceful means. Multilateralism refers to an alliance of multiple countries pursuing a common goal i.e. peace and security….Click here to Read More 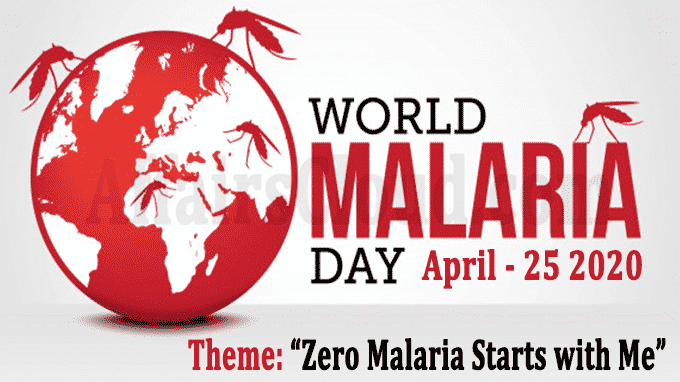 25th April 2020 is observed as World Malaria Day to recognise the global efforts made to control malaria and to commemorate the Africa Malaria Day. It is one of the eight official global public health campaigns recognised by the World Health Organisation(WHO). The theme of World Malaria Day 2020 is “Zero Malaria Starts with Me”.….Click here to Read More

The United Nations (UN) organized the first official International Delegate’s Day on April 25, 2020, to raise awareness of the role of representatives and delegates of the Member States to the UN. This year is a special observance because it also marks the 75th anniversary of the San-Francisco Conference, an event that laid the foundations of the United Nations (UN)….Click here to Read More 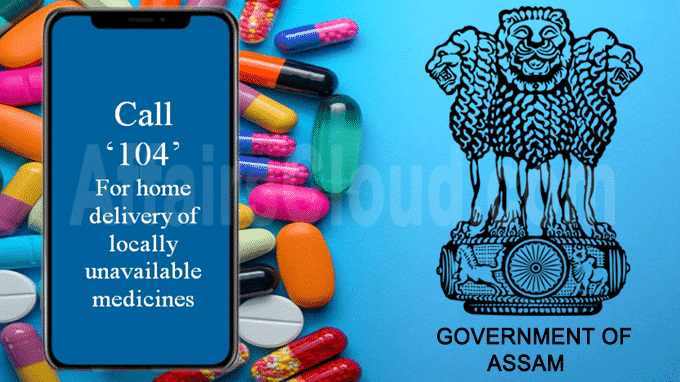 The Assam state government has launched a special scheme called ‘Dhanwantari’, under which locally unavailable medicines will be delivered to patients at home by MPWs (Multipurpose Health Workers), ASHA (Accredited Social Health Activist) workers.
This medicine is free up to 200 rupees & can be availed by calling 104….Click here to Read More 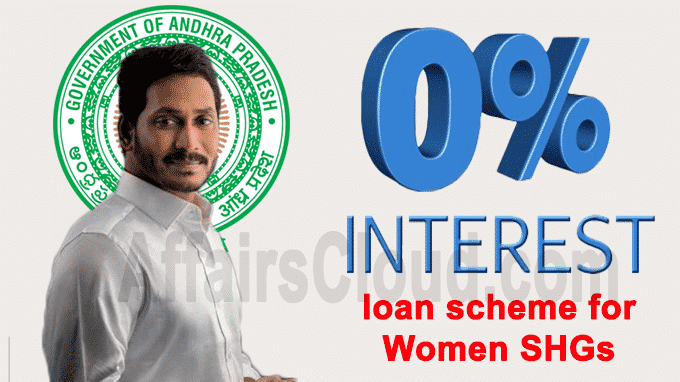 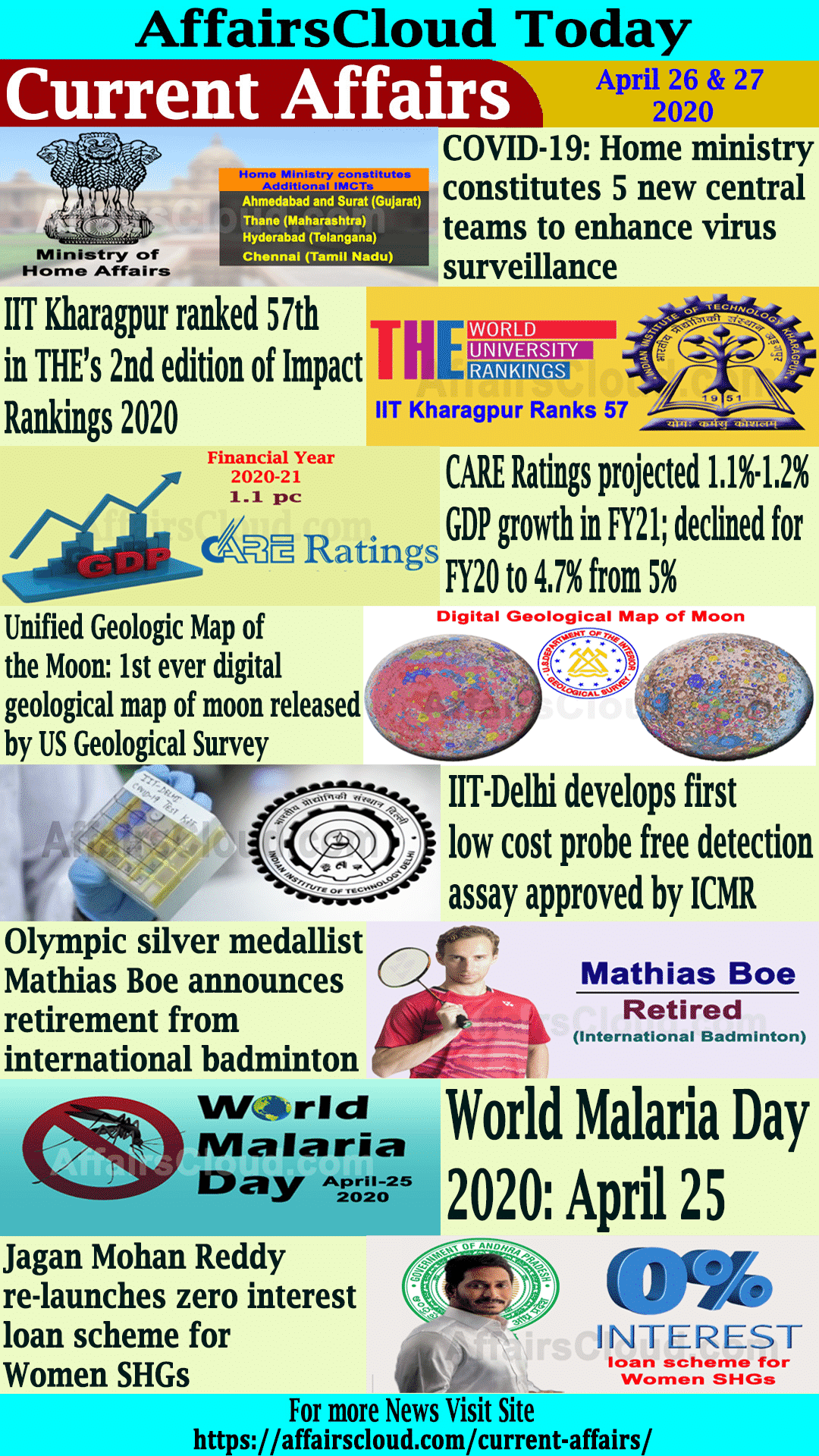