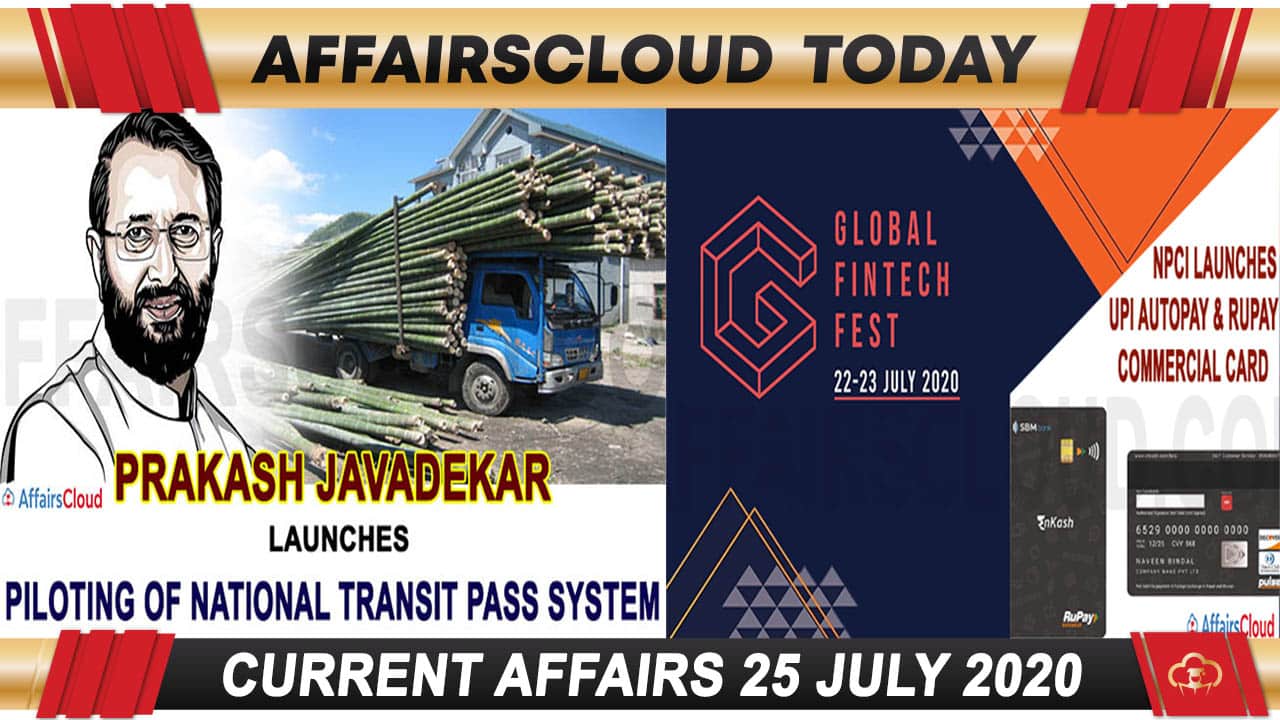 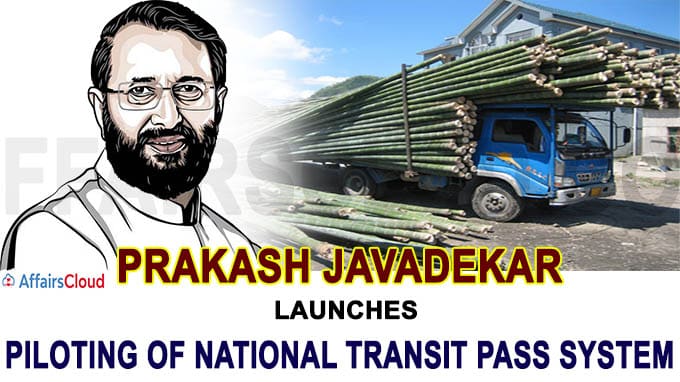 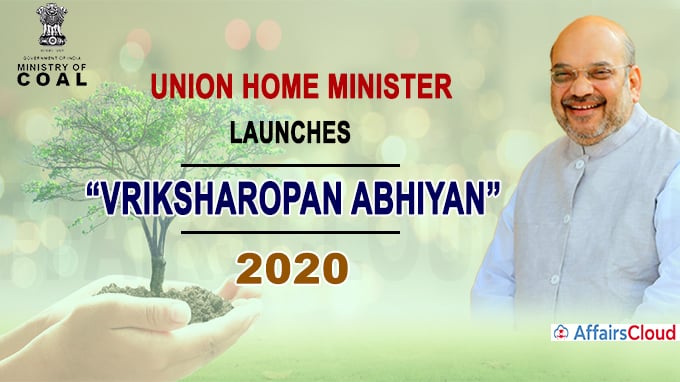 The Navy’s largest Solar plant was inaugurated at the INA, Ezhimala 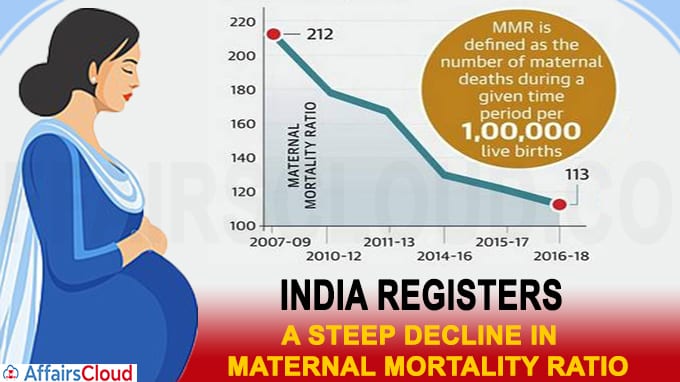 i.In accordance with the “Special Bulletin on Maternal Mortality in India 2016-18”, released by the Office of the Registrar General’s Sample Registration System (SRS), the Maternal Mortality Ratio (MMR) in India has declined to 113 in 2016-18 from 122 in 2015-17 and 130 in 2014-2016 andd almost 100 deaths lesser than in the period of 2007-2009.
ii.States have been categorized into three groups namely, Empowered Action Group (EAG) States, Southern States and Other States during the survey.
iii.The southern States registered a lower MMR — Andhra Pradesh (65), Telangana (63), Karnataka (92), Kerala (43) and Tamil Nadu (60) as compared to states of Assam & EAG.
iv.In the category of other status Punjab has a maximum MMR of 129.
About Office of the Registrar General & Census Commissioner, India (ORGI):
The Office of the Registrar General, India works under the Ministry of Home Affairs (MHA).
Registrar General & Census Commissioner– Dr. Vivek Joshi
<< Read Full News >> 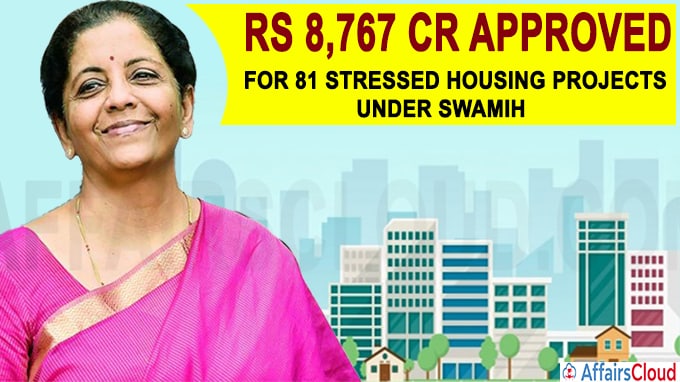 i.Union Minister for Finance & Corporate Affairs, Nirmala Sitharaman informed that so far Rs 8767 crore has been approved for 81 projects under Special Window for Affordable and Mid Income Housing (SWAMIH) Investment Fund I.
ii.The approved projects will enable the completion of almost 60,000 homes across India.
iii.The announcement was made when the performance of SWAMIH was reviewed with Secretaries of Ministries of Finance and senior management team of the State Bank of India, SBI Capital Markets Limited and SBICAPS Ventures Limited (SVL).
<< Read Full News >> 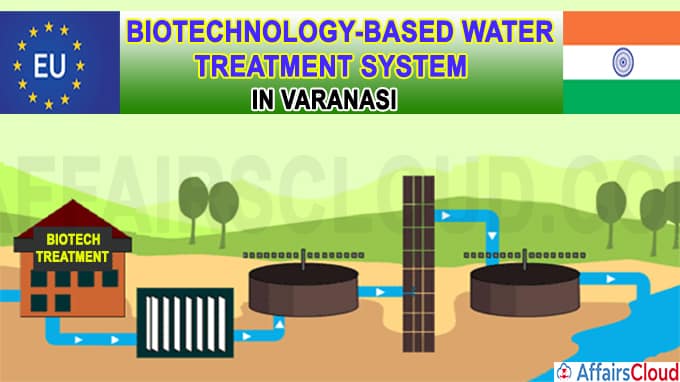 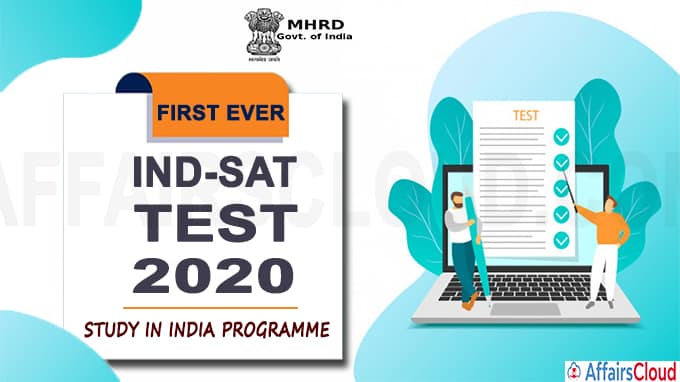 The Ministry of Human Resource & Development (MHRD) conducted the first ever Indian Scholastic Assessment (Ind-SAT) Test 2020 under study in India Programme on July 22, 2020. The exam was conducted in the proctored Internet mode by the National Testing Agency. 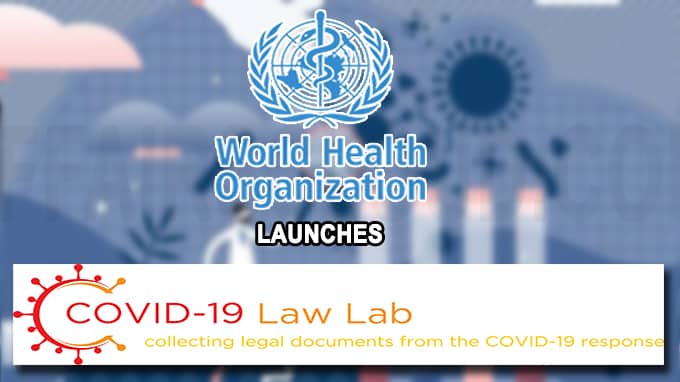 i.The World Health Organization (WHO) along with other key bodies had launched COVID-19 Law Lab(www.COVIDLawLab.org).
ii.It is a database of laws that countries had implemented in response to the COVID-19 pandemic.
iii.The lab is a joint project of the United Nations Development Programme (UNDP), WHO, the Joint United Nations Programme on HIV/AIDS (UNAIDS) and the O’Neill Institute for National and Global Health Law at Georgetown University.
About WHO:
Headquarters– Geneva, Switzerland
Director-General– Tedros Adhanom Ghebreyesus
<< Read Full News >> 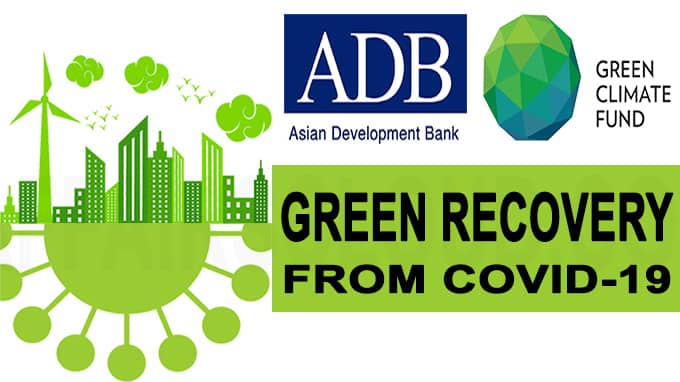 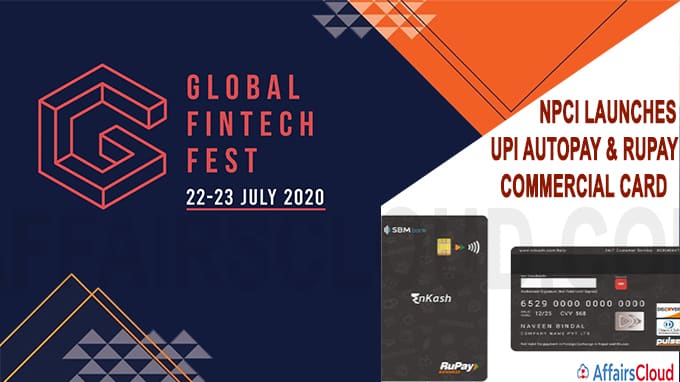 RBI Releases Report of Committee For Analysis of QR Code headed by Prof. Deepak B Phatak 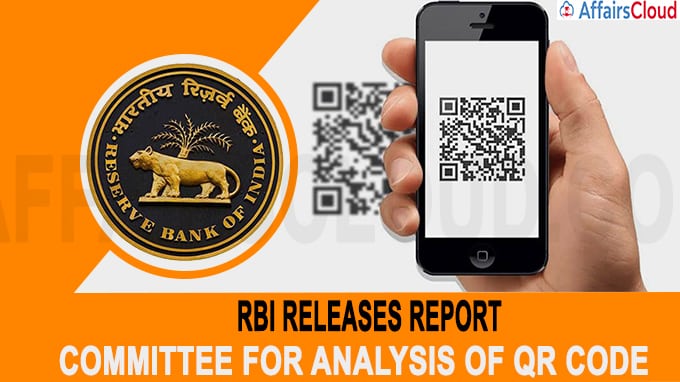 i.On July 22, 2020, the Reserve Bank of India (RBI) publicized the “Report of the Committee for Analysis of QR (Quick Response) Code” under the chairmanship of Prof. Deepak B. Phatak on its website for  comments / suggestions of various industry players.
ii.The committee has recommended phasing out of proprietary, closed loop QR codes as it requires customers to manage separate apps. Instead RBI must encourage the use of interoperable QR codes such as the Bharat QR and UPI QR to enable faster on-boarding of all types of merchants for digital payments.
iii.Government / RBI should allow a controlled interchange instead of zero Merchant Discount Rate (MDR) on QR code / UPI / RuPay Debit card transactions,
iv.Tax incentives should be provided to merchants who accept payments through electronic mode.
v.For consumers also, the government should provide incentive schemes to ensure popularity of QR code transactions.
About Reserve Bank of India (RBI):
Headquarters– Mumbai, Maharashtra
Formation– 1 April 1935
Governor– Shaktikanta Das
Deputy Governors– 4 (Bibhu Prasad Kanungo, Mahesh Kumar Jain, Michael Debabrata Patra, one is yet to be appointed).
<< Read Full News >> 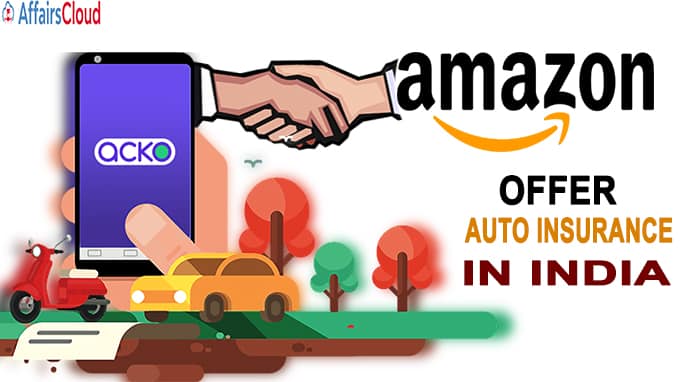 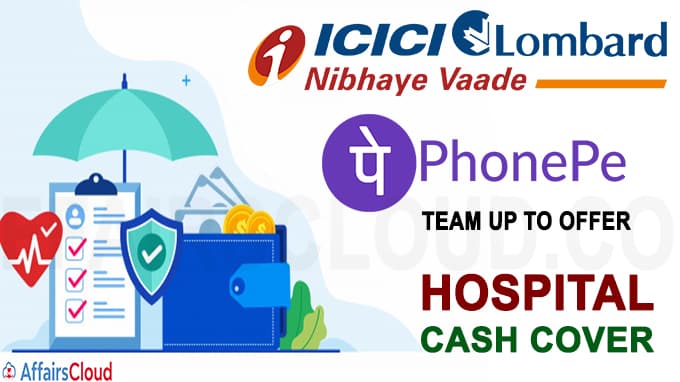 i.ICICI Lombard in partnership with PhonePe has launched Hospital Daily cash benefit under its Group Safeguard Insurance policy, a sachet-based group insurance product.
ii.It is a customized hospitalisation policy that allows PhonePe users to get an assured amount if they are hospitalised due to injury or illnesses(including COVID-19).
iii.The hospital bills are not required for the claim, a discharge certificate will be sufficient in most cases for the claim processing.
About PhonePe:
HeadQuarter– Bengaluru, Karnataka
Chief Executive Officer(CEO)– Sameer Nigam
About ICICI Lombard:
HeadQuarter– Mumbai, Maharashtra
Managing director(MD) & CEO– Bhargav Dasgupta
<< Read Full News >> 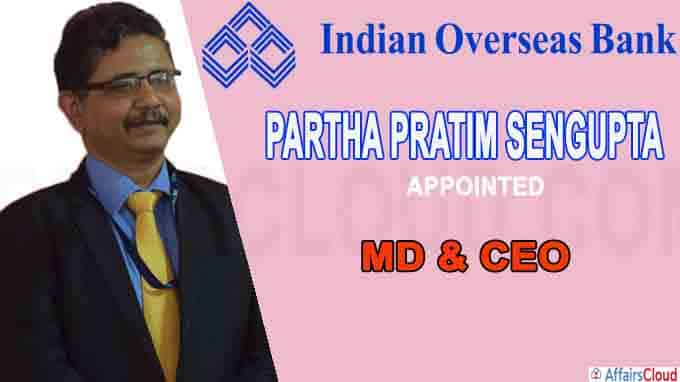 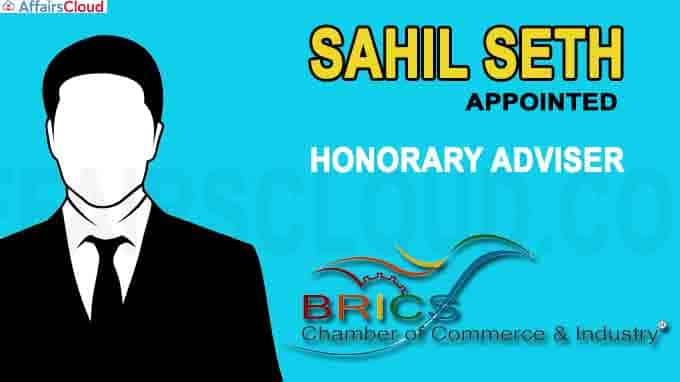 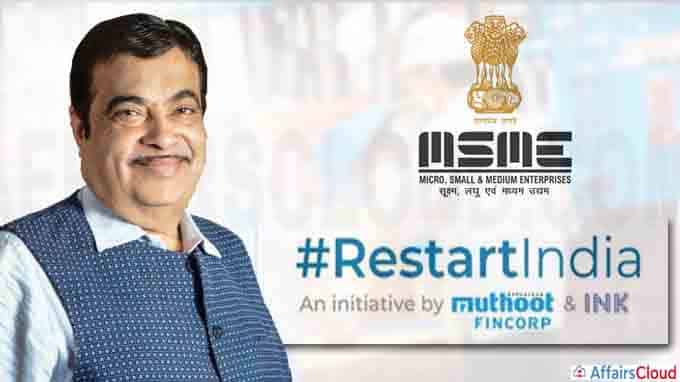 On 23dr July 2020, Nitin Jairam Gadkari, Union Minister of Micro, Small and Medium Enterprise(MoMSME), launched www.restartindia.com, a mentoring platform.It was initiated jointly by Muthoot Fincorp and INKtalks to support the MSME sector to restart the business across the nation.
The RestartIndia platform provides global management information and expertise to the common people and connects them to the experts and professionals from various fields, that are in line with the self-dependent India (Atmanirbhar Bharat) project.
About Muthoot Fincorp Ltd:
Managing Director– Thomas John Muthoot
Head Office– Trivandrum, Kerala
About Ministry of Micro, Small and Medium Enterprise(MoMSME)
Union Minister– Nitin Jairam Gadkari (constituency – Nagpur,Maharashtra)
<< Read Full News >>

i.A Space start up namely Digantara Research and Technology (DRT) which has developed India’s first in-orbit space debris monitoring and tracking system that works on LIDAR (Light Detection and Ranging) technology has been selected by SID (Society for Innovation and Development) incubation program at the Indian Institute of Science (IISc) Bangalore.
ii.In this regard, the startup has received a grant of Rs 25 lakhs which will be used to develop space debris monitoring systems and the company’s expansion.
About Digantara Research and Technology (DRT):
It is founded by Anirudh Sharma and Rahul Rawat.
Headquarter– Kotdwara, Uttarakhand
<< Read Full News >>

A 34 years old Female fast bowler Sripali Weerakkody who represent for Sri Lanka in International Crickets has announced her retirement from all forms of Cricket.She played 89 ODIs and 58 T20Is.She totally picked 89 wickets in her career.

she became the first woman cricketer from Sri Lanka to qualify as a fitness trainer from the Australian Institute of Fitness.

A book titled “The Endgame” authored by Hussain Zaidi S Hussain Zaidi,a well known crime writer has recently written a novel named “The Endgame”.It was published by the HarperCollins India.The book speaks about the politics, betrayal, and unimaginable terror.

“Black Friday”, “Mafia Queens of Mumbai”, “Dongri to Dubai” and “Byculla to Bangkok” are other notable books written by him. He was the associate producer of “Terror in Mumbai”,a famous HBO documentary based on 26/11 terror attacks. 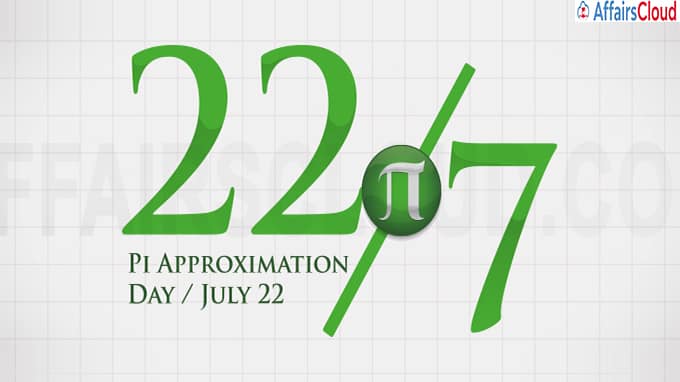 Pi approximation day is observed annually on July 22. It is dedicated to the mathematical constant pi (π).  The day is also called Casual Pi Day. Pi denotes the relationship between a circle’s circumference and its diameter and is denoted by the fraction 22/7 which calculates approximately to 3.14.
Why is this date and month celebrated?
In the fraction 22/7, the numerator 22 symbolizes the date and denominator 7 indicates the month(July).
Related Days
Pi day – Also known as International Day of Mathematics is observed on March 14 every year. The date has been selected because the first three digits of the date(March 14 (3/14 or 3-14)) and also correspond to the first three digits of Pi – 3.14.
Two Pi Day– It is also known as Tau Day for the mathematical constant tau (τ), is observed on June 28.
Key Facts about Pi 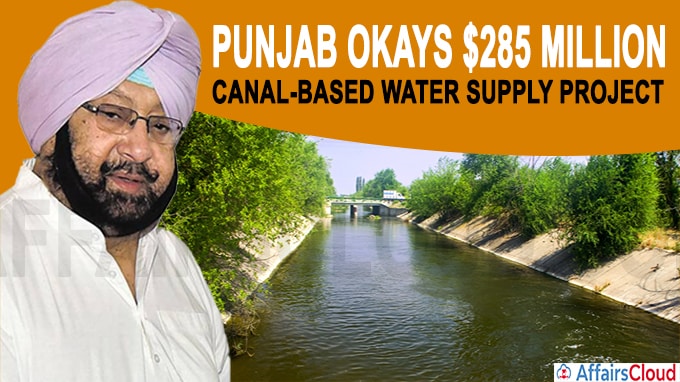 Actor Sonu Sood has launched an app “ Pravasi Rojgar” to offer support to workers in finding right job opportunities in various sectors across the country.This  initiative will be supported by community outreach in the villages to find the right employment opportunities for migrant workers in different parts of the country.

Veteran Odia Actor Bijay Mohanty has passed away at the age of 70 years in Bhubaneswar, Odisha, who earned National Film Award in his debut film, Chilika Tire and famous for his negative roles in films including Samay Bada Balaban, Naga Phasa, Danda Balunga and Chaka Bhaunri. 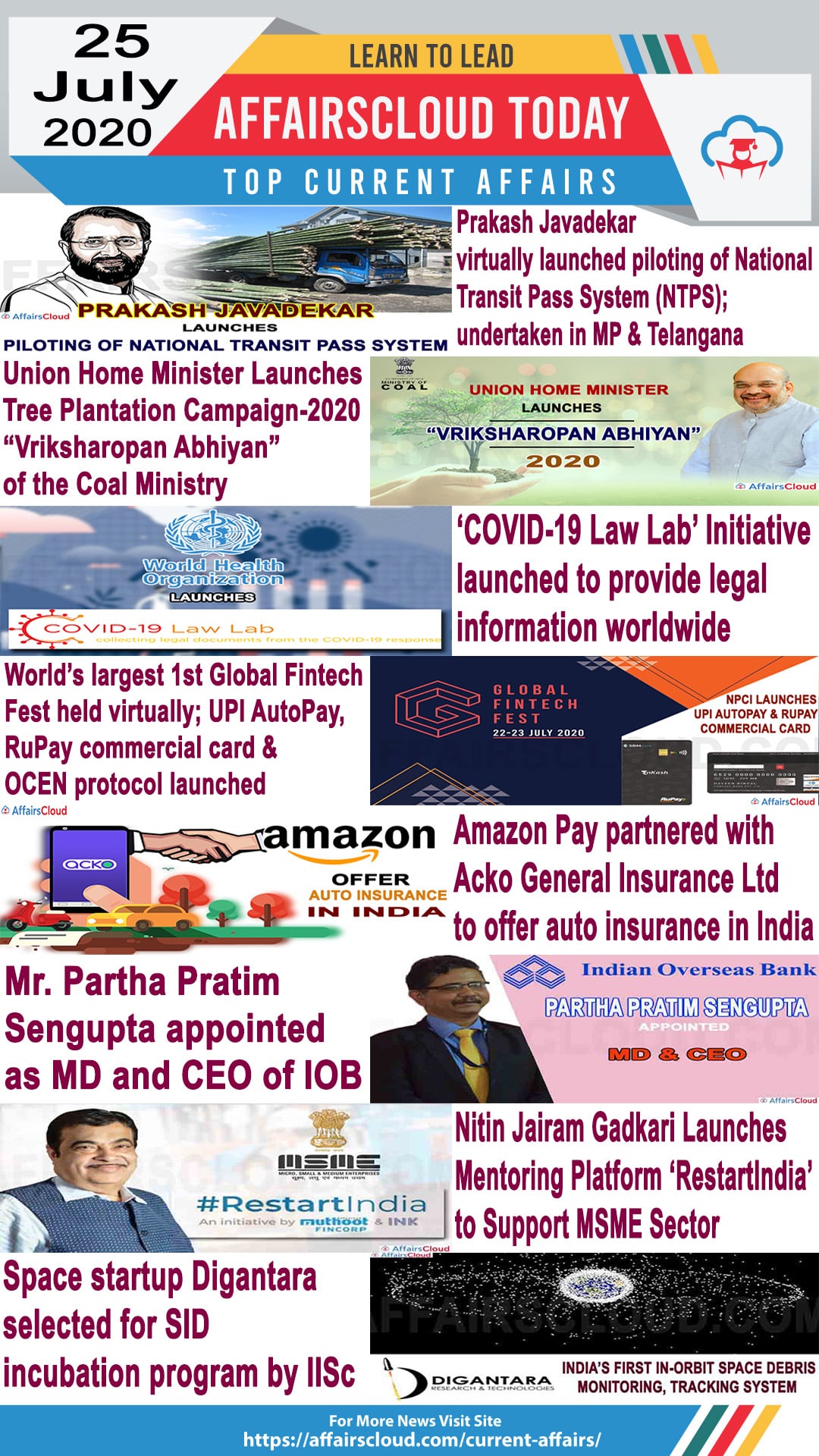