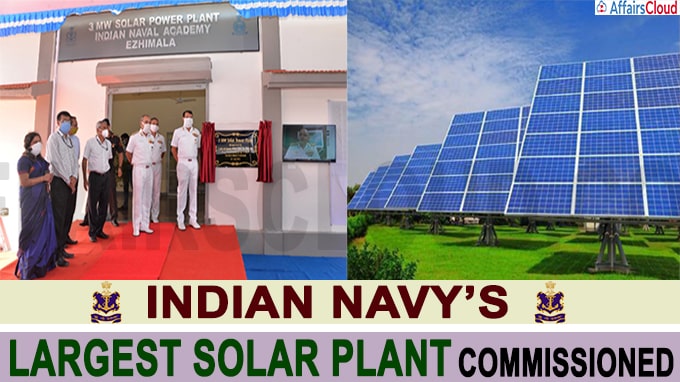 The project is a part of the Indian Government’s initiative of National Solar Mission, to achieve 100 GigaWatt (GW) of solar Power by 2022.

Highlights about the solar plant

i.It is the largest established power plant by the Indian Navy with a lifespan of 25 years.

i.The Kerala State Electric Board (KSEB) played a major part on this project despite COVID-19 pandemic.

iii.The solar power plant will reduce the carbon footprint in Ezhimala academy, Kannur and lead a path to a clean and green environment.

The Power Plant was set up at the Western Naval Station, Karanja in Maharashtra’s Uran.

i.It is built at a cost of Rs. 14 crores and it is one of the largest solar plants in that region.

ii.It will save upto 20 to 30% of the power requirement which saves Rs. 30 lakhs per month.

On April 29, 2020 According to Mercom India Research’s ‘India Solar Market Leaderboard 2020’ report, India has installed 7.3 Giga Watt (GW) of solar power in Calendar Year(CY) 2019 which consolidates its position as the 3rdlargest solar market in the world after China and U.S. India has total solar installations of approximately 35.7 GW by the end of December 2019.