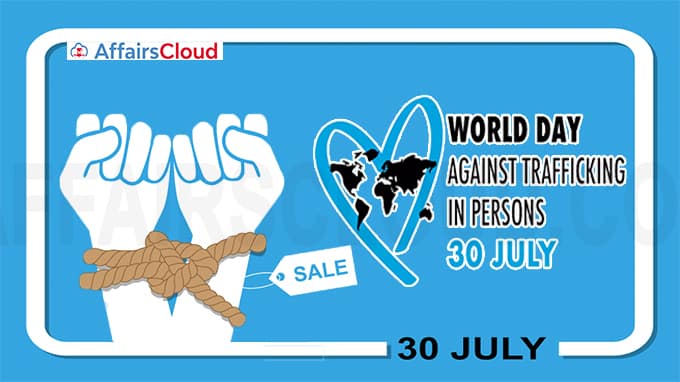 The United Nations (UN) observed the “World day against trafficking in Person” annually on July 30. The day is celebrated to raise awareness about the conditions of the victims of trafficking and to protect their rights.  Human trafficking is a crime that exploits women, children and men for numerous purposes including forced labour and sex.

Theme for 2020World day against trafficking in Person as per United Nations Office on Drugs and Crime (UNODC) is “Committed to the Cause: Working on the Frontline to End Human Trafficking”

i.The day was announced as World day against trafficking in persons in the year 18 December 2013 by the UN General Assembly.

ii.A high level meeting was held by the UN General Assembly in order to form a global plan against the Trafficking in persons.

iii.Over 2 lakhs victims were identified worldwide with the year 2003 by the UN Office on Drugs and Crime (UNODC)

i.The first responders of the UN are those who identify, support, counsel and those who work against the unpunished traffickers.

iii.Amid the COVID-19 pandemic the UN office with UNODC decided to honour the hard work of the responders.

iv.According to the ILO (International Labour Organization) up to 21 million victims are forced under sexual trade.

There are 7 campaigns initiated against trafficking, they are

Acts passed against Trafficking in India:

ii.June 12 of Every year is observed as the World Day Against Child Labour which was launched by the International Labour Organization (ILO) in 2002 to focus on the global extent of child labour and the steps to be taken to eliminate it.