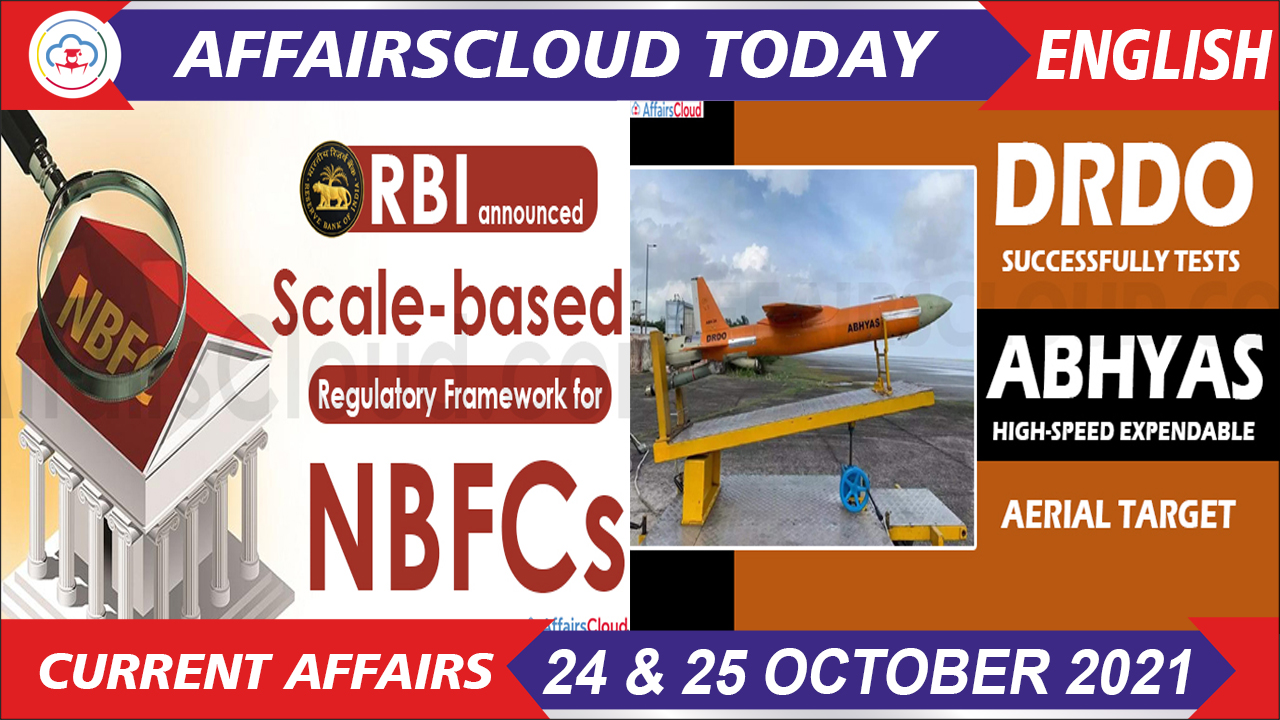 Note:
The Indian Railways Organisation for Alternative Fuel (IROAF) under the ministry of railways was dissolved on 7th September 2021.
About the closure of IRSDC:
i.The board ordered to initiate all necessary procedural formalities for the closure of IRSDC.
ii.The stations managed by IRSDC and the projects related documents shall be handed over to respective Zonal Railways. The zonal railways will take over the station’s projects.
Background:
The IRSDC has been dissolved in line with the recommendation of Sanjeev Sanyal, Principal Economic Advisor of the Finance Ministry for the rationalisation of railway bodies by closing down or merging multiple organisations.
About Indian Railway Station Development Corporation(IRSDC):
IRSDC, a Joint Venture company of Rail Land Development Authority (RLDA) and Ircon International Limited (IRCON) is a Special Purpose vehicle.
MD&CEO– Sanjeev Kumar Lohia
Incorporated on 12th April 2012
Headquarters– New Delhi 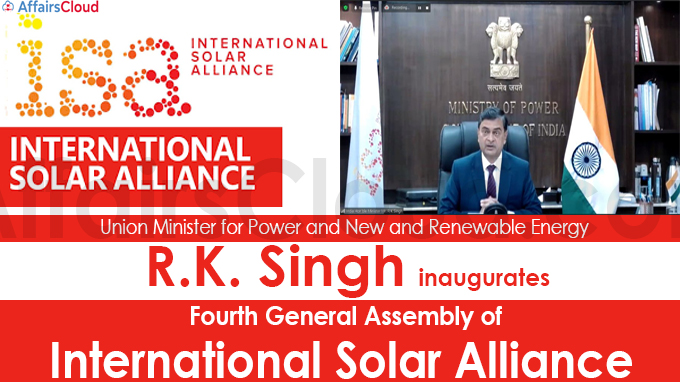 i.On October 18-21, 2021, the 4th General Assembly of the International Solar Alliance (ISA) held virtually which was inaugurated and presided over by Union Minister Raj Kumar Singh, Ministry of Power and the President of the ISA Assembly.
ii.ISA approved the ‘One Sun’ political declaration for the launch of Green Grids Initiative-One Sun One World One Grid (GGI-OSOWOG) at COP26 (Conference of the Parties) to be held in Glasgow, Scotland from October 31-November 12, 2021.
iii.During the assembly, two new programs of ISA were launched viz. Management of Solar PV panels & battery usage waste; and Solar Hydrogen programme.
About International Solar Alliance (ISA):
ISA co-founded by India and France during the 2015 climate change conference in Paris, France
Director General– Dr. Ajay Mathur
Headquarters– Gurugram, Haryana
>>Read Full News The government of India handed over the Jaynagar-Kurtha, a 34.9km-long cross-border rail link, which connects Jaynagar, Bihar to Kurtha, Nepal, to the government of Nepal. On 22nd October 2021, Uddhav Balasaheb Thackeray, Chief Minister of Maharashtra, inaugurated India’s 1st State government owned Wildlife DNA testing analysis laboratory at Regional Forensic Science Laboratory (RFSL) in Nagpur, Maharashtra. On the occasion he also launched 3 FastTrack DNA testing units in Mumbai & Pune under the Nirbhaya scheme.
i.At present there are 2 Wildlife DNA testing laboratories at Dehradun & Hyderabad, which are fully owned by the Central Government, whereas the newly launched is the 1st in India to be owned by a state government.

ii.With the 3 new FastTrack DNA testing units, Maharashtra has a total of 5 such units to increase the efficiency of criminal investigations. 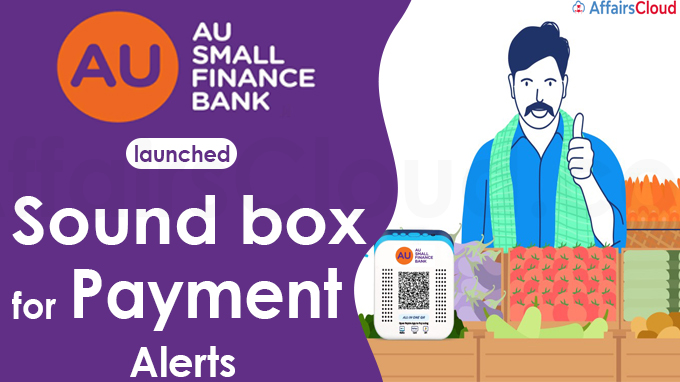 On the lines of the guidelines issued by Reserve Bank of India (RBI) in September 2021, on October 22, 2021, Fintech firm Razorpay launched a tokenization solution namely ‘Razorpay TokenHQ’. It will work across all major card networks including Mastercard, RuPay and Visa.

What are RBI Guidelines for tokenization?
RBI mandated to store customer’s card information in the form of an encrypted form i.e. Card-On-File (COF) tokenization to secure transactions. COF turns sensitive cardholder data into randomly generated numbers called “token” with no meaningful value, if breached. These tokens then allow payments to be processed without disclosing any customer details. 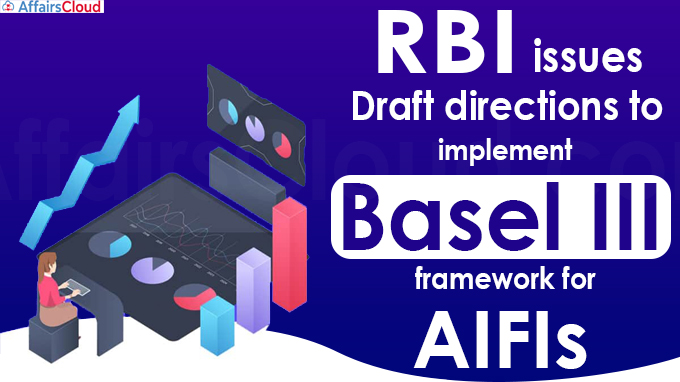 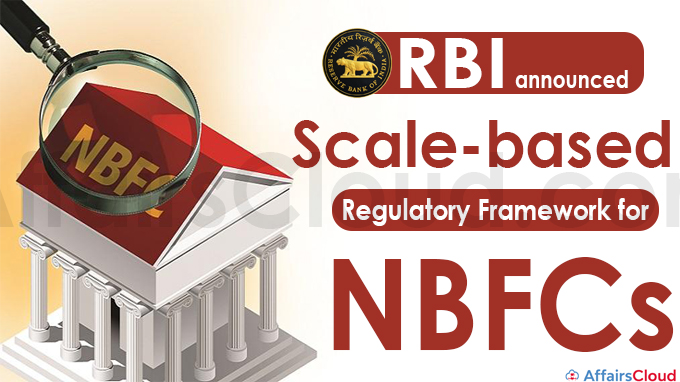 On October 22, 2021, the Reserve Bank of India (RBI) has introduced a revised regulatory framework for Non-Banking Finance Companies (NBFCs) named ‘Scale Based Regulation’ (SBR) to regulate the NBFCs based on their size, activity, complexity, and interconnectedness within the financial sector.

About SBR Regulatory framework in Brief:
i.Structure of NBFCs: Under the SBR framework, NBFCs are categorised into 4 layers as Base Layer (NBFC-BL), Middle Layer (NBFC-ML), Upper Layer (NBFC-UL), and a possible Top Layer (NBFC-TL) based on the size, activity, etc. 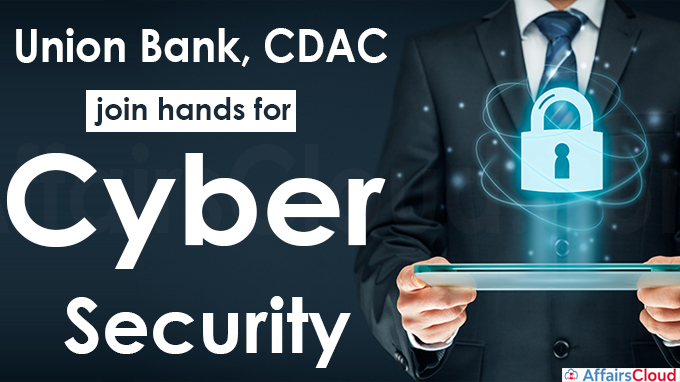 In October 2021, the Union Bank of India (UBI) signed a Memorandum of Understanding (MoU) with Centre for Development of Advanced Computing (C-DAC), Hyderabad to launch a 1st of its kind initiative on Cyber Security awareness.
Aim – CDAC will assist UBI in educating its employees & customers with awareness on Cyber Security & tips to protect themselves from Cyber fraud.
Signatories – The MoU was virtually signed by Rajkiran Rai G, MD & CEO of UBI, and P.R.Lakshmi Eswari, Director of CDAC – Hyderabad.
i.Under this initiative, Online/Offline sessions on Cyber Security Awareness, along with mass Social Media campaigns they will also prepare materials on information security in Audio/Video & Booklet forms.
ii.The Bank has previously launched  an e-book & an online game ‘Spin-N-Learn’, as a part of National Cyber Security Awareness month(October).
About Union Bank of India:
Establishment – 1919
Tagline – Good People to Bank with
MD & CEO – Rajkiran Rai G
Headquarters– Mumbai, Maharashtra
About Centre for Development of Advanced Computing (C-DAC):
Director General– A.K. Nath
Headquarters– Pune, Maharashtra

Dr Rajiv Nigam, Former NIO Scientist Selected for Joseph A. Cushman Award 2022; 1st Indian to be Selected for the Award The selection was made during the Annual Board of Directors meeting of the Foundation held in Portland, Oregon, the United States of America(USA).
The award will be presented at the Cushman Reception at the Geological Society of America(GSA) Connects 2022 which will be held in Denver, Colorado, USA, from 9th to 12th October 2022.
About Joseph A. Cushman Award:
i.Joseph A. Cushman Award(JA Cushman Award) was established by the Cushman Foundation for foraminiferal Research in 1979.
ii.The award honours the researcher’s outstanding contribution in the field of Foraminiferology.
About Dr Rajiv Nigam:
i.Dr Rajiv Nigam joined NIO as science in 1978 and retired as the head of the Geological Oceanography Division and Marine Archaeology Unit of NIO.
ii.He has also served as an Emeritus Scientist at NIO.
Works:
i.He has contributed to the field of Marine Geology (Micropaleontology) using foraminifera as a tool to understand oceanographic processes and their role in environmental and paleoenvironmental assessments.
ii.He has worked on the application of Foraminifera in the field of Marine Archaeology which involves,

“Invest India” Elected As The President Of WAIPA The Defence Research and Development Organisation (DRDO) conducted the successful flight test of the indigenously-designed Abhyas – High-speed Expendable Aerial Target (HEAT) from the Integrated Test Range (ITR) in Chandipur, off the coast of Bay of Bengal in Odisha.
i.ABHYAS is designed and developed by DRDO’s Aeronautical Development Establishment (ADE), Bengaluru.
ii.The aircraft is equipped with MEMS-based Inertial Navigation System (INS) for navigation along with the Flight Control Computer (FCC) for guidance and control.
iii. Abhyas’s radar cross-section (RCS) and its visual and infrared(IR) signatures can be used to simulate a variety of aircraft for air-defense weapon practices.
About DRDO
Headquarters: DRDO bhawan, New Delhi.
Founded: 1958
Secretary, Department of Defence R&D and Chairman, DRDO – Dr G. Satheesh Reddy
>>Read Full News About Aborichthys
i.Aborichthys is an elongate and slender-bodied present in moderate to fast flowing freshwater of mountain streams of the Brahmaputra river system.
ii.It is endemic to the eastern Himalaya. International Snow Leopard Day is annually observed across the globe on 23rd October to create awareness about the snow leopards and promote the conservation of the species and their natural habitat.