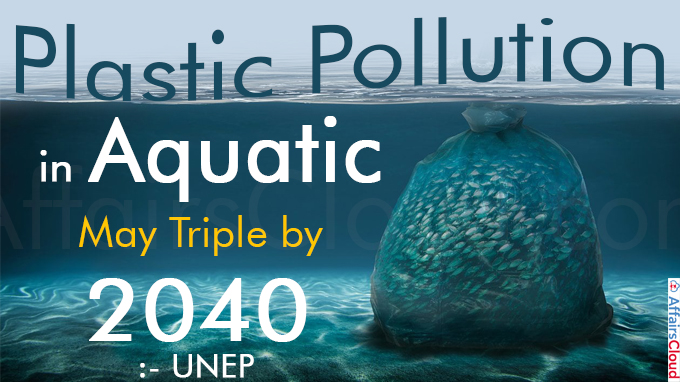 The new comprehensive assessment report titled “From Pollution to Solution: a global assessment of marine litter and plastic pollution” released by the United Nations(UN) Environment Programme (UNEP) has stated that without proper efforts to reduce ocean plastic pollution, the amount of plastic waste entering the aquatic ecosystem is estimated to triple from 9-14 million ton per year in 2016 to 23-37 million ton per year by 2040.

With another approach, plastic pollution is estimated to double from 19-23 million tons in 2016 to around 53 million tons by 2030.

Note: This report will inform the discussion at the 5th session of the UN Environment Assembly(UNEA 5.2) in 2022.

i.It is estimated that the annual loss in the value of plastic packaging waste during sorting and processing is around 80-120 billion USD.

iii.The greenhouse gas emission from plastics is projected to increase from in 2015 were 1.7 gigatonnes of carbon dioxide equivalent (GtCO2e) to around 6.5 GtCO2e by 2050 or 15 per cent of the global carbon budget.

iv.The mismanagement of African and Asian watersheds results in the release of millions of tons of waste plastic into the major terrestrial and aquatic ecosystems and eventually into the oceans.

Some of the key findings of the report:

Threat to marine life: Plastics, the most harmful and persistent fraction of marine litter, accounts to around 85% of total marine waste.

Threat to human life: Human uptake of microplastics through seafood poses a major threat to coastal and indigenous communities.