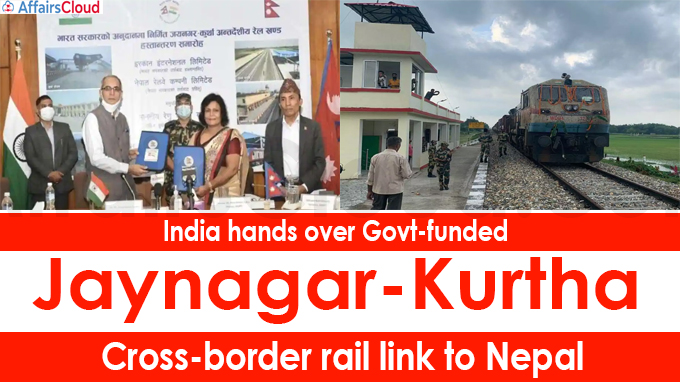 The government of India handed over the Jaynagar-Kurtha, a 34.9km-long cross-border rail link, which connects Jaynagar, Bihar to Kurtha, Nepal, to the government of Nepal.

To enhance the trade and commerce activities along with people to people linkage between India and Nepal.

Vinay Mohan Kwatra, Ambassador of India to Nepal and Renu Kumari Yadav, Minister for Physical Infrastructure and Transport, govt of Nepal were present during the event.

i.The conversion of the 34.9 km narrow gauge section from Jaynagar to Kurtha into broad gauge has been completed under the grant assistance of the Indian government.

ii.8 stations and halts in the Jaynagar-Kurtha section includes the historically important city of Janakpur.

i.Jaynagar-Kurtha is a part of the 68.7 km Jaynagar-Bijalpura-Bardibas rail link built with the financial assistance of NPR 8.77 billion (~Rs 550 crore) from the government of India.

India & Nepal signed a Letter of Exchange (LoE) to revise the 2004 India-Nepal Rail Services Agreement (RSA). The revised agreement will facilitate the import and export of goods through the Indian railway freight services and will come into force from 9th July, 2021.