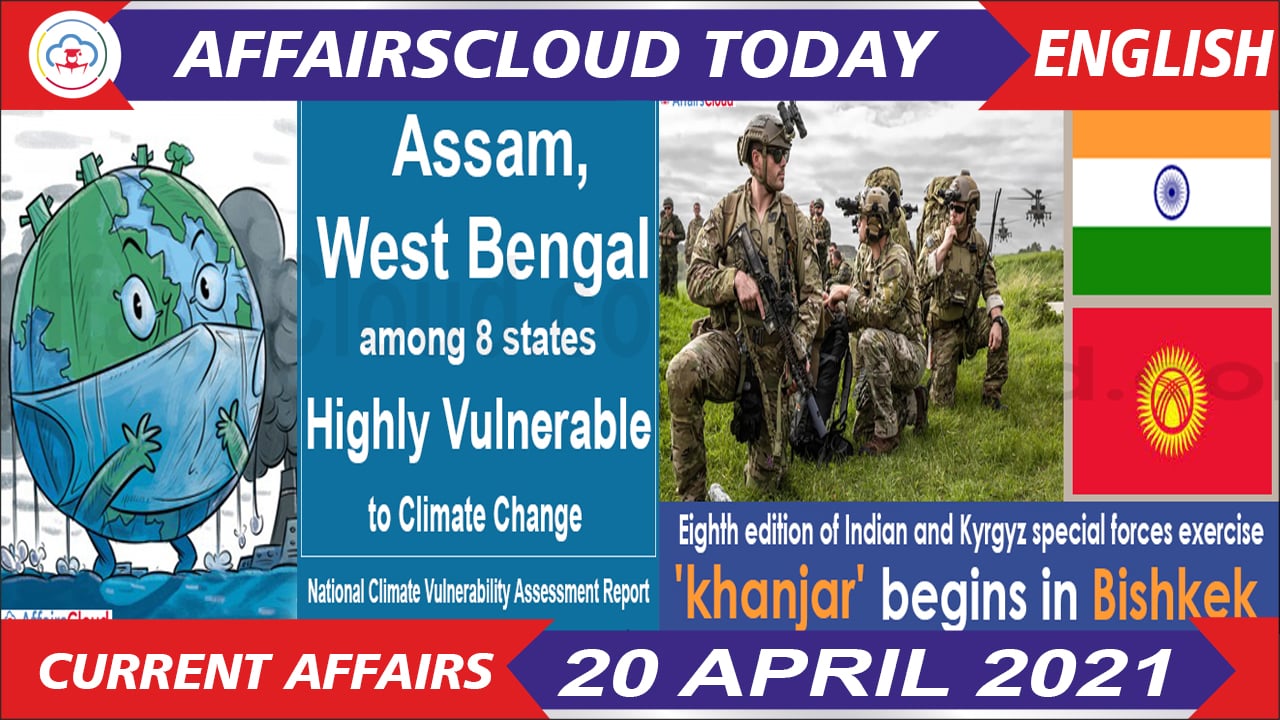 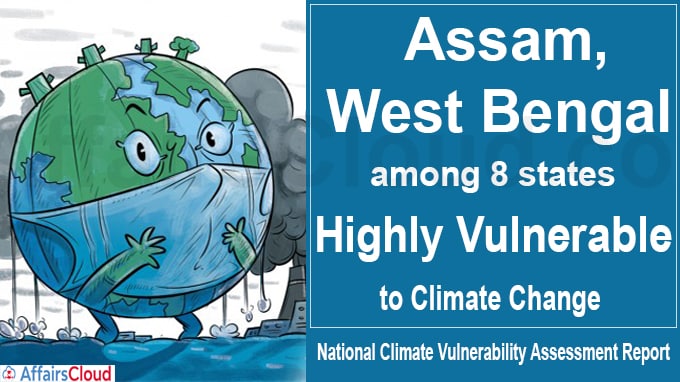 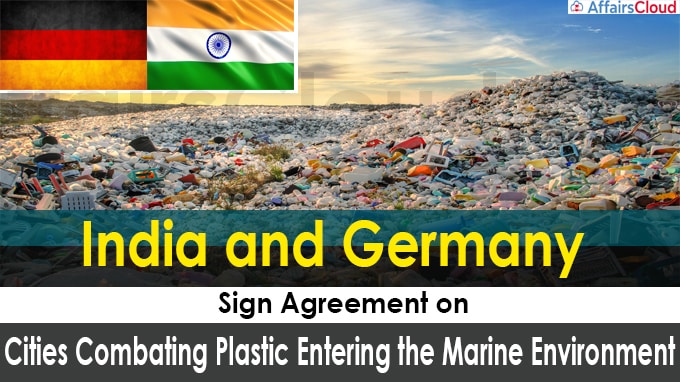 i.On 19th April 2021, the Ministry of Housing and Urban Affairs(MoHUA), Government of India and German Federal Ministry of Environment, Nature Conservation and Nuclear Safety signed an agreement titled “Cities Combating Plastic Entering the Marine Environment” on Technical cooperation over a virtual event in New Delhi.
ii.DeutscheGesellschaftfürInternationaleZusammenarbeit (GIZ) GmbH India signed the agreement on behalf of the government of Germany.
iii.The project is expected to be a collaborative effort under the Indo-German bilateral development corporation on sustainable urban transformation.
iv.This project will be undertaken at national level in selected states (Uttar Pradesh, Kerala and Andaman & Nicobar Islands) and in the cities of Kanpur, Kochi, Port Blair.
v.Project period: three and half years.
About Germany:
President– Frank-Walter Steinmeier
Capital– Berlin
Currency– Euro
>>Read Full News

In April 2021, the finance ministry notified the rules for winding up of the Settlement Commission which handled income tax and wealth tax disputes, effective 1 February 2021. It will be replaced by a new dispute resolution system with assessing taxable income up to Rs 50 lakh and disputed income of up to Rs 10 lakh.
Powers of Settlement Commission – It can grant immunity from prosecution from any income tax or wealth tax related offence and also from imposition of penalty under any central law. India has been ranked 49th out of 120 countries in the ‘Inclusive Internet Index 2021’ released by Economist Intelligence Unit (EIU) in partnership with Facebook. India shares its rank with Thailand. The 8th Edition of India-Kyrgyzstan Joint Special Force Military Exercise, ‘Khanjar’ was inaugurated on April 16, 2021. The exercise is taking place at the Special Forces Brigade of National Guards of Kyrgyz Republic in Bishkek, Capital of Kyrgyzstan.

Outstanding IHLs: The total outstanding IHLs of HFCs and banks combined was around Rs 20-lakh crore at the end of March 2019-20 compared to around Rs 18-lakh crore in 2018-19 and it has a year-on-year growth of 8.5 per cent.
About National Housing Bank(NHB):
Establishment –  July 9, 1988 under the National Housing Bank Act, 1987.
Headquarters– New Delhi
Managing Director – Sarada Kumar Hota
>>Read Full News 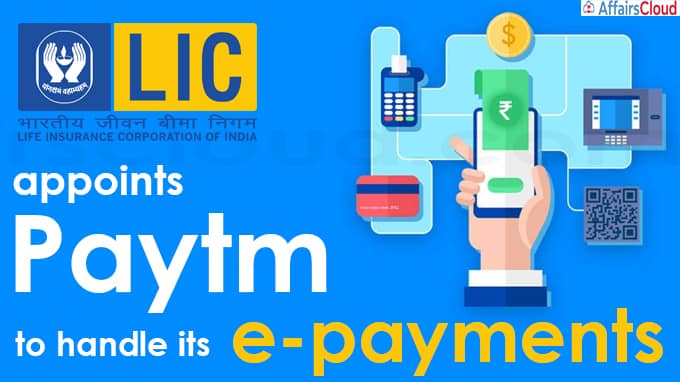 Rs 4.04 crore has been stolen by a private security guard from the Currency chest of Axis Bank in Chandigarh’s Sector 34. It is the first time in Chandigarh where such a huge amount was stolen from inside a bank.
What is a Currency chest?
It is a depositary of the Reserve Bank of India (RBI), in which it stocks the money meant for banks and ATMs. Whenever, RBI prints new currency notes, first it delivers to currency chests and then currency chests deliver these new currency notes to banks. They are usually situated on the premises of different banks but administered by the RBI. 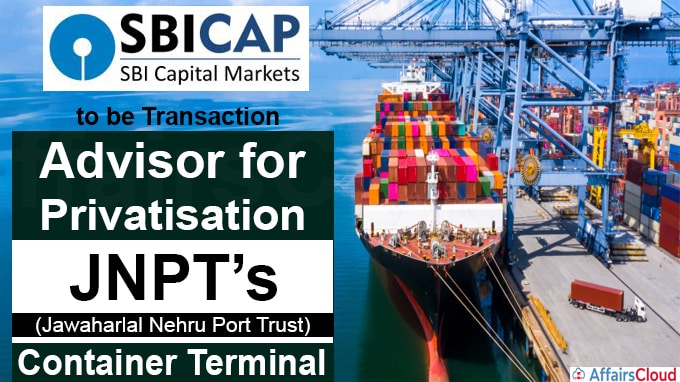 Jawaharlal Nehru Port Trust (JNPT) has hired SBI Capital Markets Ltd. (SBI Caps), subsidiary of State Bank of India (SBI) to act as transaction advisor for the privatization of the J N Port Container Terminal (JNPCT).
Background:
JNPT has planned to privatize the JNPCT through the public-private-partnership (PPP) route in December 2020, and it was evaluated by the standing finance committee(SFC) in the ministry of ports, shipping, and waterways(MoPSW).
SBI Caps as the transaction advisor: Amazon India has organized the second edition of its annual summit called ‘Amazon Smbhav Summit 2021’ virtually from April 15 to 18, 2021. In which Amazon has launched a $250million Amazon Smbhav Venture Fund to support the digitization of small and medium businesses (SMBs), Agriculture, and Healthcare in India. The Association for Computing Machinery (ACM) has named  Alfred VainoAho and Jeffrey David Ullman as the recipients of the 2020 ACM A.M. Turing Award. The award was presented to them for fundamental algorithms and theory on programming language implementation.The award is also referred to as the Nobel Prize of Computing.

Note – To commemorate the birth anniversary of Alan Turing on June 23, 2021, the Government of England will release 50-pound (£50) note with Alan Turing Face.

About the 2020 Laureates:
i.Alfred VainoAho is the Lawrence Gussman Professor Emeritus of Computer Science at Columbia University
ii.Jeffrey David Ullman is the Stanford W. Ascherman Professor Emeritus of Computer Science at Stanford University.
Collaboration of Aho and Ullman:
i.Aho and Ullman worked at the Bell Labs from 1967 to 1969 and collaborated in the initial ideas on algorithms design and analysis, formal languages, compilers and databases which contributed to the development of the current programming and software landscape.
ii.Alfred VainoAho and Jeffrey David Ullman have co-authored 9 influential books.
iii.The most popular books include, The Design and Analysis of Computer Algorithms (1974)(co-authored by Aho, Ullman, and John Hopcroft) and Principles of Compiler Design (1977).
About ACM A.M. Turing Awards:
i.The A.M. Turing Award, named in honour of Alan Mathison Turing, a British mathematician and computer scientist, is the most prestigious technical award instituted by ACM in 1966.
ii.The award recognises the major contributions of lasting importance to computing.
iii.The award carries a prize money of USD 1 million with financial support provided by Google, Inc.
Note:
The first recipient of the AM Turing Award in 1966 was Alan J Perlis (American) who wrote the compiler for ALGOL computer programming language. 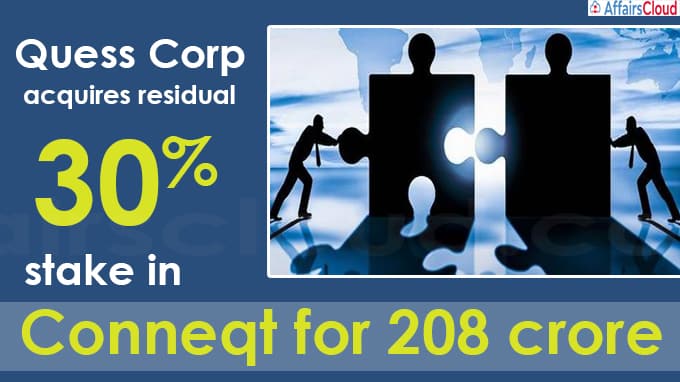 Bangalore based Business Services Provider Quess Corporation is set to acquire the remaining 30% equity stake in Conneqt Business Solutions Ltd from Tata Sons Pvt Ltd for INR 208 Crore. With this transaction, Conneqt will become a wholly-owned subsidiary of Quess Corporation.
i.Quess had acquired 51% of Conneqt in 2017, and further increased its stake in Conneqt from 51% to 70% in May 2019 (through infusion of primary capital).

Iran launched IR-6 Uranium Enrichment centrifuges in Natanz as a part of its National Day of Nuclear Technology (10th April 2021) event held in Tehran and other nuclear sites of Iran. Hassan Rouhani, President of Iran inaugurated the 3 cascades of 164 IR-6 semi industrial centrifuges, 30 IR-6S centrifuges and 30 IR-6 devices at the uranium enrichment plant in Natanz, Iran. On 18th April 2021,the former Chief Minister(CM) of Assam Bhumidhar Barman passed away in Guwahati,Assam due to prolonged illness.He was 91.He was born on 12th October 1931 in Nalbari,Assam.
About Bhumidhar Barman:
i.Bhumidhar Barman had served as CM of Assam twice.His first term was between April 22, 1996 to May 14,1996 and second term was during 2010.During both periods he acted as an interim CM
ii.He belonged to Indian National Congress(INC) and had also represented the Barkhetry Constituency.
iii.He served as the Member of Legislative assembly for a period of 7 years and had also held important portfolios like health,education and revenue. 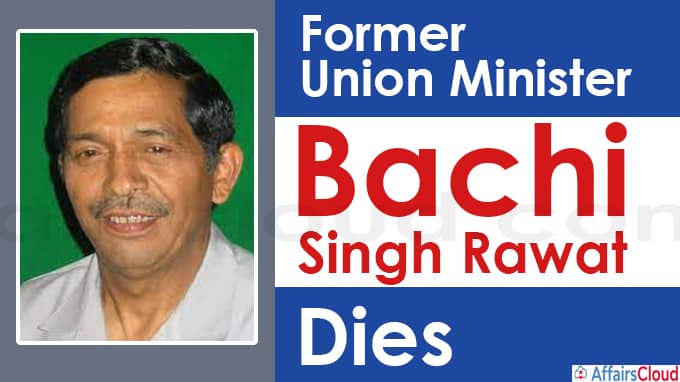 On 18th April 2021,former Union Minister Bachi Singh Rawat passed away at All India Institute of Medical Science(AIIMS),Rishikesh after suffering breathing problem.He was 71.He was born on 1st August 1949 at Almora,Uttarakhand.
About Bachi Singh:
i.Bachi Singh served as the Union Minister of state for science and technology in the Atal Bihari Vajpayee Government between 1999-2004.
ii.He belong to Bharatiya Janata Party (BJP).He was elected as Member of Parliament (MP) from the Almora for four times.

New Book: “Wanderers, Kings, Merchants: The Story of India through its Languages” by  Peggy Mohan 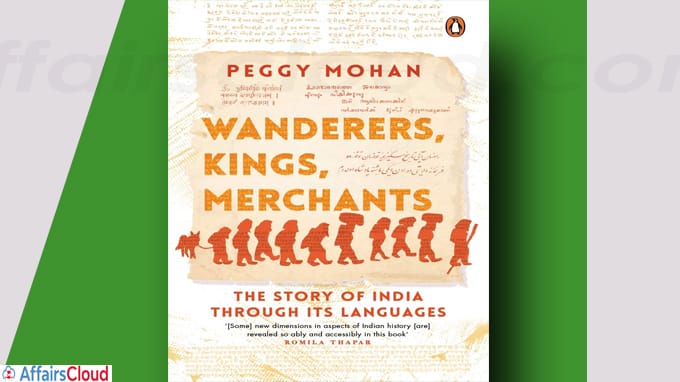 Noted Linguist Peggy Mohan has authored a new book titled “Wanderers, Kings, Merchants: The Story of India through its Languages”. The book explores the impacts of migration on Indians and Indian languages from ancient times through the early history of South Asia.
The book was published by Penguin Random House India.
About the book:
i.The book argues that all Indians are of Mixed origins, through the inclusive study of languages like the story of early Sanskrit, the rise of Urdu, language formation in the North east.
ii.The book connects linguistics and history to explore the migration impacts on communication language.
About Peggy Mohan:
i.Peggy Mohan has taught linguistics at Jawaharlal Nehru University and JamiaMilliaIslamia, among other centres.
ii.She has authored 3 novels: ‘Jahajin’, ‘Walk in C-Minor’ and ‘The Youngest Suspect’. 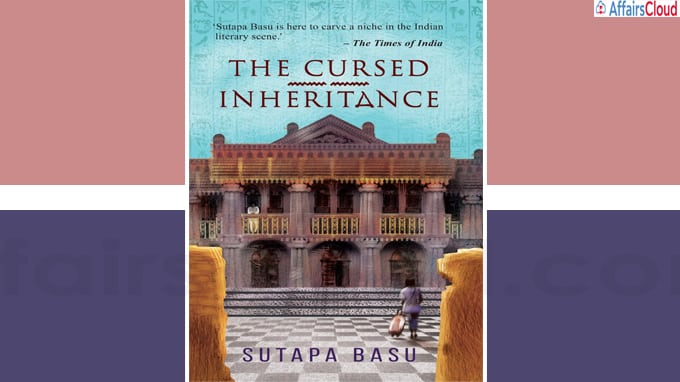 Sutapa Basu the winner of JK Papers AutHer Awards 2020 has authored a new mystery novel titled “The Cursed Inheritance”. The book contributes toward the importance of the conservation of heritage through the stories.
The book is published by Readomania Publishing.

About Sutapa Basu:
Sutapa Basu is the director of Learning Solutions at Eupheus Learning.
She won the AutHER award for Best Fiction 2020 instituted by Times of India and JK Papers for her book “The Curse of Nader Shah”.
Other books: 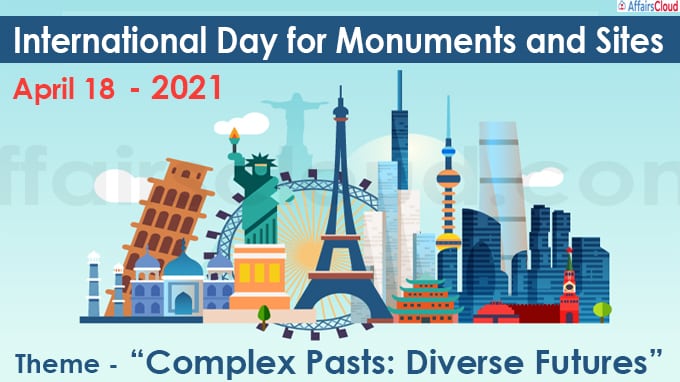 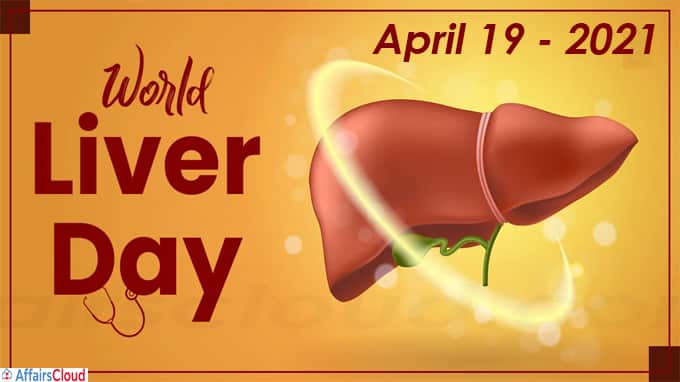 i.World Liver Day is annually observed across the globe on 19th April to create awareness about the importance of liver and liver related diseases. The day aims to inform the general public about liver infections and to provide timely treatment for the preventable illness.
ii.The Ministry of Health and Family Welfare has launched the National Viral Hepatitis Control Program in July 2018.
iii.According to the World Health Organisation(WHO), Liver Diseases are the 10th most common cause of death in India.
>>Read Full News