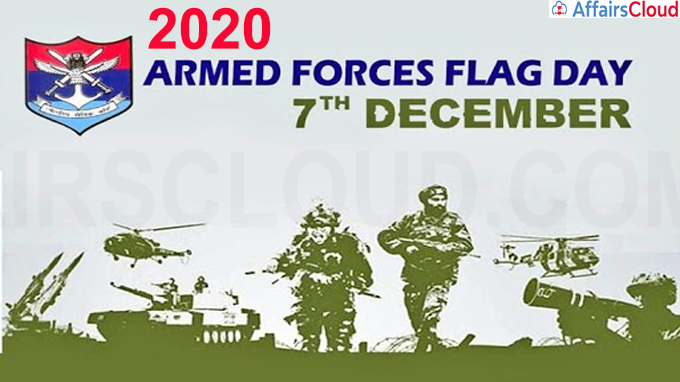 The Armed Forces Flag Day is annually observed across India on 7th December to honour the martyrs and the men and women in uniform who protects the honour of the country.

The Government of India has decided that December 2020 will be celebrated as the “Gaurav Maah” (Pride Month) to honour the contributions of armed forces and its veterans.

On 28th August 1949, The Government of India proclaimed the 7th December as the Flag Day, based on the recommendation of the committee under the Defense minister

ii.He stated that the Defense sector of India which was outside the limits of the private sector is now open to Indian Private sector.

iii.He noted that the contribution of the Indian industry through CSR has increased the Armed Forces Flag Day Fund(AFFDF).

iv.The corporate contribution to the AFFDF, fulfills the CSR obligation under section 135 of Companies Act, 2013.

ii.The fund is managed by the Kendriya Sainik Board (KSB), under the Ministry of Defence.

i.The Armed Forces Flag Day Fund (AFFDF) was constituted by the Government of India to support the welfare and rehabilitation of Ex-servicemen (ESM) community.

ii.The fund will be used to support more than 32 lakh ESM.

Every year more than 60000 ESM are added due to early superannuation.

The donations for the AFFDF can be made online through http://ksb.gov.in/DonateAFFDF.htm

i.Rajya/Zila Sainik Boards are responsible for the formulation of policy and implementation of resettlement and welfare schemes for ex-servicemen, widows and their dependents in the respective states, Union Territories or districts.