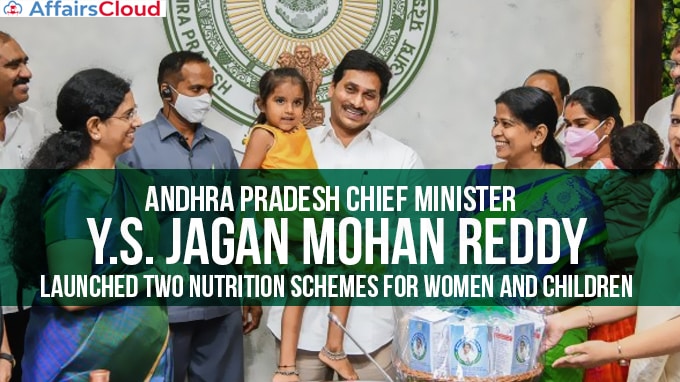 ii.These two schemes will benefit around 30.16 lakh mothers and children of the below poverty line (BPL) families.

i.Under these schemes, the government of Andhra Pradesh will spend around Rs.1863 crore per annum to provide nutritious food to the women and children, with an expenditure of Rs.1100 per month for every beneficiary.

ii.The Department of Women Development and Child Welfare had developed a mobile app – YSR Sampoorna Poshana App, to ensure effective implementation and monitoring of the schemes and to assess the delivery and satisfactory level of the beneficiaries.

iv.Under these schemes “Take Home Nutrition Kit” with nutritious foods are provided to the women and children.

The government of Andhra Pradesh reintroduced free power into the agriculture energy supply scheme – Agriculture Electricity Cash Transfer Scheme which was announced on 1st September 2020 and renamed it as “YSR Free Agriculture Power”. This scheme will be implemented in a new form from the next Financial year.

On pilot basis this scheme will commence in Srikakulam from September 2020.

The monthly Direct Benefit Transfer(DBT) amount for the Srikakulam will be transferred by the government to the AP Eastern Power Distribution Company against the farmers’ account.

i.Under this scheme the government will install smart meters to the agricultural power supply to implement the central reform to implement a 2% hike in Fiscal Responsibility and Budget Management Act (FRBM Act) borrowing limit.

ii.This hike will entitle an additional loan of Rs.20000 crores to the state in the current fiscal.