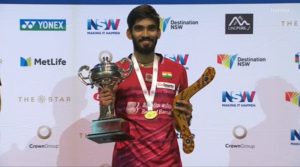 On October 26, 2017, India’s Saina Nehwal exited from French Open after losing out to Japanese World No.5 Akane Yamaguchi.