On October 26, 2017, Aruna Sundararajan, Secretary, Department of Telecommunications announced that first phase of the Bharat Net project (National Optic Fibre Network) will be completed by December 2017, and will thereby provide internet access to 100000 gram panchayats across India. 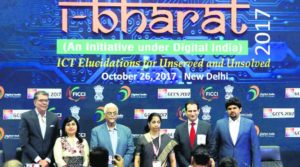