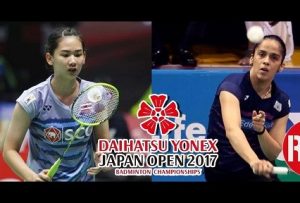 i.Carolina Marin of Spain defeated He Bingjiao of China by 23-21, 21-12 in the women’s singles final.

i.Marcus Fernaldi Gideon and Kevin Sanjaya Sukamuljo of Indonesia defeated Takuto Inoue and Yuki Kaneko of Japan by 21-12 21-15 in the men’s doubles final.

PV Sindhu and Saina Nehwal crashed out in second round:

i.Japan’s Nozomi Okuhara defeated India’s PV Sindhu by 21-18, 21-8 in the second round of women’s singles.

ii.Spain’s Carolina Marin defeated India’s Saina Nehwal by 21-16, 21-13 in the second round of women’s singles.