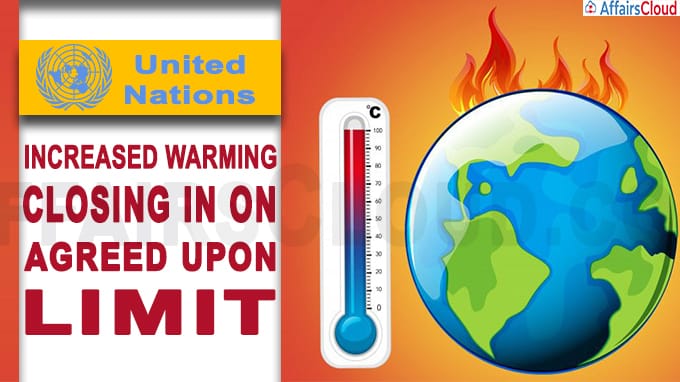 As per the United in Science 2020 report, the second in a series highlighted that the world is nearing to pass the temperature limit set by global leaders 5 years ago and may exceed it in the next decade or so. In the next 5 year, the world has about a 1-in-4 chance to experience a year that is hot enough to keep the global temperature at 2.7 degrees (1.5 °C-degrees Celsius) above pre-industrial times.

ii.It highlighted the wildfires in the Amazon, the Arctic and Australia. The heat waves and drought predominantly  increased the risk of wildfires.

iii.In 2020, there will be reduction by 4% to 7%  in the Carbon dioxide emission, as there was minimal  travel and industrial activities during the coronavirus pandemic.

iv.Total reduction in emissions in 2020 paves way to a small reduction in the annual increase of the atmospheric concentrations of long-lived greenhouse gases.

Note– As per the 2018 UN science report, a world hotter than that still survives, but the risk of serious problems is greatly increased.

The report is a multi-organization high-level compilation of the latest climate science information.

It has been compiled by the World Meteorological Organization (WMO) , with input from the Global Carbon Project, UNESCO Intergovernmental Oceanographic Commission (UNESCO-IOC), Intergovernmental Panel on Climate Change (IPCC), UN Environment Programme (UNEP) and the Met Office.

By combining energy efficiency improvements with the transition away from super-polluting refrigerants, the world can avoid cumulative greenhouse gas emissions of between 210- 460 gigatonnes of carbon dioxide equivalent(GtCO2e) over the next four decades. This equals 4-8 years(roughly) of total annual global greenhouse gas emissions, based on 2018 levels.