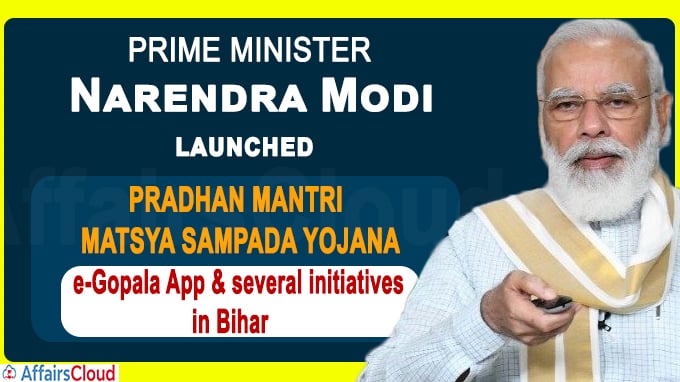 Objective of launch :- To improve our villages and make our country self-reliant (Atmanirbar Bharat) in the 21st century.

i.The Pradhan Mantri Matsya Sampada Yojana (PMMSY) is a flagship scheme focused on sustainable development of fisheries sector in the country with an estimated investment of Rs. 20,050 crores for its implementation during a period of 5 years from FY 2020-21 to FY 2024-25 in all States/Union Territories.

ii.The investment under PMMSY is the highest ever in the fisheries sector.

iii.An investment of about Rs 12340 crores is proposed for beneficiary-oriented activities in Marine, Inland fisheries and Aquaculture and about Rs 7710 crores investment for Fisheries Infrastructure.

iv.Scheme will provide new infrastructure, modern equipment and new markets to Fish Producers. The main Goal is to double the Fish Exports in the next 3 to 4 years.

v.It is being launched in 21 States of the country with an investment of Rs 20,000 Crores which would be spent in the next 4-5 Years. Under this scheme many facilities have been inaugurated in Patna, Purnea, Sitamarhi, Madhepura, Kishanganj and Samastipur.

i.PMMSY is expected to enhance fish production by an additional 70 lakh tonne by 2024-25, increasing fisheries export earnings to Rs.1,00,000 crores by 2024-25, doubling the incomes of fishers and fish farmers.

ii.It will also reduce post-harvest losses from 20-25% to about 10% and generate an additional 55 lakhs direct and indirect gainful employment opportunities in fisheries sector and allied activities.

iii.PMMSY scheme primarily focuses on adopting ‘Cluster or Area based approaches’ and creation of Fisheries clusters through backward and forward linkages.

iv.Special focus will be given for employment generation activities such as seaweed and ornamental fish cultivation.

v.Under PMMSY, the Department of Fisheries has approved Rs 1723 crores worth of proposals for 21 States/UTs in Phase-I and priority is given to revenue generating activities under PMMSY.

i.PMMSY in Bihar will provide an investment of Rs.1390 crore with a Central Share of Rs. 535 crores and the additional fish production target is 3 lakh tons.

ii.During the current financial year (2020-21), Government of India has sanctioned the proposal of Government of Bihar at a total project cost of Rs.107.00 crore for major components like establishment of Recirculatory Aquaculture System (RAS), construction of Biofloc ponds for aquaculture, finfish hatcheries, construction of new ponds for aquaculture, support services (Matsya Seva Kendra), and establishment of a Brood Bank.

i.Establishment of Fish Brood Bank at Sitamarhi, and of Aquatic Disease Referral Laboratory at Kishanganj, under assistance of PMMSY.

ii.This will help in enhancing production and productivity of fish by ensuring timely availability of quality and affordable fish seed for the fish farmers and address the need for disease diagnosis as well as water and soil testing facilities.

ii.The Center will have facilities for Seed production technology and demonstration unit technology for fish, referral laboratory and diagnostic testing, it will facilitate in boosting fish production and assist in capacity building of fish farmers.

i.e-Gopala App is a comprehensive breed improvement marketplace and information portal for direct use of farmers.

ii.e-Gopala app will be an online digital medium that will help the farmers to choose better quality livestock and get freedom from middlemen.

iii.There is no mechanism to send alerts (on due date for vaccination, pregnancy diagnosis, calving etc) and inform farmers about various government schemes and campaigns in the area.

iv.The app will give all the information related to cattle care, from productivity to health and diet.

v.By inserting the animal Aadhaar number in the e-GOPALA app will give all the information related to that animal easily, which will make it easier for cattle owners to buy and sell animals.

i.PM inaugurated Semen Station with state of the art facilities, which has been established under Rashtriya Gokul Mission in Purnea, Bihar with an investment of Rs 84.27 crores on 75 acres of land made available by the State Government of Bihar.

ii.It is one of the largest semen stations in the government sector with production capacity of 50 lakh semen doses per annum.

iii.It will give a new dimension to development and conservation of indigenous breeds of Bihar and meet demand of semen doses of eastern and north eastern States.

ii.A total of 30 Embryo Transfer Technology (ETT) and IVF laboratories are being set up across the country through 100% grant in aid.

iii.These labs will be crucial for propagating elite animals of indigenous breeds and thereby enhancing milk production and productivity manifold.

i.PM launched use of sex sorted semen in artificial insemination under Rashtriya Gokul Mission by Baroni Milk Union in Begusarai district of Bihar.

ii.Using sex sorted semen in Artificial Insemination, only female calves can be produced with more than 90% accuracy. This will help double the growth rate of milk production in the country.

iii.It will propagate technology for multiplication of high yielding animals at a faster rate through use of technology so they can give birth to 20 calves in a year.

i.Mission Gokul to develop indigenous breeds in the country. A countrywide artificial insemination program was started in 2019.

Modern Facilities have been built in Purnia, Patna and Barauni under National Gokul Mission.

ii.The center built in Purnia is one of the largest centers in India and will benefit a large part of Eastern India.

iii.The center will give further boost to the development and conservation of indigenous breeds of Bihar like ‘Bachaur‘ and ‘Red Purnia‘.

i.Launched during August 15, 2020, to give an impetus to the conservation efforts of the species by taking measures for its protection including sustainable fishing with scientific methods. Mission Dolphin will also have its impact on the fisheries sector.

i.A cluster of food processing industries and research centers to be set up near villages to achieve the motto “Jai Kisan, Jai Vigyan and Jai Anusandhan”.

i.Bihar State Pollution Control Board (BSPCB) has signed a Memorandum of Agreement (MoA) with Indian Institute of Technology (IIT), Delhi to set up a Geographical Information System (GIS) based platform for air quality management in Bihar.

About Project Tiger:-
It was launched during the tenure of Prime Minister Indira Gandhi in April 1973, Project Tiger is a tiger conservation programme by the Government of India.The Project aims to increase the number of Tigers in India. Kailash Sankhala was the first director of Project Tiger.

About Project Elephant:-
It was launched in 1992 by the Government of India Ministry of Environment and Forests to provide financial and technical support to wildlife management efforts by states for their free-ranging populations of wild Asian Elephants.