On January 21, 2020 As per a survey conducted by World Breastfeeding Trends Initiative (WBTi) 2020, Sri Lanka ranked 1st out of 97 surveyed countries in supporting breastfeeding women and achieved the status of being the first-ever green nation in supporting them. On the other hand, India ranked 78th with a score of 45.0 and got yellow colour code and Libya ranked last (97th) with red colour code. The status has been awarded based on its performance on 10 indicators which WBTi uses to color-code the countries. The survey report in brief are as follows: 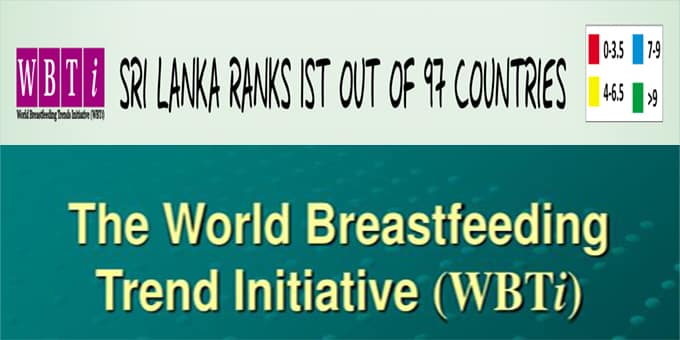 i.color-codes: There are 4 color codes based on which countries are ranked. The ascending order of performance of the colors are red, yellow, blue and green.

iii.WBTi development:  The Breastfeeding Promotion Network of India in New Delhi developed the WBTi. As of now, 120 countries have been involved in the WBTi. WBTi also assists countries in assessment and also calls for action to bridge the gaps.

iv.Breastfeeding advantages:  It prevents non -communicable diseases and improves child health. Globally 41% of infants of 0-6 months are breastfed. The World Health Assembly (WHA) has also set a target to reach 50% from the current 41% by 2025.

v.Breastfeeding period: The World Health Organisation (WHO) along with United Nations International Children’s Emergency Fund (UNICEF) recommends breastfeeding to be provided to children exclusively for 6 months along with adequate foods till 2 years or beyond.