On January 19, 2020 the World Economic Forum (WEF) in collaboration with PwC released a report titled “Nature Risk Rising: Why the Crisis Engulfing Nature Matters for Business and the Economy”. The report is the 1st in a series for the New Nature Economy(NNE). As per the report, global businesses are more than dependent on nature with an estimated exposure of $44 trillion which is half of world GDP (Gross Domestic Product). 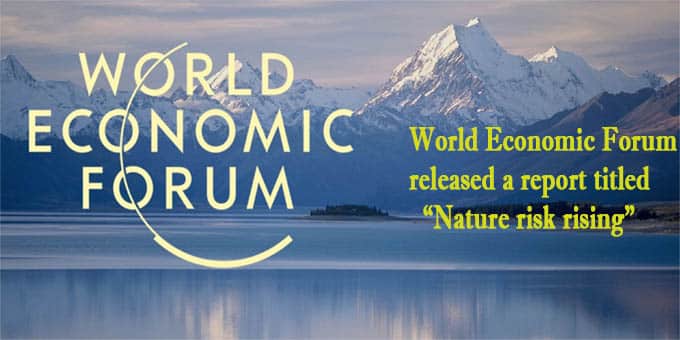 The report in detail are as follows:

i.Threat to plants & animals: 25% of the assessed plant & animal species are in threat due to human actions. Nearly a million species are to face extinction within decades. Human activities have severely altered 75% of land and 66% of marine environments too.

iii.Resources relied on by industries: 163 industry sectors have analysed that the GDP is highly dependent on nature and its services. Pollination, water quality and disease control are three examples of the services provided by an ecosystem.

iv.Framework adoption: The WEF has already adopted a framework proposed by the Financial Stability Board’s Task Force on Climate-related Financial Disclosures (TCFD) to identify, measure and manage climate risks which could be used to manage the nature risks. Click here to know more.