On January 20, 2020,According to the ‘World Employment and Social Outlook: Trends 2020 (WESO)’ report released by the United Nations (UN)’ International Labour Organisation (ILO), the global unemployment figure is projected to increase by about 2.5 million in 2020.
The report noted that nearly half a billion people around the world are not getting enough paid work. 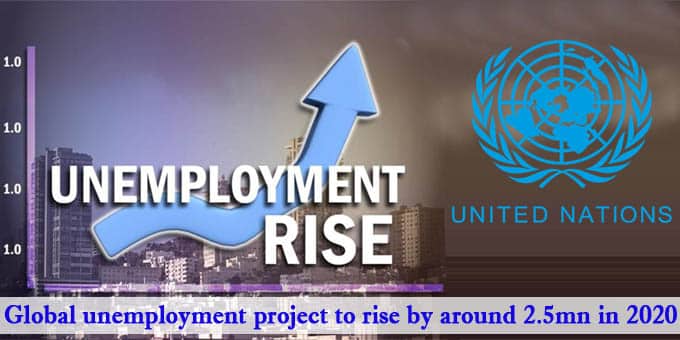 Key facts related to the report:

i.Global unemployment was stable for the last 9 years but as global economic growth is slowing down and the number of workers is increasing, in that proportion new jobs are not being created in the market.

iii.Around 267 million people (between the age group of 15-24 yers) are not in employment, training or education.

iv.Reason: The global economic slowdown is a major cause of rising unemployment in the world.

v.With increasing unemployment and inequality continuing, lack of better work has made it even more difficult for people to live better lives through their work.

vi.As per the data released by think-tank Centre for Monitoring Indian Economy (CMIE) the unemployment rate among the youth of 20 to 24 years is 37 %. It is clear from the report that developed countries are experiencing slow growth. As a result, new jobs are not being created in sufficient quantity to harness the growing labor force.

vii.Working poverty: According to the ILO report, people with incomes below US $ 3.20 per day are considered as poverty-stricken people. Currently working poverty affects more than 630 million people or one in five people in the working population globally.

About International Labor Organization (ILO):
Formation– 29 October 1919
Headquarters– Geneva, Switzerland
Director-General– Guy Ryder
It is a specialized body of the United Nations (UN). Presently 187 countries are members of this organization. This organization was awarded the Nobel Prize for World Peace in 1969.