The Corruption Perception Index 2019 was released by Transparency International. As per the Index India ranks 80 out of 180 countries with a score of 41 out of 100. Last year India’s rank was 78 with the same score. The list was topped by Denmark and New Zealand. 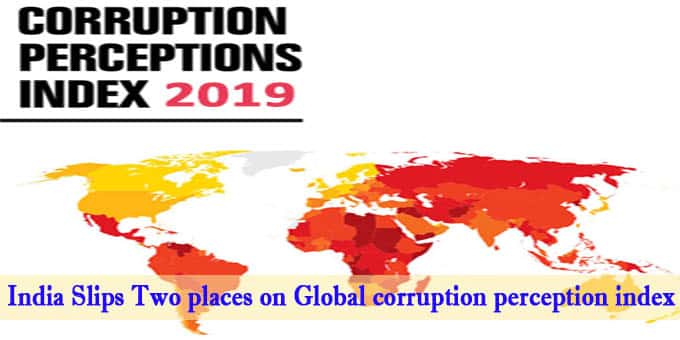 iii.Pakistan ranked 120th in the list along with Moldova & Niger whereas China ranked 80th along with India, Benin, Ghana, Morocco among the 180 countries.

iv.United States of America (USA) ranks 23rd with a score of 69.

v.According to the report, in the last eight years only 22 countries significantly improved their CPI scores, including Greece, Guyana and Estonia where as 21 countries have showed significant decreased in the CPI scores.The global average score is 43 and 2/3 of countries score below 50.

i.In Asia Pacific region, New Zealand tops the list whereas Afghanistan bottoms the list with a score of 16.

v.Sub-Saharan African region is the  lowest-scoring region on the CPI, with an average of 32. In this region Seychelles tops the list whereas Somalia bottoms the list.