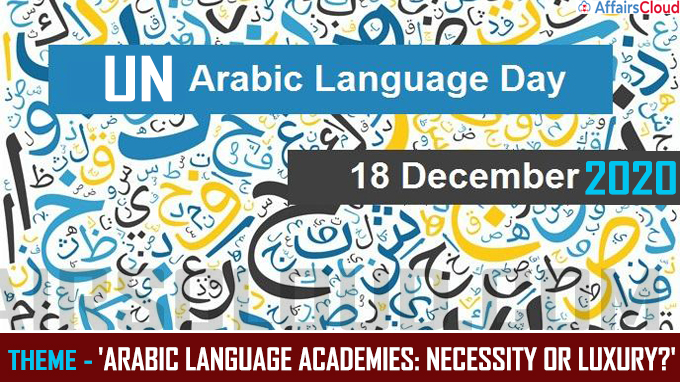 The United Nations(UN)’s World Arabic Language Day is annually celebrated across the world on 18th December to create and spread awareness about the history, culture and development of Arabic language. The day provides an opportunity to celebrate the richness and global significance of Arabic language which is one of the oldest and most widely spoken languages in the world.

The theme of the World Arabic Language Day 2020 is “Arabic Language Academies: Necessity or Luxury?” with a focus on how the language academics can be empowered to enhance and revive the use of classical Arabic.

i.The 2020 World Arabic Language day focuses the concerns on the decreasing use of classic Arabic and increasing number in the use of local Arabic dialects.

i.On the Eve of the celebration of International Mother Language Day, the United Nations Department of Global Communication, formerly known as the Department of Public Information adopted the resolution to designate a day to celebrate each of the 6 official languages of the UN.

The 18th December was chosen to mark the day in 1973 on which the UN General Assembly adopted the resolution A/RES/3190(XXVIII), on the inclusion of the Arabic language as the official and working language of the UN.

i.Because of the diverse forms of Arabic language- classic or dialect, from oral expression to poetic calligraphy, it has produced fascinating aesthetics in the field of architecture, poetry, philosophy and songs.

i.The events to celebrate the Arabic Language day are organised by UNESCO in cooperation with the Permanent Delegation of the Kingdom of Saudi Arabia and the Sultan Bin Abdulaziz Al-Saud Foundation.

ii.As a part of the celebration of Arabic language day, virtual discussion events were organised, which will be led by Mrs. Lina Saleh, the journalist and editor of cultural programs on France 24 TV.