On January 20, 2020 the World Economic Forum (WEF) released 1st edition of a report titled “The Global Social Mobility Report 2020: Equality, Opportunity and a New Economic Imperative”. The global social mobility index (GSMI) of 82 countries were launched in this report. As per the Index, India ranked at the 76th position with a score of 42.7while Denmark topped the list. The key findings in the report are as follows: 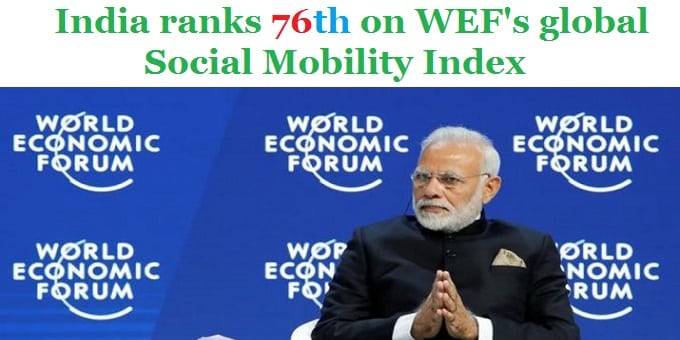 i.India is among the 5 countries namely China, the United States(US), Japan and Germany which stands to gain most from boosting social mobility score.

ii.India ranks 41st in lifelong learning while it ranks 53rd in working conditions. It has the second-highest level of workers in vulnerable employment behind Saudi Arabia.

v.Most to gain economy: As per the analysis the economy with the most to gain is China, whose economy could grow by an extra $103 billion per annum, or $1 trillion dollars over the decade.

vi.Economy boosting by 2030: The WEF has found that by increasing social mobility by 10% would benefit social cohesion and also by 2030, the world’s economies will be boosted by nearly 5%. US would make the 2nd-largest gains, at $87 billion a year followed by India, followed by Japan, Germany, Russia, Indonesia, Brazil, the UK and France.

viii.Social mobility:  It is a movement in personal circumstances either “upwards” or “downwards” of an individual in relation to those of their parents. It can also be explained as the ability of a child to experience a better life than their parents. On the other hand, relative social mobility means assessment of the impact of socio-economic background on an individual’s outcomes in life. Click here to know more.