On January 12, 2020, In a major step to avoid fiscal downfall, the central Government has decided to reduce wasteful expenditure on items such as travel, food and conferences by 20%.
The decision was taken in a meeting of the newly- formed Cabinet Committee on Investment and Growth (CCIG) chaired by Prime Minister (PM) Narendra Modi with the members Home Minister Amit Shah, Finance Minister Nirmala Sitharaman, Defence Minister Rajnath Singh, Road Transport and Highways Minister Nitin Gadkari, and Railways Minister Piyush Goyal. 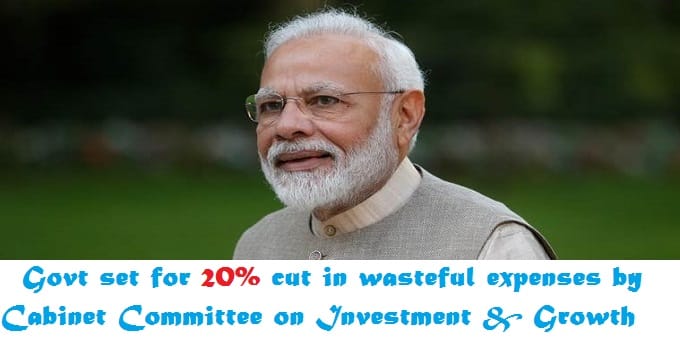 i.All the ministers have been instructed to cut their unruly journeys, meals and conferences by up to20%. CCIG has also asked the Department of Expenditure of the Ministry of Finance to take necessary action in this regard.This can also be attributed to the decrease in revenue in the financial year.

ii.This is not the first time the government has adopted to such measures to cut spending. In October 2014, the Department of Expenditure directed to cut non-essential expenses by up to 10%

iii.The move aims to avoid fiscal slippage by comprising non-development expenditure and controlling fiscal deficit within the level of budgeted target of 3.3% for financial year -FY 2019-20.

iv.The government has reduced the spending limit from 33 % to 25 % in this quarter (January-March,2020), along with the expenditure of ministries.
It is noteworthy that the GDP growth rate is expected to be at a record 11-year low of 5% in the current financial year 2019-20 and with which it has become more challenging to keep the fiscal situation stable before the government.