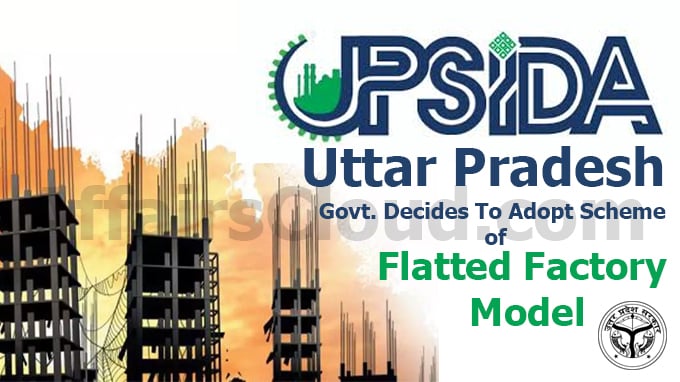 On 11th June 2020, The Uttar Pradesh State Industrial Development Authority (UPSIDA) of the Government of Uttar Pradesh decided to adopt the scheme of Flatted Factory Model, to ensure the availability of industrial land which means that non-polluting industries can operate in Multistoried buildings.

i.This model enables the owners of the industrial plot to develop 1/4th of the land as a flatted factory.

ii.This model allows only the non-polluting units like the manufacturing of readymade garments, handicrafts etc which are approved by the industrial development authority.

iii.The policy supports the sick industrial unit (existing for 5 or more years with losses exceeding total net worth) to propose a joint venture with an interested company.

iv.This policy does not allow the conversion in residential or mixed land use areas.

i.The committee has set 5 acres as the minimum land requirement.

ii.The model permits the structure of minimum 4 storeys including the ground flood to be converted as a flatted Factory.

iii.Maximum plot area proposed for sub‐division and buy back shall not be more than 50% of originally allotted plot area & the minimum area proposed for sub‐division shouldn’t be less than 1000 square meter (sq m) with minimum constructed area according to the by-laws, provided that the division is functional and under production for at least 5 years prior to the application

i.This will reduce the rate of import and support the state to become self-reliant and contribute development in the industrial sector.

ii.The adaptation of this model by the IT, electronics, garments etc. sectors will provide space for the industries like define and automobiles.

The concerned development authority approves the proposal for the conversion of a unit into a flatted factory.