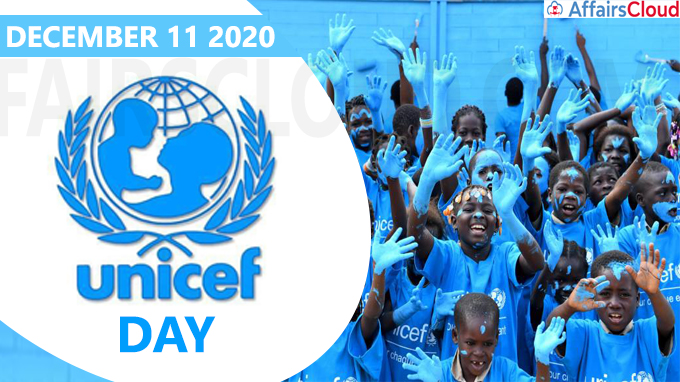 The year 2020 marks the 74th anniversary of the foundation of UNICEF.

ii.The mandate of UNICEF was broadened to address the long term needs of the children and women in the developing countries and in 1953, the UNICEF became the permanent part of the UN system during which the name was shortened as “United Nations Children’s Fund” but UNICEF retained its original acronym.

i.UNICEF covers around 190 countries across the globe and it aims to save children’s lives, defend their rights and help them to fulfill their potential for early childhood to adolescence.

ii.UNICEF supports the child’s health and nutrition, safe water and sanitation, quality education and skill building, HIV prevention and treatment for mothers and babies and protection of children from violence and exploitation.

iii.It is the world’s largest provider of vaccines, which works in the world’s toughest places and reaches out to the vulnerable and disadvantaged children.

i.World Children’s day (20th November) is UNICEF’s annual day of action for children, by children, it was first established as Universal Children’s Day.

ii.It is a part of UNICEF’s works to promote international togetherness and awareness among the children across the globe.

iii.The UNGA adopted the resolution A/RES/836(IX) on 14th December 1954 and proclaimed the 20th November of every year as Universal Children’s day.

UNICEF called out the governments to adopt the “Six Point Plan to Protect our Children” to reverse the effects of COVID-19 pandemic on children and to build a better future for all.