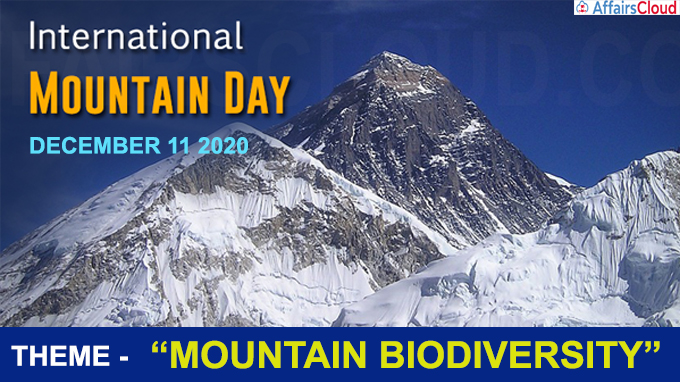 The United Nations(UN)’s International Mountain Day is annually observed across the globe on 11th December to encourage the sustainable developments in mountains and to create awareness about the importance of mountains to life.

The day highlights the difficulties and the opportunities in the development of mountains and to establish an alliance and enable positive change to the people living in the mountain and the environments across the globe.

The theme of International Mountain Day 2020 is “Mountain Biodiversity”, which aims to celebrate the diverse biodiversity of the mountain and address the difficulties they face.

iii.The idea of the international mountain day has its origin in the adoption of the document  “Managing Fragile Ecosystems: Sustainable Mountain Development” (Chapter 13) in 1992, as a part of the Agenda 21, at the UN’s Conference on Environment and development.

The Food and Agriculture Organization(FAO) of the United Nations (UN) conducted a photo contest as a part of the International Mountain Day celebration.

The conservation of mountains is a vital factor for sustainable development and it is also a part of the Goal 15 of the Sustainable Development Goals(SDGs): Life on land – Sustainably manage forests, combat desertification, halt and reverse land degradation, halt biodiversity loss.

i.The climate change and over exploitation of mountains poses a serious threat to the mountains.

ii.The increase in the global temperature will result in the melting of mountain glaciers at unprecedented rates which will affect the downstream supply of freshwater.

iii.The temperature increase due to global warming affects the survival of the mountain people.

v.Along with these, natural calamities, land use and land cover change increases the loss of biodiversity and weakens the environment for mountain communities.

i.The mountains are the source of around 60 to 80% of the world’s freshwater.

ii.These freshwater is fundamental to achieve global food security, since they are used in lowland agricultural regions.

iii.The mountains fulfills the everyday fresh water requirements of more than half of humanity which includes the world’s largest cities like New York, Rio de Janeiro, Nairobi, Tokyo and Melbourne.

i.The mountains provide the natural habitat for more than 15% of the world population.

ii.More than 90% of the world’s mountain dwellers live in the developing countries and majority of them live below the poverty line.

iii.In the developing countries, 1 in every 2 rural mountain people is vulnerable to food insecurity.

iv.The traditional and cultural practices and knowledge of the indigenous and local people who live in the mountains can contribute to the effective land management strategies.

v.Mountain tourism accounts for more than 15 to 20% of the global tourism industry.

i.The mountain hosts about 50% of the world’s biodiversity hotspots.

iii.The diverse topology of the mountains in the terms of altitude, slope and exposure supports the growth of a variety of high value crops, horticulture, livestock and forest species.

iv.Around 70% of the mountain lands are used for grazing and provides manures which enhances the fertility of the soil.

v.Potatoes, Maize, Tomatoes, Sorghum, Apples and Barley, the 6 out of the 20 important food crops originates in Mountains

The livestock genetic resource pool of the Pakistani mountain pastoralists has special traits bred into animals, like disease resilience.