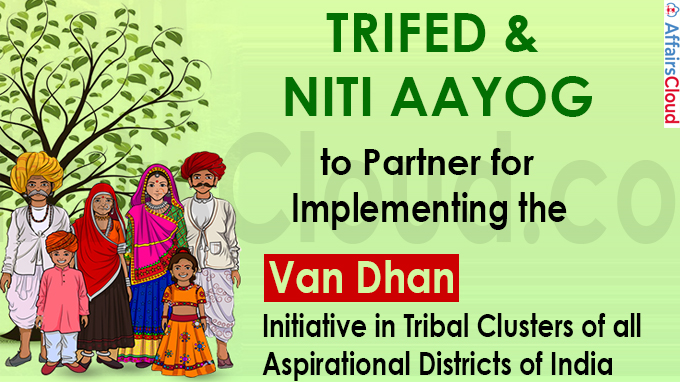 i.A dedicated team consisting of members from TRIFED and NITI aayog will be for implementation of Van Dhan Yojana in each of the 39 Tribal Aspirational Districts which are situated in the states of Andhra Pradesh, Assam, Chhattisgarh, Gujarat, Jharkhand, Madhya Pradesh, Maharashtra, Manipur, Meghalaya, Mizoram, Nagaland, Odisha, Telangana and Tripura.

iii. Through this partnership, NITI Aayog will support TRIFED in the concept of convergence (a collaboration between State & Central Governments, Development partners) for the VDVK Mission with Article 275 (1), DMF (District Mineral Foundations), and Scheduled Tribe Component (STC) of different ministries.

Van Dhan Yojna or Van Dhan Scheme
i.It was launched on 14th April 2018 and is implemented by TRIFED.Van Dhan start ups helps for the socio-economic development of the tribal population of the country to set up the Van Dhan Kendra.
ii.It is a component of the ‘Mechanism for Marketing of Minor Forest Produce (MFP) through Minimum Support Price (MSP) & Development of Value Chain for MFP’.
iii. The idea is to set up tribal community-owned Van Dhan Vikas Kendra Clusters (VDVKCs) in predominantly forested tribal districts.

April 30, 2021, TRIFED signed an MoU with The Link Fund, an Philanthropic operational foundation for empowerment of tribals.