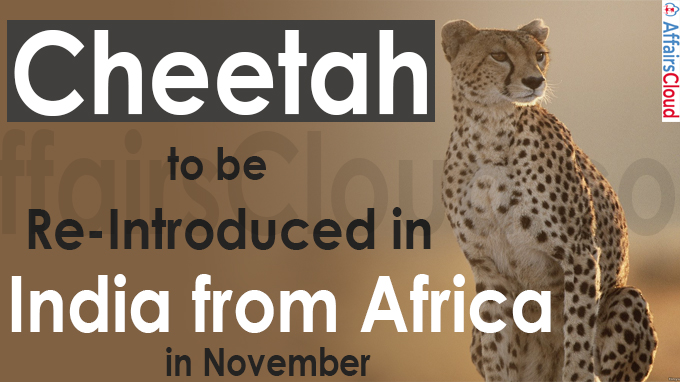 Cheetah, declared extinct in India in 1952 is set to be re-introduced into India in November, 2021 at the Kuno National Park, Madhya Pradesh (MP). It is the 1st time in the world that a large carnivore will be relocated from one continent to another.

i.In January 2020, the Supreme Court approved the proposal to introduce African Cheetah to a suitable habitat in India on an experimental basis.

It is located in the Chambal region of Madhya Pradesh and has a conducive environment for the Cheetah .

They are listed as ‘Vulnerable’ by the International Union for the Conservation of Nature (IUCN) Red List of Threatened Species, with a declining population of less than 7,000 found primarily in African savannas.

On December 21, 2020, Union Minister for MoEFCC Prakash Javadekar released the ‘Status of Leopards in India, 2018’ report, which states that India has recorded a 60% rise in Leopard population across India and it now has 12, 852 Leopards.

Madhya Pradesh recorded the most number of leopards.

About Wildlife Institute of India (WII)