“India Steel 2017”, the 3rd edition of International Conference and Exhibition on Steel Industry was held at Mumbai Exhibition Center in Mumbai from 19th-21st April, 2017. It was inaugurated by Union Steel Minister Chaudhary Birender Singh.

During the inaugural address, Mr. Singh mentioned about five thrust areas which Union Steel Ministry has been focusing since July 2016. These thrust areas have been summed up as 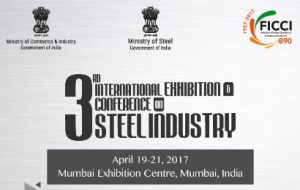 Overview of the Indian Steel Sector

The phenomenal growth in steel exports during 2016-17 was complimented by reduction in steel imports by 36%. As a result, India became net exporter of steel after a gap of three years.