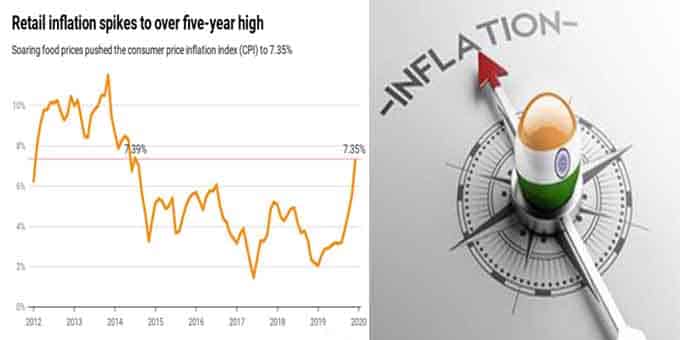 ii.Reason: Retail inflation was more affected in December due to high food prices. Food inflation rose to 14.12% from 10.01% in November 2019. In addition to vegetables, high prices of pulses, meat and fish also contributed to the highest level.

iii.Core inflation: While talking about the core inflation, it has increased 3.7% in December with the increase in rail freight rates and telecom rate.

iv.Earlier the CSO (Central Statistics Office) estimated the growth in real GDP(Gross Domestic Product) for 2019-20 at 5%.

Retail inflation:
It is the increase in the price of goods sold at retail market.In India, retail price is measured by the consumer price index (CPI),which is calculated by taking price changes for each item in the predetermined basket of goods and averaging them.

Core Inflation:
It is the change in the costs of goods & services but does not include those from the food and energy sectors.