On January 12, 2020, the United Nations(UN) inter agency group for child mortality has produced a report titled “Levels and Trends in Child Mortality”. As per this report India is among 5 countries where in 2018, the mortality of girls under the age of 5 exceeds that of the boys. Half of all under-5 deaths in 2018 occurred in the following five countries: India, Nigeria, Pakistan, the Democratic Republic of the Congo(DRC) and Ethiopia. 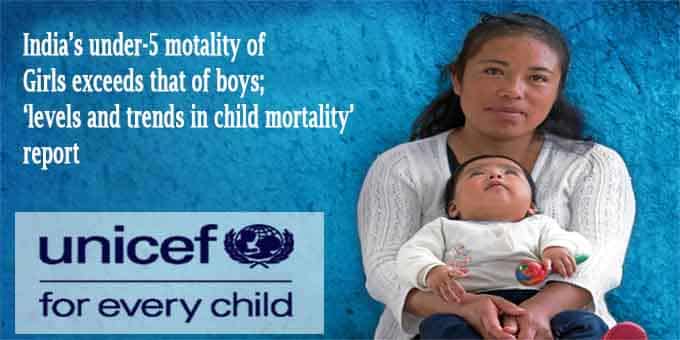 Levels and Trends in Child Mortality:

ii.Child mortality determination: The child mortality burden is determined by both  mortality rate (the proportion of children who die) and by the estimated population of any given State (total number of annual births).

iii.India’s 2017 SRS: As per 2017 Sample Registration System (SRS), Indian states of Madhya Pradesh, Odisha and Uttar Pradesh, with 32, 33 and 30 neonatal deaths per 1,000 live births, respectively, had the highest burden of neonatal mortality.

iii.Major neonatal mortality cause: The major cause of the neonatal mortality which is predominantly high in India are preterm birth, intrapartum related events, and neonatal infection and these result in diarrhoea and pneumonia, the major direct causes of death.

iv.Urgent need: Current trends predict that children in 5-14-year-old range, close to 10 million and 52 million children under 5 years of age will die between 2019 and 2030. Hence quick action is needed to tackle mortality rate.