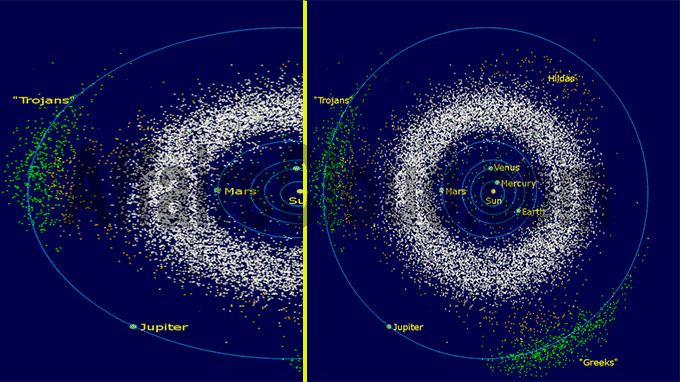 The Institute for Astronomy at the University of Hawaii’s Asteroid Terrestrial-impact Last Alert System (ATLAS) revealed the discovery of a rare asteroid called 2019 LD2 with a comet-like-tail among the Jupiter Trojans, moving in the same orbit as Jupiter moves around the sun.

i.Astronomers at ATLAS observed a rare space object last year in June 2019 giving a faint new signal that appeared to be an asteroid in the Trojan group sharing Jupiter’s orbit called Jupiter Trojans.

ii.Further observations confirmed the comet-like properties and in April 2002, researchers found that it still had a tail.

iii.This was the first time astronomers had ever seen a Trojan spewing out gas as a comet, 2019 LD2 is a ”first-of-its-kind” Trojan as most Jupiter Trojans were captured billions of years ago.

iv.It was observed to be between an asteroid and a comet and was called an active asteroid.

Theory 1: It was believed that Trojan asteroids have large amounts of ice beneath for decades their surfaces, but there was never any evidence .It is possible that now the LD2 collided with another asteroid and exposed the previously sealed ice leading to the tail and gas leak.

Theory 2: Suggests that LD2 was a stray asteroid to be captured by Jupiter from further out in the solar system where it is cold enough for ice to remain on the surface.

What is a Trojan asteroid?

Asteroids that follow same orbit like that of a planet, but remain 60 degrees ahead or behind along the orbit. Planets like Earth, Neptune and Jupiter have more than one Trojan asteroids.

ATLAS is an asteroid impact early warning system being developed by the University of Hawaii and funded by NASA. It consists of two telescopes, 100 miles apart, which automatically scan the whole sky several times every night looking for moving objects.
Project Head– Dr John Tonry