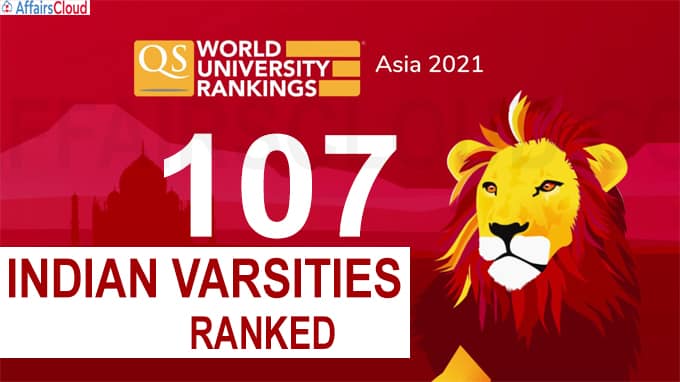 The global higher education think-tank, Quacquarelli Symonds (QS) has released the QS Asia University Rankings 2021 in association with King Abdulaziz University (KAU) , Jeddah (Saudi Arabia) for the Asia’s best higher education institutions in 2021. The ranking has been topped by National University of Singapore (NUS) for the 3rd consecutive year. On Indian front, three Indian Institutes of Technology (IITs) have made it to the top 50 viz. IIT-Bombay (37), IIT-Delhi (47) and IIT-Madras (50) but no Indian university got placed in top-10 list.

–Out of the 107 Indian educational institutions that were ranked, only eight institutions were among the top 100 of Asia.

–The reason of Indian institutes being behind other countries’ educational institutes is due to the research quality not matching its quantity.

–The teaching capacity and employability scores of Indian universities are also a reason behind the low rankings.

–On the research productivity front, six Indian universities are named in top10 of Asian institutes.

–It should be noted that in June 2020, the QS World University Rankings 2021 for higher education institutes across the world were released and no Indian institute had secured a position among the top 100 universities of the world.