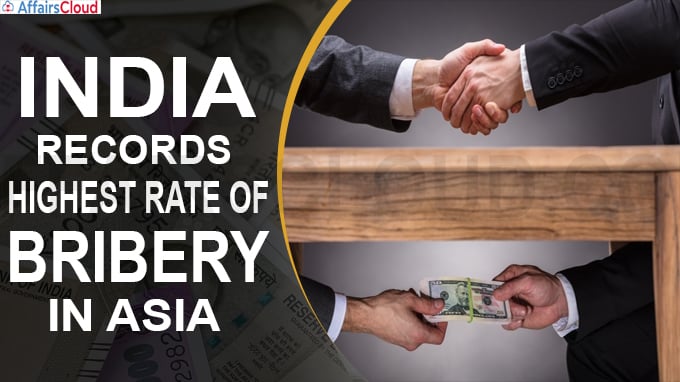 In accordance with the 10th edition of the report titled “Global Corruption Barometer (GCB)-Asia 2020” by corruption watchdog Transparency International, India has the highest bribery rate of 39% in Asia and the highest rate of people (46%) who use personal connections to access public services.

Key Points from Report with regards to India:

–47% percent people surveyed in India, believe that corruption has increased over the past 12 months while 63% believe that the government is doing a good job is tackling corruption.

–63% citizens in India think that if they report corruption, they will suffer retaliation

–89% think government corruption is a big problem, 18% offered bribes in exchange for votes and 11% experienced sextortion or know someone who has.

In several countries including India, Malaysia, Thailand, Sri Lanka and Indonesia, sexual extortion rates are also high and more must be done to prevent sextortion and address specific gendered forms of corruption

India had the highest rate of citizens using personal connections to access a service, at 46%, followed by Indonesia at 36% and China at 32.%. Conversely, in Japan and Cambodia, a small minority of those who accessed public services used their personal connections, only 4% and 6% respectively.

Use of personal connections: The highest & lowest

–Nearly one in five people (19%) or 836 million people paid bribe while accessing public services in the preceding year.

— Nearly 38% of people surveyed think corruption increased in their country in the previous twelve months, while another 28% think it stayed the same.

–More than one in five people (22%) who accessed public services used their personal connections to receive the assistance they needed.

— vote-buying was the highest in Thailand and the Philippines where 28% were offered a bribe in return for a vote, followed by Indonesia at 26%, India came fourth in the line with a rate of 18%.

— The results show that the highest sextortion rate is in Indonesia, where 18% of people experience sextortion or know someone who has, followed by Sri Lanka and Thailand, with sextortion rates of 17% and 15% respectively. India’s rate was 11%.

i.On October 22, 2020, Union Minister of State for Personnel, Public Grievances & Pensions, Jitendra Singh addressed the 1st Ever Ministerial Meeting of G-20 Anti-Corruption Working Group virtually where India has committed to the policy of Zero Tolerance against Corruption and Unaccounted money.

ii.On October 20, 2020, the 18th meeting of Prosecutors General of Shanghai Cooperation Organisation (SCO) Member States was virtually organized by the General Prosecutor’s Office of Uzbekistan from Tashkent where India was represented by Solicitor General (SG) Tushar Mehta. They agreed to strengthen cooperation in preventing and combating corruption.