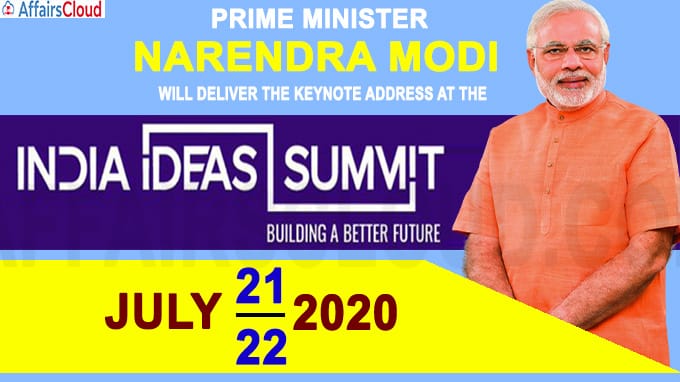 On July 22, 2020, Prime Minister Narendra Modi delivered the keynote address at the two days long (July 21-22) virtual India Ideas Summit 2020 which was hosted by US-India Business Council (USIBC) under the theme “Building a Better Future”. The year 2020 marked the 45th anniversary of the formation of the Council.

-The International Monetary Fund (IMF) has projected the global economy to contract by 4.9% in 2020 with India estimated to shrink by 4.5% during FY21 amid COVID-19. Still, India has attracted FDI (Foreign Direct Investment) of more than $20 billion in the April-July, 2020 period while pledged investments from the US have already crossed $40 billion this year.

-The Indo-US Joint efforts can play an important role in helping the global economy to recover from the COVID-19.

The US and India are negotiating a co-development programme for the air-launched unmanned aerial vehicle (UAV), between US Air Force research labs, Indian Air Force (IAF), India’s Defence Research and Development Organisation (DRDO), and an Indian start-up company. US want to become India’s first choice in defence solutions.