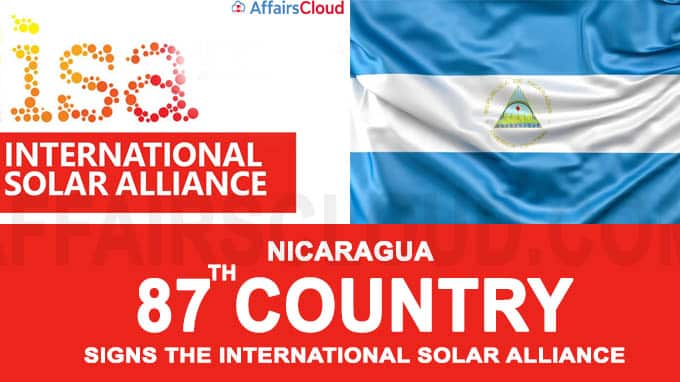 On 23rd July 2020, The Republic of Nicaragua became the 87th country to sign the International Solar Alliance(ISA) Framework Agreement, an initiative to promote sustainable energy, led by India.

E. Jaime Hermida Castillo, Permanent Representative to the UN of the Republic of Nicaragua, signed the Agreement at the Permanent Mission of India to the United Nations, New York.

ii.The initiative aimed for the implementation of the Paris Climate Agreement through development and deployment of solar energy.

i.The agreement was opened for signature during the 2016 United Nations Climate Change conference held in Morocco on 15th November 2016.

ii.The ISA amended the Framework agreement in 2019 to enable membership of all the countries of the United Nations.

iii.This inclusion of UN countries to the alliance has included solar energy in the global agenda.

iv.The expansion in membership has increased the global benefits of the initiative.

v.Out of the 87 signed countries 67 countries have also ratified the ISA Framework agreement.

i.The Republic of Mali awarded the Project Management Consultancy (PMC) contract for the development of a 500 MW solar park in Mali to NTPC Limited.

ii.The Union Ministry of New and Renewable energy (MNRE) proposed the ‘One Sun One World One Grid’ (OSOWOG) to interconnect renewable energy by sharing solar resources with more than 140 countries of West Asia and SouthEast Asia.