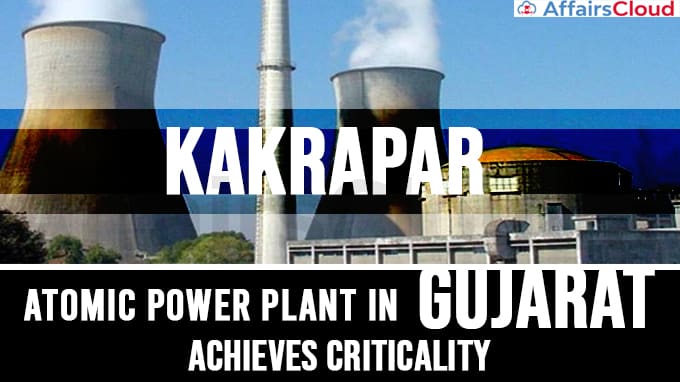 i.KAPP-3 is India’s 23rd nuclear power reactor that is completely designed and built by India.

ii.The design and construction of the reactor is made with highest safety and quality standards in comparison to the best reactors in the world.

iii.The reactor uses natural Uranium as the fuel and Heavy water as moderator.

iv.The components and equipment of the reactor are manufactured by the industries in India and the construction was undertaken by multiple Indian contractors supporting the “Make In India” initiative.

vi.By Mid-March 2020, the fuel loading of the reactor core was completed and following the COVID-19 guidelines, tests and procedures were conducted in the period of lockdown.

vii.The power will be increased progressively after further tests and experiments and the unit will be connected with the western grid.

i.For the original contract value of Rs.844 crore NPCIL awarded the reactor building contract of both KAPP-3 & 4 to Larsen & Turbo.

ii.The construction started in November 2010 and was expected to commission by 2015.

i.Currently 4(KAPP-3&4 and RAPS-7&8) units of 700MWe reactors are being built in Kakrapar and Rawatbhata.

ii.KAPP-3 is forerunner of the series of 16 indigenous 700 MWe PHWR, which got the approval and financial support from the government of India.

iii.The 16 projects are under various stages of implementations. India will increase the nuclear power capacity from 6,780 MWe. to 22,480 MWe by 2031.

iv.As of January 2020, The nuclear power capacity constitutes less than 2% of the total installed capacity (3,68,690 MW)