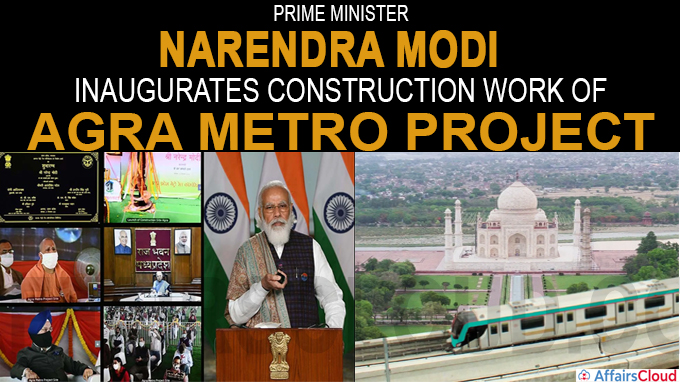 On December 7, 2020, the inauguration ceremony for the construction work of Phase-1 of the Agra Metro project in Agra, Uttar Pradesh (UP) was held at 15 Battalion PAC parade ground in Agra. The project was virtually inaugurated by Prime Minister (PM) Narendra Modi in the presence of Union Minister Hardeep Singh Puri, Ministry of Housing and Urban Affairs (MoHUA), Chief Minister (CM) of UP, Yogi Adityanath, and UP Governor Anandiben Patel.

–The first metro train will run on the six-km priority section from Taj Mahal to Jama Masjid.

–According to the detailed project report (DRP), the distance between Sikandara and Taj East Gate corridor will be 14km and comprise 13 stations.

–Notably, The metro rail will cover 1km in two minutes. Means the distance which takes one hour by road will reduce to half an hour.

–This metro project was inaugurated by PM in March 2019 along with the commencement of commercial operations of Lucknow Metro on 23 km long North-South corridor from Chaudhary Charan Singh (CCS) International Airport to Munshipulia in Lucknow.

–The Central Government has processed the development work of cities at 4 levels viz. Resolution of long standing problems, Ease of living, Maximum investment, More use of modern technology.

–Work on the 1000 km long metro lines is in progress in 27 cities all over India.

i.On August 17, 2020, Ministry of Home Affairs (MHA) approved the renaming of Manduadih Railway Station in Uttar Pradesh (UP) as ‘Banaras’.