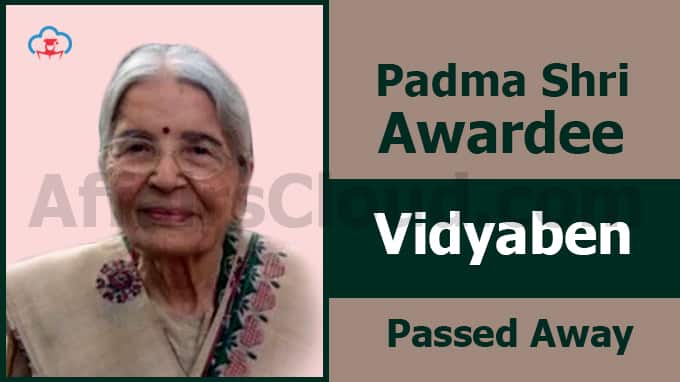 On June 19, 2020 Padma Shri awardee & National Awardee, Freedom fighter & Social worker, Vidyaben Shah passed away around the age of 97 in her residence in New Delhi. She established India’s 1st Bal Bhavan in Rajkot in the 1940s. She was born on November 7, 1922 in Gujarat.

i.Vidyaben Shah served as the 1st Honorary Magistrate for Juvenile Courts in Rajkot from 1948 & held this post for 8 years.

ii.She became the President of Bal Sahyog in 1966 and held the post for 10 years.

iv.She was the 1st non-official head of the New Delhi Municipal Council in the 1970s.

v.She also served as the chairman of the Central Social Welfare Board from 1985 to 1988 & was the President of Delhi Gujarari Samaj for over 40 years.

vi.She was the key person to establish one of Delhi’s most renowned schools, Sardar Patel Vidyalaya and the Triveni Kala Sangam, a premier institution for training in dance, music and painting.

vii.She was also a lead to set up the Mahatma Gandhi Sanskritik Kendra in the 1970s.

Facts about Vidyaben Shah- She participated in the Quit India Movement.

i.Padma Shri award in 1992 for her long tenure of social and economic welfare work.

ii.National Award in 1986 by Govt of India for outstanding services in the field of child welfare.

iii.Woman of the Century Award (Shatabdi Mahila) for social work spanning the entire lifetime in 2000.

iv.The Plaque of Honour of Indian Council for Child Welfare (ICCW) in 2002 for “Fifty Golden Years of Service to the Children of India”.

v.Kalpana Chawla Excellence Award for excellence in the field of social service in 2006.

vii.National Award by Govt of India in 2011 for “Lifetime Achievements and Contributions”.