On February 29, 2020, PM Modi visited Uttar Pradesh (UP) to attend several programmes in Chitrakoot and Prayagraj. 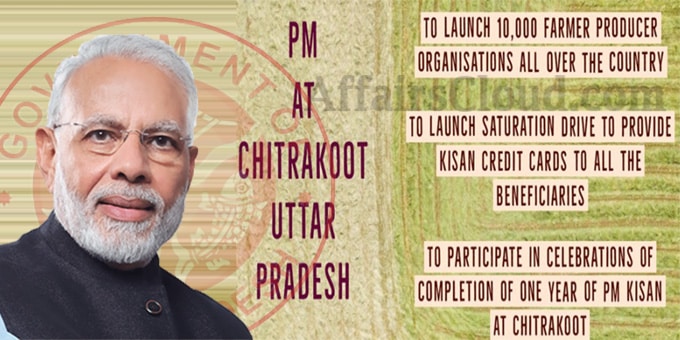 PM launched 10,000 farmers producer organisations (FPOs) all over country at Chitrakoot
Prime Minister Narendra Modi also launched 10,000 farmers producer organisations (FPOs) all over the country at Chitrakoot to provide quality seeds, fertilizers and pesticides as well as requisite finances to small and marginal farmers. FPOs will also help achieve the dream of Gram Swaraj that promotes conversion of every village into a self-efficient autonomous entity where all the systems and facilities for a dignified living are available.The government would spend Rs 5,000 crore in the next five years to strengthen FPOs for the benefit of farmers. FPO will facilitate farmers sell their produce against best prices.

Completion of one year of launch of PM-KISAN scheme
The PM-KISAN scheme has completed one year which was launched on February 24, 2019. The Modi government had launched the Pradhan Mantri Kisan Samman Nidhi (PM-KISAN) scheme as an income support scheme for farmers to enable them to take care of expenses related to agriculture and allied activities as well as domestic needs. Under the scheme, benefit is provided to the eligible beneficiary to the tune of Rs 6,000 per year. It is payable in three 4-monthly instalments of Rs 2,000 each.

PM Modi Launched KCC cards
The prime minister also launched a saturation drive for distribution of Kisan Credit Cards (KCC) to all the beneficiaries under the PM-KISAN Scheme. Over 6.5 crore of the approximately 8.5 crore beneficiaries under PM-KISAN Scheme possess Kisan Credit Cards. The saturation ensured that the remaining about 2 crore PM-KISAN beneficiaries are also distributed KCCs the statement said. KCC provides provide loans at minimal rates.More than 2000 bank branches in rural areas have been tasked with providing the KCC card to the farmers. Farmers can get up to Rs 3 lakh loan at 4% interest. The government has set an estimate of Rs 20,000 crore which will be utilised to sanction loan to KCC cardholders.

About ADIP Scheme
The main objective of the Assistance to Disabled persons for purchasing / fitting of aids / appliances (ADIP) scheme to assist the needy disabled persons in procuring durable, sophisticated and scientifically manufactured appliances that can promote their physical, social and psychological rehabilitation. The scheme is implemented through implementing agencies such as the NGOs, National Institutes and ALIMCO (Artificial Limbs Manufacturing Corporation of India)-a Public Sector Undertaking (PSU) under the Ministry of Social Justice and Empowerment.

About Rashtriya Vayoshri Yojana
Rashtriya Vayoshri Yojana is scheme for providing Physical Aids and Assisted-living Devices for Senior citizens belonging to BPL category. This is a Central Sector Scheme, fully funded by the Central Government. The expenditure for implementation of the scheme is being met from the “Senior Citizens’ Welfare Fund”. The Scheme is being implemented by ALIMCO.

ii.Infrastructure to strengthen warehouses and Food processing units has also been expanded.